Hancock Tips His Hat to BC Bell’s THE BAGMAN!!

TIPPIN’ HANCOCK’S HAT-Reviews by Tommy Hancock
TALES OF THE BAGMAN by B. C. Bell
Cover by Laura Givens

I don’t get it…I really don’t. 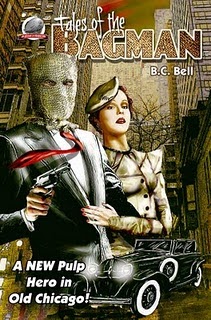 I had heard rumors prior to reading this book that someone out in the great wasteland we call the internet reviewed this book introducing The Bagman, a character created by BC Bell, and that reviewer said that he/she/it didn’t see much here to get excited about, that this was Bell’s attempt to do his version of Batman.

What I really don’t get is just what book that person was reading!!  This is not any attempt to rework The Dark Knight or any other character for that matter.  The Bagman does have his roots planted squarely in many long time concepts used to design pulp (and comic) heroes.  That is part of his appeal.  What Bell does, though, is tweaks and twists the old standards just enough that Frank ‘Mac’ McCullough, the former gangster who becomes the grass roots hero in 1930s Chicago, stands out as a fully realized character who, although he undergoes a sort of transformation when he wears the bag, stands on his own as a conflicted, yet dedicated human figure.

The cover art and interior art not only compliment the stories and the book as a whole, but the styles of Everaert and Givens compliment each other, adding a beauty and depth to this book that only adds to the impact of each tale told.

Speaking of tales, there are three that make up the Bagman’s debut.  Let’s talk about them, shall we?

THE BIRTH OF A BAGMAN is literally that, the origin of how small time hood Frank McCullough moves from crime to crimefighter.  Bell takes his time in this tale, letting the reader get to know and like Mac before it’s ever really clear what’s going to happen to him.  Throw in Crankshaft, one of best supporting characters I’ve seen in a long time and this story is nothing but golden.  By itself, Five out Five Tips of the Hat.

THE BUGHOUSE MASSACRE is essentially The Bagman’s next step in the plan he develops in the first story-to rid his neighborhood of the Mob by eliminating them both professionaly and physically if he has to.  This story is just what it should be, a great follow up, a good introduction of other characters, and more building on who The Bagman is.  The intenstiy level on this one isn’t quite amped up as much as the first, but by the time Bell gets the reader to the incident referred to in the title, it doesn’t slow down a bit.  Four out of Five Tips of the Hat.

Finally, we have BIG CITY, BIG SHOULDERS.  Of all the three stories, this one, although good and wound up well and tight by the end, struggles in the beginning.  It felt as if Bell wanted to tie up several loose ends and introduce some things all in this story and although he does just that and all is well told by the end, following the actual direction the story is going is difficult in about the first half.  What Bell does do, however, is tie The Bagman forevermore into his city of Chicago.  The tour the reader is taken on through McCullough’s eyes is riveting and lets you know that The Bagman and Chicago are made for each other.  Three out of Five Tips of the Hat.

Taking all that into consideration and giving a definite Five out Five to the art and design of this book, BC Bell’s TALES OF THE BAGMAN clearly is destined to be a book someone looks back on and says ‘Batman’s got nothin’ on this guy!’