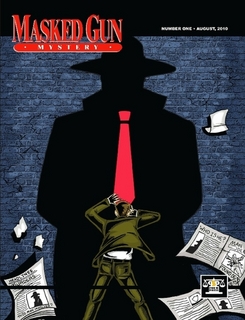 Any pulp fan worth his or her salt knows that the pulps flourished for decades in magazine form before giving way to the booming paperback market after WW2. Thankfully we live in an era where classic pulp fiction is back with a vengeance and us pulp fans couldn’t be happier. Whether reprints of classic tales are your thing, or new pulp yarns from today’s top purveyors of purple prose, there’s one thing that’s been missing from this pulp resurgence: pulp magazines. Sure, online mags abound, but where are the new print magazines at these days?
Well, Pro Se Productions has answered that question with the launch of 3 new pulp magazines for today’s audience. One of these is Masked Gun Mystery, the first issue of which is the subject of this review.
The first issue of Masked Gun Mystery doesn’t mess around. You get an impressive 90 pages of pulp excitement in a well laid-out, large (8.5 X 11) format and features 8 mystery stories. There’s something for everyone here as the issue contains tales set in the modern day as well as the 1930s. Let’s break down each story.
The issue kicks off with “The Things He Leaves Behind” by Aric Mitchell. The tale deals with the tragic consequences of domestic violence and is a great kick off to the issue. Although I found the story overly long, the subject matter was handled well and the mystery kept me reading.
“Hello New Life, Hello Old” by Ken Janssens introduces us to reluctant private eye, Aloha McCoy. This tale is also set in the modern day and was entertaining start to finish. Plucky McCoy’s search for a missing rich-kid is memorable and the brisk pace of the tale makes it one of the standouts.
Aaron Smith’s “The Day He Found The Clown” is a nice change of pace from the first two tales which were longer yarns. Here we’ve got a former hockey player turned police detective on the trail of a clown’s murderer. Picard, saddled with celebrity from his playing days, is trying to embrace his new life dedicated to helping those in need. The dialogue is crisp and the action captivating in this one. Another standout.
“Dineena’s Dilemma” by Lee Huston, Jr. flings us into the future on an alien world where we meet private detective Hugh Monn. I found this tale to be low on plot but high on gadgetry. Flying cars, robots, alien life forms all contribute to an interesting and promising setting although the mystery itself is not all that mind-bending. There’s promise here and the tale, at a mere 9 pages, is a quick, somewhat enjoyable read.
Tommy Hancock checks in with a period piece set in 1929. “Murphy’s Wake” is a cop tale of corruption, vengeance and honor told in an offbeat, engaging style through the use of newspaper reports, journal entries and live action. The deft mixture of styles makes for a great read and the pacing is white hot.
It’s back to the modern day for C. William Russette’s “Demon Night” or is it “Dragon Night”? It’s listed as ‘Demon’ in the table of contents and ‘Dragon’ in the story itself. I really enjoyed this tale as it featured a very memorable protagonist and a set up that begs for future instalments. I don’t want to spoil any of the fun here by revealing too much. Let’s just say that the tale is a shoot-em-up you don’t want to miss.
There’s no way I can objectively review the next tale as it is my contribution to the issue. So I hope you’ll settle for a quick recap of the story’s plot. “Run” by Andrew Salmon is set just after the end of WW2 and tells the tale of recently discharged Clark Logan looking to put the horrors of war behind him. Instead he stumbles into a mess of trouble that has him running for his life from start to finish.
The issue closes with a trip back to 1989 courtesy of Robert E. Kennedy. “Crime Of The Arts, Part One” is this issue crowning glory. I ripped through this tale like it was nobody’s business and experienced intense aggravation (the good kind) when I got to the end. You see, it is the first part of a serial and a great one at that. Kennedy gives us a modern day pulp hero that is instantly relatable and likeable, a relatively modern day avenger bad guys do not want to mess with. This is a must read although you might want to wait until you have more instalments to read before scorching your eyes across this one lest you be left storming the Pro Se offices for Part Two.
And there you have it. For only $7.50, Masked Gun Mystery #1 is sure to satisfy even the most discerning pulp fan. With a great mix of vintage, modern and futuristic tales, every reader will have their favorite. The tales are trussed up with spot illustrations from artists Armando Rillo, Fernando Sosa, Peter Cooper and Fuller Bumpers. This first issue also sports a moody cover by John A. Palmer IV.
So do yourself a favor and experience pulps the way they began, as magazines. Masked Gun Mystery delivers, schweetheart.
Share