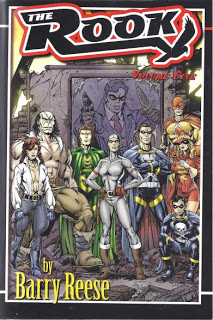 This is easily one of my favorite on-going pulp series.  The Rook, an based avenger a new pulp hero who, over the course of his four previous outings, has battled some classic pulp villains and teamed up with well known 30s heroes along the way.
Note, this is not a novel, as the Rook’s adventures generally run in lengths of ten to fifteen thousand words and each volume is a collection of four or five of these long tales.
This one follows that format and offers up four new Rook thrillers and wraps with a bonus story by writer Stacy Dooks.  I’m going to “hazard” a guess and say this is the first Rook story ever penned by someone other than Reese and it’s really very good, adhering a great deal the established style Reese created for this series.
The recurring theme of this collection focuses on the Rook establishing a new team of heroes he christens the Claws of the Rook, and they include a pastiche female Phantom type warrior known as the Revenant, who leads them.  Others include a master of the  mystic arts, ala Doctor Strange, the Frankenstein monster who is, in this incarnation, a decent fellow named Vincent and the Golden Age comic book battler, the Black Terror, to name a few.  During the course of the book they go up against some of the Rook’s old foes such the Warlike Manchu and Doctor Satan while being challenged by new evils ala a wooden fiend known as the Stickman and a resurrected vampire Hitler seeking to rebuild the Third Reich.
As you can see by these colorful personages, these are off-the-wall pulp exploits in the finest sense.  There are times when Reese spends a little more time on the new team then he does with his principal hero and all too often, despite their myriad talents and powers, the group can’t seem to win any decisive battle without his coming to their rescue.  Obvious the challenge here is when to shine the light on the Max Davies, the Rook’s secret identity, and when to actually let him take a back seat.  The few times this doesn’t work properly makes for awkward sections that slow down the pacing a bit.  But that’s a truly minor flaw in what is another excellent entry into this fun series.
And Dooks tale starring the Rook Jr. is a really nice bonus to the entire package.  If you are a Rook fan, you won’t be disappointed.  If you aren’t, then time to get on the pulp bandwagon and discover this truly excellent series.
Share