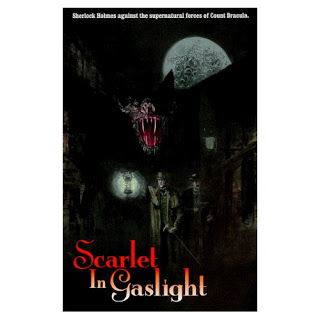 Martin Powell, renowned Pulp and Comic Author got a mention in the Washington Post recently for his well known work SCARLET IN GASLIGHT.  The article is reposted below, with appropriate credits and links provided following!!

Friday, October 29, 2010
Like Bela Lugosi, his most famous incarnation, Dracula refuses to retire. From his first appearance in Bram Stoker’s 1897 novel to his latest cameo in a Halloween candy commercial, the king of the undead still haunts our imagination. Because the sleazy old reprobate just won’t die, here are three good ways to get to know him better.
1 The New Annotated Dracula , by Bram Stoker, edited by Leslie S. Klinger (Norton, $39.95) Renowned as the encyclopedic editor of the three fat volumes of “The New Annotated Sherlock Holmes,” Klinger opens up Stoker’s text with irresistible glee, supplying countless marginal notes, illustrations, photographs and other juicy tidbits. Along the way, he plays what Sherlockians call “the Game,” pretending that Stoker’s account is true. In doing so he not only provides a feast of details but also creates a shadow text that would have amused Vladimir Nabokov in “Pale Fire“ mode. Stoker’s slapdash errors become oversights and perhaps deliberate falsifications. Literary inspirations become historical antecedents. And at the center of this devout playfulness is a handsome, authoritative text for Stoker’s original novel – so you get two books in one.
2 Scarlet in Gaslight , written by Martin Powell, drawn by Seppo Makinen (a four-book series of graphic novels from Eternity Comics, originally $1.95 apiece or in single volumes, apparently all now out of print but easily available on-line). Stoker’s “Dracula” is available in countless editions, and since its publication countless other authors have exploited the vampire-in-chief’s undying appeal. Often fans of Victoriana have united Dracula and Sherlock Holmes – and of course Dracula has played Jack the Ripper. One entertaining and surprising take on such a dream team appears in this series, which has been reprinted in a single volume more than once. Powell’s florid story and Makinen’s elegant draftsmanship create a vision of Dracula more satisfyingly cinematic than many of the movies, and almost inevitably give both him and Holmes a super-villain and -hero look, which seems appropriate.
3 Vampire Forensics: Uncovering the Origins of an Enduring Legend , by Mark Collins Jenkins (National Geographic Society, $25). This is a nonfiction book to take you behind the scenes of Dracula tales. A frequent contributor to National Geographic publications, Jenkins has written a lively and entertaining survey of the historical and scientific materials relating to the natural phenomena that earlier centuries relentlessly misinterpreted as evidence for the undead. What were people seeing – or what did they think they were seeing – that led them to theorize that their Great-aunt Helga had returned from the grave to dine on her kin? These ideas didn’t blossom out of nowhere. Jenkins looks at allegedly eyewitness accounts, examines the revelations of contemporary pathologists and explores how one might explain the other. He has a lot of fun. I wish this book had existed last year, when I was writing about this topic myself.
– Michael Sims bookworld@washpost.com