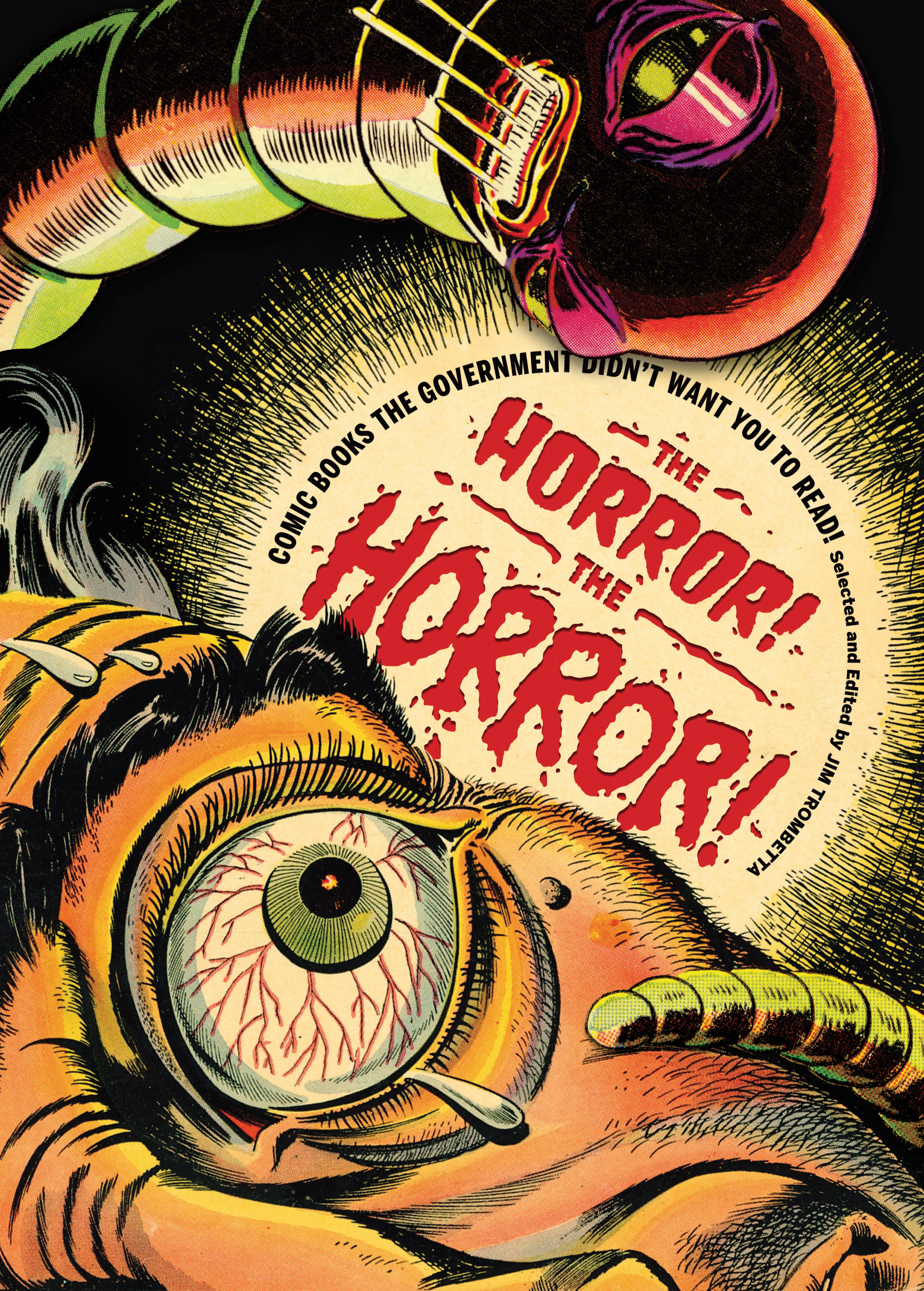 The Horror! The Horror! Comic Books the Government Didn’t Want you to Read]]]
By Jim Trombetta
Abrams ComicsArts, 304 pages, $29.95

Comic book fans certainly know enough history to understand that the comics industry bowed to public pressure and created the Comics Code Authority to clean up its image. It resulted in countless professionals losing their livelihoods and publishers dropping like leaves during autumn. We know that it also shuttered the great EC horror comics and forced [[[Mad]]] to evolve from comic book to magazine.

But just how horrid were these stories? Were the drawings that graphic and lurid to cause parents to ban them from the house? Was Dr. Fredric Wertham right that they contributed to psychological disease? Was Senator Estes Kefauver correct in considering the comics a cause of juvenile delinquency?

A few years back, we got David Hadju’s nicely researched [[[The Ten Cent Plague]]], which gave us the tenor of the times but now we have Exhibits A-Z. Jim Trombetta has carefully researched hundreds of comic books and organized them by theme to present modern day readers with a glimpse into the past. The Horror! The Horror! is an oversized, handsome package that lets us clearly look at the artwork and read a handful of the stories to give us a sense of what terrified the populace during the 1950s.

Comic books evolved rapidly in the wake of World War II’s conclusion. Readers no longer needed super-heroes to defend the American way, but they craved entertainment so new genres sprouted up including the western, romance, and crime comics. Horror titles grew in importance and became a prevalent genre found on newsstands. Every publisher used different standards in terms of the quality of the writing and artwork and just how graphic their horror can get.

Overall, despite familiar names here from Charles Biro and Don Heck to Lee Elias and Steve Ditko, much of the work here is pretty bad. The artwork is generally poor and the writing overwrought or poorly constructed. As a result, Trombetta’s thoughtful essays probably give these lost titles a little too much credit. In a style that is engaging and scholarly without being dry, he breaks the horror titles down into categories including [[[The Magic Code]]],[[[ the Werewolf]]], [[[The Dead Don’t Die]]], [[[The Hunger]]], [[[The Grin]]], and [[[Death and the Maiden]]] among others.

Each section features a variety of covers to illustrate his point with credits where the talent is known and offers up a sample story or two to show how the theme played out back in the day. From today’s perspective, a lot of these images are run-of-the-mill or tame, but viewed through the prism of a conformist American society, these were unseemly concepts, not at all appropriate for the children.

The book is a wonderful time capsule to an era that would have collapsed under its own weight had Congress butted out. Proving the point is the bonus DVD, included with the book. After the hysteria died down and the Code came in and cleaned house, [[[Confidential File]]] aired a special on the threat of these comics. The October 9, 1955 is an alarm signaled after the fact and a cultural curiosity, nicely restored and a real treat.

Overall, the book does a fine job exploring what all the fuss was about, making it a fine companion to Hadju’s history.