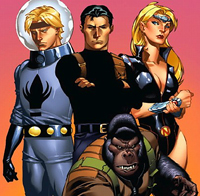 When Disney bought Marvel, the movie rights to the majority of their big-name properties were tied up. They still are. But now that writer Jeph Loeb is head
of Marvel television, he’s been pitching a bunch of properties to ABC-TV, which, of course, is owned by Disney. You might have heard that The Incredible Hulk is in development – which is not the same as being green-lighted. That’s kind of remarkable as Mark Ruffalo, movie’s third Bruce Banner, has been signed to do three Avengers movies as well several Hulks.

But that doesn’t mean they can’t do television at the same time. I think Ed Norton’s chance at going green again is only slightly better than Bill Bixby’s, but Ed’s extremely talented and, hell, I don’t have to work with him.

There’s two more Marvel properties on the short list: Cloak and Dagger, which is presently sans comic book, and The Punisher, who is three movies shy of being a star. Maybe the small screen is a warmer environment.

But that’s just the tip of the iceberg. Heroes for Hire is being kicked around;
this show would focus on Luke Cage; I don’t know if Iron Fist would be in it.
But “Heroes” IS plural. His comic book wife, Jessica Jones, is on the list with
her own show. It can’t be called Alias, so they’ve titled it Alter-Ego. This should not be confused with Roy Thomas’s character of the same name, nor his monthly fanzine of the same name.

Jack Kirby’s The Eternals is being considered. Even with CGI I don’t see this being as strong in live action as it would be in traditional animation, but I doubt ABC has the guts to do that. Stepping out of the pages of Marvel’s recent mega-crossover, The Hood is on the list. I guess ABC needs a nice family-oriented show starring a ruthless villain. Everybody’s favorite private eyes, Colleen Wing and Misty Knight, are on the list under the title Daughters of the Dragon. If they can cast the right sexy babes, this one is a shoo-in. Not so much the other two on the list.

ABC is looking at Ka-Zar. I don’t know if the teevee world is ready for the return of Tarzan, but my guess is that if it is, it would be looking for a show called “Tarzan.” Finally, there’s Agents of Atlas. Marvel just cancelled this title, which pisses me off because I love it. Is the world ready for a talking gorilla, a guy from Uranus, and a female Sub-Mariner? Well, this is an election year.

Mind you, even though ABC and Marvel are both owned by Disney, the network is not obligated to pick up any of these shows and most certainly will not pick them all up. But it would be kind of fun if they picked up a couple so they can do Marvel-style crossovers.