OUT OF THE DARK
By David Weber
Tor Books
381 pages 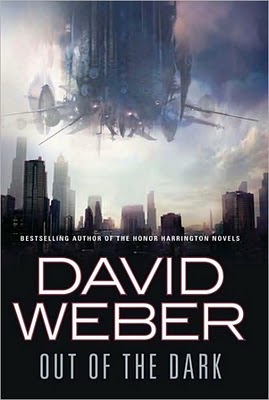 Alien invasions are nothing new to both the science fiction and fantasy genres. Books like H.G.Wells WAR OF THE WORDS and Ron L.Hubbard BATTLEFIELD EARTH have all demonstrated the horrors of such a catastrophic event. In reading David Weber’s OUT OF THE DARK, it is impossible not to recall these previous exercises in intergalactic terror and the penultimate B-movie experience of INDEPENDENCE DAY.  They are all evoked wonderfully throughout this gripping adventure.

The plot is direct enough. The setting is the very near future, by only a few years. A warrior race known as the Shongairi have been given the permission of a space United Nations known as the Galactic Hemegony to invade and subjugate the Earth, based on early exploratory by other races of the Hemegony. Their reports indicated the planet’s inhabitants were a savage race and as the majority of the alien council was made up of peace loving beings, the Shongairi seemed the perfect choice to handle the Earth situation. Early on in the story, the commanding officer of the invading fleet espouses his own theories on the politics behind his people having been granted this so called privilege. He full suspects the Hemegony are hoping the Earthlings will prove difficult to the point of inflicting enough damage to weaken the Shongairi thus making them easier to handle. The Hemegony are all too aware of the Shongairi’s unbridled ambitions to expand their empire.

Of course the commander and his officers consider this a ridiculous idea as their own hubris is blinding them to the fact that all their previous victories were of Class One civilizations with no technology to speak of. Whereas the Shongairi scouting probes report the Earth has developed to a Class Two status to include nuclear capabilities that suggest other technological advances, particularly in military fields. Still, having never known defeat, the Shongairi launch their invasion by bombarding the Earth’s major capitol cities and within hours decimate a quarter of the world’s population.

Weber is a skilled military writer and he describes the destruction from outer space clearly and economically. Then he begins to introduce us to several strong willed individuals throughout the world who will be the book’s protagonists. A couple of former marine survivalists living in the mountains of South Carolina, an African American Marine Sergeant trapped in Romania with a handful of soldiers, a Russian engineer from Moscow and a U.S. Navy fighter pilot who manages to shoot down the Shongairi troop shuttles within mere hours of their attack. It is his actions that set the tempo for the remainder of the book, as his effective retaliation is the first actual loss the enemy aliens have ever encountered and all too soon pockets of human resistance begin popping up everywhere, striking back at the invaders with effective armament the likes of which they had never encountered before.
Weber lays it on fast and furious all of which leads to a dead road culmination for the Shongairi. If they cannot successfully defeat the human race, then they will merely retreat and bomb the planet to oblivion.

The question then becomes, will the humans survive and is there any way they can possibly turn the tables and actual defeat the invaders? Therein lays the resolution that caught me by surprise because for the most part the book is science fiction and Weber’s solution strays afar into that other genre we alluded to earlier. In a way that some readers may not appreciate and I can sympathize with them. On the other hand, I was delighted with it and applaud Weber for having the literary bravado to pull it off, particularly in his being able to subtlety play on the book’s very title with that particular climax.

Bottom line, OUT OF THE DARK is a terrific read that had me from the first page and kept me enthralled to the very last. If you are willing to have fun with fiction of this type, then hang on and enjoy the ride. It’s a wild one.