Derrick Ferguson reviews one of the best westerns made in the last twenty years at THE LONG MATINEE!

I think it’s really a damn shame that Tom Selleck never became as big a movie star as I think he solidly deserved to be. He got jerked out of playing Indiana Jones and despite whatever you may have heard from that friend of yours who knows all about movies or that other friend who claims he knows the “real story” Tom Selleck was the first choice of both George Lucas and Steven Spielberg for Indiana Jones.

Tom Selleck did have a solid movie career, though and he did some really good stuff that I liked a lot. He got to do a couple of 1930’s adventure films such as “Lassiter” with Jane Seymour in which he played a cat burglar operating in London just before WWII and “High Road To China” where he played a boozy barnstorming pilot helping Bess Armstrong find her father who’s been kidnapped by a Chinese warlord. He also did more than his share of westerns and if your cable/satellite provider carried TNT then you know what I’m talking about. During the 90’s it seemed like every other week there was a new western starring Tom Selleck featured on that station. But he did one major feature western that has gone seriously unnoticed: QUIGLEY DOWN UNDER.

Matthew Quigley (Tom Selleck) is a cowboy/sharpshooter from who travels to with his trusty weapon: a modified 1847 Sharps Buffalo Rifle with which he can hit a man from 1200 yards away. That may not sound impressive but as a way of reference let’s put it this way: the modern football field is 100 yards long. You do the math. Quigley’s been hired by a wealthy and powerful landowner, Elliot Marston (Alan Rickman) for a job. He doesn’t say what the job is but he’ll pay Quigley 50 dollars in gold just to make the three-month trip to his ranch just to hear him out. Quigley finds Marston to be a refined gentleman obsessed with The American West. He even has a matched pair of Navy Colts that he’s become expert at using. Marston is also a sadistic racist who wants Quigley to use his sharpshooting skills to help in cutting down the Outback aborigines. Quigley’s response to this job offer is to kick Marston’s ass. 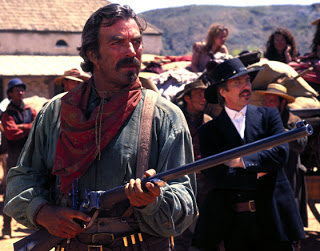 He would have been much better off just saying no and going on back home. He’s beaten half to death, taken out to the unforgiving desert and dumped along with Crazy Cora (Laura San Giacomo) a woman Quigley has befriended. For some reason Crazy Cora thinks that Quigley is her husband Roy and part of the fun of the movie is that we’re never sure exactly how crazy Crazy Cora really is as even Quigley says to her at one point: “The scary thing is that from time to time you actually make sense.” Quigley and Cora are rescued by aborigines and that sets up the second half of the movie as Quigley goes after Marston and in the process becomes a legend among the aborigines known as ‘The Spirit Warrior’. He also learns the tragic history of Crazy Cora and why she became crazy.

QUIGLEY DOWN UNDER is rarely mentioned when even western fans get together and I don’t know why. It’s got Tom Selleck who is one of the few modern actors who actually looks as if he belongs in The Old West. He’s a worthy successor to Randolph Scott and Joel McCrea, both of who would have slid into this role like you slide into your favorite jeans. He’s tough when he has to be in his scenes with Alan Rickman and tender in his scenes with Laura San Giacomo. Selleck has studied his westerns and he knows that in a role like this less is more. He says only what he has to say and no more. It’s a great old school performance.

Laura San Giacomo is totally terrific. She has to carry the load of being the only comic relief in the movie and she does it by creating a character that has us constantly wondering: “is she really crazy or just playing crazy?” Even covered in dirt she’s mad sexy and she has two really great scenes: one where she softly tells Quigley what happened to make her crazy and the other is where she spends a horrifying night defending an aborigine baby from a pack of dingos. 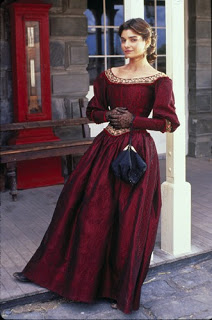 Alan Rickman is wonderful as Elliot Marston and if you expect to see him playing Hans Gruber In A Western, think again. Rickman’s too damn good for that. Marston’s a separate bad guy and he and Quigley make for wonderfully matched opponents. It helps that Rickman and Selleck look as if they’re having just as much fun going up against each other as Rickman and Willis did.

What else can I mention? Oh, yes…the simply magnificent score by Basil Poledouris. If you don’t know the work of this master then shame on you. And for QUIGLEY DOWN UNDER he composed one the most heroic, rousing scores I’ve ever heard for a movie. The location work is beautiful and really gives you a sense of how big is. There’s a scene where Quigley has been already traveling four days to get to Marston’s and asks one of Marston’s men when will they get to his ranch and the man responds: “You’ve been on it for two days.” The look on Quigley’s face says it all. I would have liked to see more of the aborigine way of life but hey, the small bits we do see where they teach Quigley how to find water in the desert and how he teaches them how to lasso are fun and even charming.

So should you see QUIGLEY DOWN UNDER? I give thee a resounding “YES”. If you’re a fan of Tom Selleck in particular or westerns in general then you really ought to do yourself a favor and see this one. It’s got a solid story, some terrific action sequences and strong acting. QUIGLEY DOWN UNDER is a movie that belongs in the library of every movie fan.