Character currently written by MIKE BULLOCK, Profile completed by Silk Kirby
1. The Black Bat’s secret identity is…?
In case you missed the operative word in the question, it’s a secret. That’s why they call it a “secret identity”, my good man. (ALL PULP has it on good authority that Anthony Quinn, former District Attorney, is highly suspected of being the Black Bat.  However, whatever proof that may have existed to prove this fact…no longer exists.)

2.  In five sentences or less, The Black Bat’s origin is…? 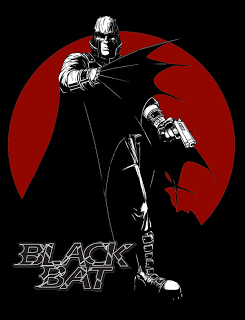 He was a good man, who worked hard to bring justice to this lawless town. Then they assaulted him, took his sight and nearly broke his soul. But, he’s a fellow of indomitable will and instead of giving up as lesser men would, he re-made himself into a weapon – one made to take the war to their doorstep. Now he uses their own tactics against them – treachery, intimidation and terror. God help them…

3.  The Black Bat’s first appearance was…?
That night long ago, in that warehouse with Snate’s men. I’ll never forget it… and neither will
they. (July, 1939, Black Book Detective)

4.  The Black Bat’s most recent appearance is…?
He should be dropping in on Viper’s men any time now. (Moonstone’s current BLACK BAT Comic, a part of Moonstone’s RETURN OF THE ORIGINALS line.)

5.  The 5 (at most) most important people in the Black Bat’s life are…?
Miss Baldwin, fer sure. And Butch O’Leary, Butch is a good egg. Then there’s that strange guy, Langston Rockwell – he kinda gives me the creeps. And, I guess I’m in there. Silk Kirby’s the name. I’m his right-hand man. 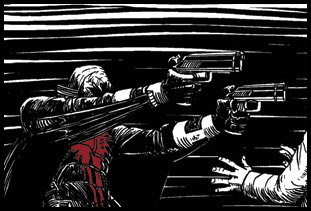 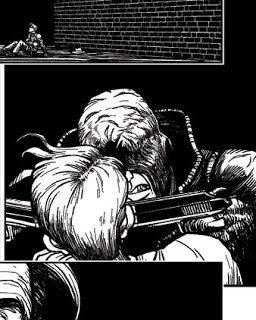 “Top villains”? I guess they mighta thought they was at the top of the world, that is before the boss got to ‘em. Snate was one, fer sure. You might say that crooked cop, McGrath is one, too. And, Viper…

9 Any existing characters the Black Bat has met/had a crossover with include…?
There’re all characters when you think about it…

10.  The Black Bat’s greatest fear is…?
The boss has no fear. I swear, never seen a guy with such little regard for his own safety.

11.  The Black Bat’s favorite food is…?
I know he’s partial to Italian food.

12.  If the Black Bat couldn’t be there to save the day, the person he would pick to take his place would be…?
No one. The Boss’ed never want anyone else in harm’s way.

13 Free-for-all-Say anything, in ten sentences or less, you want about The Black Bat?
Well, I used to walk on the wrong side of the law. But, once the boss got hold of me, he gave me a chance, saw sumthin’ in me no one else ever did, not even my parents. He brought me back, taught me how to fight the good fight and always do what’s right.

14. Links for more of the Black Bat include…?
Links? Like chain? You sure do ask strange questions…(Start with www.moonstonebooks.com!)
Share