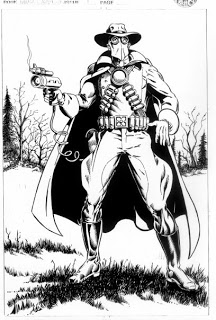 Los Angeles, CA – Pulp 2.0 Press CEO Bill Cunningham today announced that the company is launching a line of what he calls “pulp graphic novels” for digital and print distribution.  The company begins this new line of pulp entertainment media by licensing the publishing  and media rights to the 1980’s indie comic book serials THE MIRACLE SQUAD and THE TWILIGHT AVENGER created by writer John Wooley and artist Terry Tidwell.

THE MIRACLE SQUAD was originally published as two 4-issue miniseries by  Upshot Graphics  and later, Apple Comics.  The first serial chronicles the adventures of a team of 1936 movie studio professionals who take on the mob bent on ‘acquiring’ their poverty row studio as a means of money laundering.  The team uses their unique skills in props, stunts, makeup, escapology and acting to uncover the leader behind the ‘hostile takeover’ and give him his two-fisted comeuppance. Cunningham is quick to say that, “The Miracle Squad is akin to today’s A-TEAM only set in 1930’s poverty row Hollywood. It’s fun, outrageous and jam-packed with all sorts of pulpy goodness.”

The second Miracle Squad serial  BLOOD AND DUST features the adventures of the team when they tackle a group of land thieves capitalizing on the infamous ‘Dust Bowl’ crisis of the 1930’s.  Set against the backdrop of the Oklahoma range, the movie studio adventurers go head-to-head against poverty, exploitation and cross-burning klansmen.

THE TWILIGHT AVENGER is the story of a college student Reece Chambers who uses an arsenal of super-scientific gadgets to seek revenge against the criminals who ran down his fiancee and left her in a coma.  Unknown to Chambers is the fact the criminals are led by a masked villain known only as The Centipede. Originally launched by Elite Comics, the series was later published by Eternity Comics and featured zombies, mad scientists and even time travel.

“Both titles reflect the action-packed pulps, cliffhanger serials and B-movies of the 1930’s — the era which also inspired retro movies like THE ROCKETEER and THE INDIANA JONES series,”  said Pulp 2.0 Press MPB (Mad Pulp Bastard),  Bill Cunningham.  “John Wooley and Terry Tidwell captured that dynamic era within the pages of their comic achieving the perfect blend of the heroic daring of the serials with the real-life drama of the 1930’s Depression.  I remember reading both comics in the 1980’s when they were first published, and after I began building Pulp 2.0, I sought John and Terry out to see if their work was available. Their retro-styled comics are a perfect fit for our readers.”

After several emails and phone conversations, Cunningham licensed the rights to bring back the duo’s comic creations for both print and digital readers.  While the books design style is still in the beginning stages of development, the company is approaching both Miracle Squad and Twilight Avenger as ‘pulp properties that look appropriate to their source material.’  As Cunningham says, “Pulp isn’t a particular medium, it’s an attitude.”  Since both titles were obviously influenced by poverty row adventure cinema of the 1930’s it makes sense to keep and try to amplify that aesthetic.  Miracle Squad and Twilight Avenger  are both terrific stories and our audience deserves to read them in uniquely designed collected editions in whatever format they choose. This is the approach we have taken with our first book, BROTHER BLOOD by Donald F. Glut as well as our soon-to-be-released RADIO WESTERN ADVENTURES which features a ‘lost’ short stories by Glut and legendary DOC SAVAGE creator Lester Dent.”

To that end, Pulp 2.0 is digitally ‘cleaning up’ the original pages for both  Miracle Squad and Twilight Avenger and compiling many bonus “behind-the-scenes” features for the print editions. The bonus features will include design sketches, notes, script pages and essays. “We take our time in the design phase and try and come up with a few special surprises for our readers,” said Cunningham.  “Our goal is to create collectible editions that are easily available online.”

John Wooley, the writer / co-creator of Miracle Squad and Twilight Avenger had this to say: “No one loves pulps and the whole idea of classic pulp fiction more than I do, and our first  phone conversation made it clear to me that Bill Cunningham was a kindred soul who not only shared that love, but also knew exactly how to get the Twilight Avenger and the Miracle Squad to a wider audience than they were ever able to reach during their initial runs.  F. Scott Fitzgerald famously wrote that there were no second acts in American lives. Terry and I are so pleased that,  thanks to Pulp 2.0 Press,  our ’30s heroes and heroines are going to be an exception.”

Both ‘pulp graphic novels’ are scheduled to begin release in 1st quarter 2011.  More details will be made available as they develop. Please visit the Pulp 2.0 website at http://www.pulp2ohpress.com/.

For more information or to arrange an interview please contact Bill Cunningham at the information at the top of the page.

Pulp 2.0 is a publishing and media company that creates and distributes quality pulp entertainment media in every manner possible for its audience all over the world to enjoy. The company licenses, redesigns and republishes classic pulp, exploitation paperbacks and magazines through a variety of print and digital media; breathing new life into many of these ‘lost’ properties.