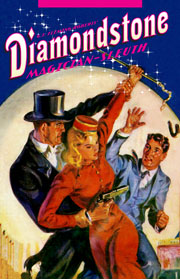 AP: Matt, thanks for taking the time out to visit with ALL PULP. To kick this off, can you share some personal/professional background about yourself?
MM: Sure, I’m a web/graphic designer who’s worked in publishing for a number of years. In the past, I’ve put this art background to use doing artwork reconstruction work for Marvel, DC, AC, Disney, etc., for their various golden- and silver-age reprints.
But I’ve always loved pulps and I thought I could do at least a serviceable job in making attractive pulp reprints that matched their “cousin” hardcover comic reprints that Marvel and DC are doing.
AP: You are the head man behind Altus Press. What is Altus Press in terms of what it produces and its mission and purpose?
MM: Honestly, it’s to produce the books that I’d like to personally have on my bookshelf. That doesn’t just mean producing a collection of, say all the Secret Agent X stories just because I want them, but making them the de facto place to get these classic stories. In this case, all the Secret Agent X stories have been reprinted in one place or another, in one format or another, over the course of nearly 50 years. So my hope is that my Secret Agent X volumes will allow fans to toss out all those mis-matched reprints they already have–whether they’re the 60s Corinth paperbacks, Hanos digests, Bill Blackbeard photocopies, PDFs, etc.
In addition, I want to share with as many people as are interested all the interesting pulp stories that I’ve encountered, and there seems to be an endless supply of such material. The more I learn, the less I know, as the saying goes.
AP: Altus Press is well known for its collections of reprinted material, a lot of it thought long lost to the public at large. Can you give us a list of what characters you’ve got in your stable of reprints? 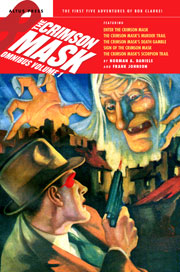 MM: Certainly. I try to do a healthy mix of “done in one”-type collections as well as multi-volume series. Some of the characters include Ravenwood, Mr. Death, Diamondstone, Doctor Death, Johnny Saxon, Ka-Zar, Ki-Gor, Jim Anthony, Polaris, Secret Agent X, Armless O’Neil, Seekay, The Bat, The Black Bat, The Cobra, Sheena, Senorita Scorpion, The Griffon, The Crimson Mask, Red Finger, The Man in Purple, The Black Hood, The Secret 6, The Purple Scar, The Blond Adder, Thunder Jim Wade, and many, many more that are on their way.
AP: What is the process you went through to gather these stories? Is everything you’re reprinting public domain?
MM: No. I generally tried to focus on PD material when I started, but in recent years, I’d say it’s about 50% PD, 50% licenced.
The process on each title is different. Sometimes a final product is quite clear to me, such as my recent Diamondstone: Magician – Sleuth book. In that case, it was very straightforward: there were only six stories and together, they filled out a nice 250-page book. There weren’t any other related stories from the author, G.T. Felming-Roberts, that made sense to include. So that book only took a matter of weeks to finish.
Other books take much longer to complete. My recent Norvell Page detective anthology, When the Death-Bat Flies: The Detective Stories of Norvell Page, has taken over a year to finish. It collects over 30 stories, and I only owned two of them. So it took quite a while to track all those down at finish that 800-page book. And there are other books that I’ve started but am looking for additional pieces to add to flesh them out. Some of these have been in this state for several years.
AP: What about new stories based on existing characters? Is this an area Altus Press works in? What titles?
MM: We do some new material here and there, but since other publishers like Airship 27 do a lot of that, I’ve focused on mainly reprint material. But I will recommend everything that Tom Johnson has written for Altus Press… he’s a pro and everything is a solid read. He’d done full collections such as the book Pulp Detectives, and he’s filled the lion’s share of our semi-regular anthology, Triple Detective. He’s also done new stories to augment reprint material such as in The Hand of Red Finger and The Man in Purple. And he’s got more on the way!
I hope that we’ll also do new material by other authors in the future. 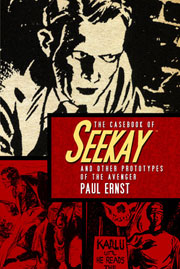 AP: In dealing with new stories based on old characters, what is your opinion on modernizing/changing them to possibly appeal to a broader readership?
MM:  Well, since I don’t do a lot of new material, I don’t have much to say on it. But a lot of these long-running characters, such as Doc Savage, The Black Bat, The Phantom Detective, etc., all changed and grew within their original pulp runs. If they were published non-stop from the 1930s to now, something tells me editorial & buying tastes would have changed these characters anyway. So as long as the changes don’t make the characters unrecognizable, I have no beef with updating things.
AP: How about all new original characters in the pulp vein? What original characters has Altus Press published?
MM: I’ll just say this: look for news on this in the future.
AP: Yet another line that Altus Press has is its pulp companions/histories. What is the importance of providing these published histories to the modern reader and overall, why is pulp history relevant?
MM: There’s a lot of pulp scholarship that was written in the 1970s-80s in fanzines such as Echoes, Pulp Vault, etc., which deserves to be made more available to the public. These are great fun to assemble, as they’re like a puzzle to put together… what articles & content could/should be collected under one cover on a certain topic? These are the books I’ll frequently pull out to browse through for enjoyment.
Pulp-reading is, by its nature, an insulated group. By that, I mean it’s tough for a person to learn about a character/topic/theme without having to refer to multiple sources to get a thorough history. We shouldn’t force people to do homework. So I think making my Companion books available is a solution for those fans who wish to learn more about a topic… after all, there’s not a top of information on most of these characters online. 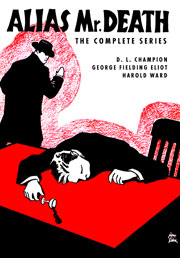 Additionally, many of these books revolve around series which were written by multiple authors under a house name. A lot of time has been spent on attempting to identify writers, and I felt it was important to make that research available. The next generation that wants to dig deeper on IDing authors will appreciate having this information in easy-to-reference editions, I’d reckon.
AP: You’re a publisher and a lot of pulp publishers are also writers? What about you? Are you a writer and if so, what is your general interest as an author?
MM: No, I wish. I’m not a good writer, so I’ll leave that to the people who are.
AP: Altus Press obviously deals with multiple pulp characters. Are there any you haven’t worked with/researched enough/been involved with in some way that are on your to-do list?
MM: Not really. I’ve published Lester Dent which was a dream come true. If anything, it would be great to have a hand at publishing an authentic Doc Savage or Shadow original story and have it considered part of cannon.
AP: It obviously doesn’t seem like you or Altus Press have anytime soon to slow down. Any further projects you can discuss?
MM: There’s plenty in various stages of completion now. The Page Death-Bat book I mentioned earlier is almost done. That’ll make 1200 pages of Norvell Page that I’ve done in just a couple of months. 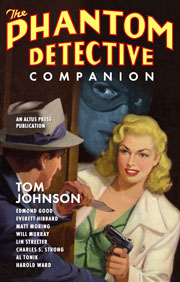 I’m just about finished with another companion book, this being The Dime Detective Companion, which reprints a pretty cool story: the fifth anniversary story (from 1936) “The Tongueless Men”. What makes it cool is that it’s written in round robin style, with five of Dime Detective’s most popular writers at the time–William E. Barrett, Carroll John Daly, Frederick C.Davis, T. T. Flynn and John Lawrence–writing a chapter apiece. And it’s up to the reader to figure out who wrote which chapter! It’s pretty fun and it’s never been reprinted before.
I’ve also got my reprinting of the complete series of The Green Lama coming out soon. While I’ve spaced out my previous multi-book series reprints, I’m going to be putting these out in succession, across three volumes. So Green Lama fans won’t have to wait too long for the next books.
I also have a pair of books collecting the adventures of The Suicide Squad coming… two books containing six stories each.
Several more Companion books from Tom Johnson, such as The Black Bat Companion and The Dan Fowler Companion, as well as another collection of Tom’s new stories.
Another multi-book reprint series starring Richard Knight by Donald Keyhoe.
A special Phantom Detective anthology… Doc Savage fans will really enjoy this one!
And last (but certainly not least) is a collection of Paul S. Powers western material, about half of which is comprised of unpublished manuscripts. It’s going to be a great book.
And that’s just the next few months! There’s plenty more down the road. And I’d like to add that these would be impossible to do without the help of so many kind people in the pulp community, among them Tom Johnson, Will Murray and Ray Riethmeier… without their help, our books would be much weaker products.
AP: We can’t thank you enough for being with ALL PULP today, Matt!
MM: Thanks for having me. I’m pleased to see so many regular updates on All Pulp; it makes for frequent visits!
Share