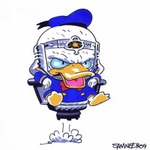 So the mouse is eating the spider. What does it all mean?

Poke around the Internets and you’ll see a lot of hysteria. Comics fans aren’t happy; they’re worried Disney will Disnify the whole thing. Movie fans are worried the Marvel flicks will have all the weight and depth of your average Disney movie. Theme park fans are concerned about Universal losing their franchise just so Ant-Man and the Wasp can fit into “It’s A Small World After All.”

Calm down. Assuming the deal gets approved by Marvel’s stockholders – which is likely – and the government – which is likely but not as certain – contracts are contracts and Disney would rather spend the next five years buying other things than paying for litigation. Paramount will still release those next five Marvel Films films, Universal will continue to maintain their current lifespan (however long that might be) with the Marvel rides and that fat lady who’s knocking the poo out of Captain America’s winged head in those commercials, and the comic books will continue to be published.

Marvel’s been trying to pattern itself after the Disney business model for at least the past four or five owners, so it’s no surprise that the House of Mouse took preemptive measures. Disney can’t mess with their theme parks right now – I mentioned the contractual obligations and, quite frankly, business ain’t what it used to be. The Disney characters and the Marvel characters are not a good theme park fit: the latter are not grandmother-friendly.

I doubt Disney will interfere with publishing very much, at least not in the short run. They have a very bad track record in the publishing fields, and the racks are littered with their cancelled product. They’re in the licensing business; that’s what they do and what they know. If the overall comic book publishing field continues to deteriorate they might do what they did with their other product and simply license it all out. It would be wonderfully ironic if Mark Waid’s Boom Studios gets the franchise, and I’ll bet you Mark feels the same way.

If there are any changes, they are likely to take the form of a reorientation of the Marvel characters towards the teen-age male market. Disney is weak in that demographic and can use some bolstering up. And bringing Marvel Comics back to the teen-ager friendly arena isn’t necessarily a bad thing. It worked for Lee and Kirby and Ditko and Thomas and Buscema; today there are more than enough really good writers and artists to address that market in a contemporary manner.

So I don’t think we’ll see Doctor Doom threatening The Little Mermaid. Don’t hold your breath for that Sinister Seven Dwarves movie. The Hulk probably will not stomp Goofy. Stan Lee will not be frozen and placed on the shelf next to Walt Disney and Jim Henson. All that’s a pity. Disney has no sense of humor. Just ask the Air Pirates.

The fact is, big business has never, ever been able to understand the American comic book industry. We defy the Harvard MBA mentality, and I’m proud of that. If DIsney does what Disney does best and the publishing business doesn’t implode, nobody will notice a thing. The Avengers 3 will make more money than publishing could lose.

Unless Dean Jones is cast as Nick Fury.

A 33 year veteran of the comic book industry, Mike Gold is ComicMix’s editor-in-chief. Portions of this blather appeared in today’s The Point podcast.