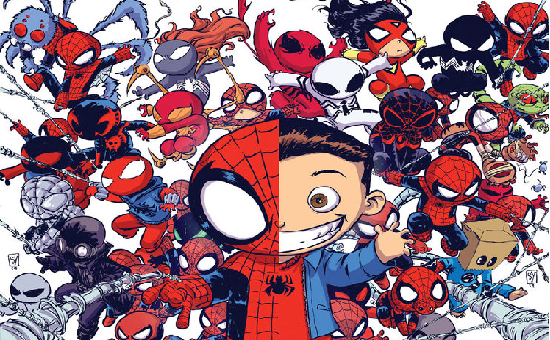 Several decades ago the American comics medium in general – and Marvel Comics in specific – were criticized by some in fandom for being overly formulaic. I realize it is possible for a few fannish souls to overreact, but I have to admit there was an element of truthiness in their concern.

Today we can clearly see a contemporary incarnation of this issue. Not that plotlines are being rubber-stamped; slavish adherence to ever-shifting continuity undermines such creative shortcuts. No, today we are suffering from a different sort of redundancy: overexposure to such a degree that most truly successful superhero characters have become akin to amoebas.

I was just thumbing through the sundry Diamond catalogs announcing comics and related effluvia ostensibly set to ship this coming February. Out of convenience and a desire to meet my deadline, I am going to focus on Marvel’s output – but DC, and to a lesser extent other superhero publishers, are also guilty of sequential overexposure.

This coming February, Marvel is supposed to be shipping (in the unlikely event that my math is correct) no less than three Captain Marvel books, seven Avengers titles, four Deadpools, seven X-Men, three Inhumans titles, six featuring the Guardians of the Galaxy…

… and no less than fifteen titles featuring Spider-Man and his Spiderverse. Fifteen. Back when people were criticizing Marvel for recycling plots, they didn’t publish fifteen different titles a month! I guess that’s pretty damn good for a character that can’t even hold onto a major movie franchise.

Of course, the sundry Spideys also appear in various Avengers titles, as do most if not all of the aforementioned properties. And many of the other Avengers like Iron Man, The Hulk, Thor, and Captain America have their own titles as well.

It is true that this sort of thing has been going on for a long, long time. Maybe not quite as long as it may seem to geriatric fans who recall Superman appearing in seven different titles in the late 1950s (Superman, Action Comics, Superboy, Adventure Comics, World’s Finest, Lois Lane, and Jimmy Olsen), but only two of those were published monthly. The rest were published bi-monthly or every six weeks. Still, five titles a month is a lot. Fortunately, continuity was weak at best and if you had an aversion to pill-box hats you could safely avoid Lois Lane (and her omnipresent scissors) and still understand what was going on in the other titles.

However, we have not previously seen such character redundancy to this degree. Not even when the original Captain Marvel and his family were featured in eight different titles back in the 1940s. Not all were monthlies, although the Big Red Cheese did see his own book go out every three weeks for a spell. Then again, in February at least two Spider-Man titles double-ship, and, for the record, February 2016 only has four ship weeks. It’s pretty rare that Leap Year Day falls on a Wednesday.

So, why is this a problem? Well, if you’re a massive Spider-Man fan, it might not be. However, ComicMix columnist Emily S. Whitten is a proud Deadpool fan, but having a job, a life, and a commitment to writing one of the best comics and pop culture columns on the Interwebs, so even Emily has a hard time keeping up with the nutty merc.

This is a problem because it undermines the uniqueness of the character. It’s called overexposure. We used to have three or four Punisher titles; in February 2016 Marvel won’t be releasing a single one.

Sure, as I said, all this goes for DC as well. They’ve been pushing Batman titles out as though they were Cheerios, and they out-X-Men the X-Men by having several thousand different characters all named Green Lantern.

At least Image only produces one Bitch Planet a month… and that’s on a good month. A very good month, in my opinion, but your mileage may vary.