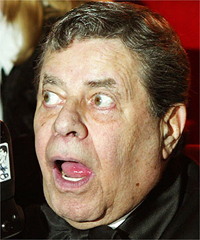 Is there a single person on the planet who could actually make me feel sorry for that walking train-wreck, Lindsay Lohan? Well, as it turns out, there is!

Just before his 60th Muscular Dystrophy Telethon this weekend, 84 year-old Jerry Lewis discussed Lindsay Lohan specifically and some of his fellow craftspeople generically on the syndicated teevee gossipfest Inside Edition. “I think they need a fucking spanking and a reprimand,” Jerry Lewis said.

Wow, Jerry.
So you want to spank a 24 year-old woman, huh? Well, I understand a lot of old geezers feel that way.
Okay, so you’ve got a father complex. But exactly what sort of father do you want to be? One who beats his kids?

Zeroing in on Lohan, Jerry Lewis went on to rant “I’d smack her in the mouth if I saw her. I’d smack her in the mouth and be arrested for abusing a woman.” Gee, Jerry, ya think? By the way, you’d also go down for assault and battery. And probably hate crime. “I would say ‘you deserve this and nothing else.’ Whack! And then if she’s not satisfied, I’d put her over my knee and spank her.”

If she’s not satisfied?
Is that how you satisfy women, you sad pathetic has been?

Hokey smokes, Jerry! And to think Mel Gibson got his badass self in trouble while you get to go on teevee and act condescendingly toward your children.

Lohan’s got enough of her own problems, and Jerry, so do you.