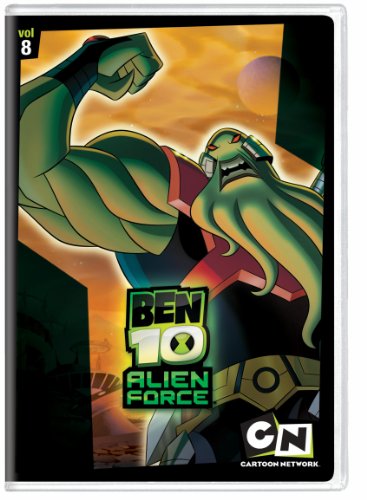 I had missed out on the [[[Ben 10]]] phenomenon and wasn’t even sure what it was about despite colleagues of mine creating it and friends writing for it. Recently, someone described it to me as Dial H for Hero except he dials up alien lifeforms. Ah!

, on sale Tuesday, for review. The six episodes contained within are from the latter half of the second season so by now, the show has become a rich, fully populated reality. Diving in, it took a little while to figure out the players and relationships but given the 22 minutes per episode, they couldn’t get overly complex anyway.

The series, which concluded in March to make way for the next generation, [[[Ben 10: Ultimate Alien]]], which debuted in April. I’m not sure how the characters and situations worked out when they were initially depicted as five years younger than the teenagers they are here, but suspect things play better now that the trio – Ben, his cousin Gwen, and their friend Kevin – now have greater experience to draw upon for their exploits.

The set includes “If all Else Fails”, “In Charm’s Way”, “Ghost Town”, Trade Off”, Busy Box’, and “Con of Rath” (this cleverly titled final one is oddly listed as a bonus). They show the comic book roots of the creators with a nice variety of new threats, old threats, character arcs, and differing tones. One was written by Peter David, who has previously visited this world with the DelRey graphic novel [[[Ben 10 Alien Force: Doom Dimension]]] and there’s a freshness to his dialogue that sparkles while Len Wein’s effort felt more predictable.

Other than Kevin trying to reverse his physical condition back to normal, there are few status quo changing elements here so for newbie’s like me, these episodes were engaging since they focused on the action. There’s a nice blend between the human antics of the teens, the growing closeness between Gwen and Kevin along with the role Grandpa Max plays. Charmcaster proved Gwen’s most interesting challenge and in this sextet of stories, she is probably the most underutilized character. Apparently the world is somewhat comfortable with aliens given their frequent comings and goings although you don’t get a real feel for that/ Nor do we understand if these kids go to school at all and if they have friends beyond one another, elements worthy of exploration.

The animation is strong and the alien designs are imaginative and don’t feel like they all came from the same shop, much as the Hanna-Barbera stuff began to exhibit a sameness after a while. The vocal cast is also well done so the entire package is eminently entertaining and therefore recommended.

The sole extra on this disc is an Alien Database that provides exceptionally brief details on the common alien races seen throughout the series.