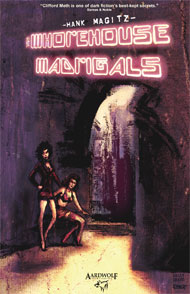 Clifford Meth is not a nice guy.

That doesn’t mean he’s not a good guy. Anybody who puts as much time as he has helping out comic book creators in need, like William Messner-Loebs, Dave Cockrum, and most recently Gene Colan, is clearly a decent human being (and yes, he’s also written things for ComicMix in the past).

But he’s not a nice guy. He’s clearly spent a certain amount of his life contemplating what Nietchze had in mind when he spoke of the abyss. He’s a card-carrying Neutral Good. He’s passionate, acerbic when needed, and his writing has a taste like sulfur and gunpowder.

Which brings us to the new short story collection, [[[The Whorehouse Madrigals (of Hank Magitz)]]] from Clifford’s publishing house, Aardwolf Publishing.

I tried to not be the guy here reviewing it, I consider Cliff a friend and didn’t want the conflict of interest. But two people I handed it to wrote back and said that the book just wasn’t for them. The hasteed to point out the book wasn’t bad, but definitely not to their taste. I couldn’t argue with them.

Now that said, I think it’s a funny book. But if the title isn’t a tipoff, it’s not a book that can be shared with your maiden aunt. Think of the tone of these stories as like Harlan Ellison, but mean. James Thurber this ain’t.

To give you an idea, here’s an adaptation of one of the stories inside, “Korean Math”– and for ghu’s sake, it is in no way safe for work. But if you have a black sense of humor, you’ll like it. Following a frustrating “massage incident,” author Hank Magitz calls
Charles Windsor-Smith, his publisher, to complain…