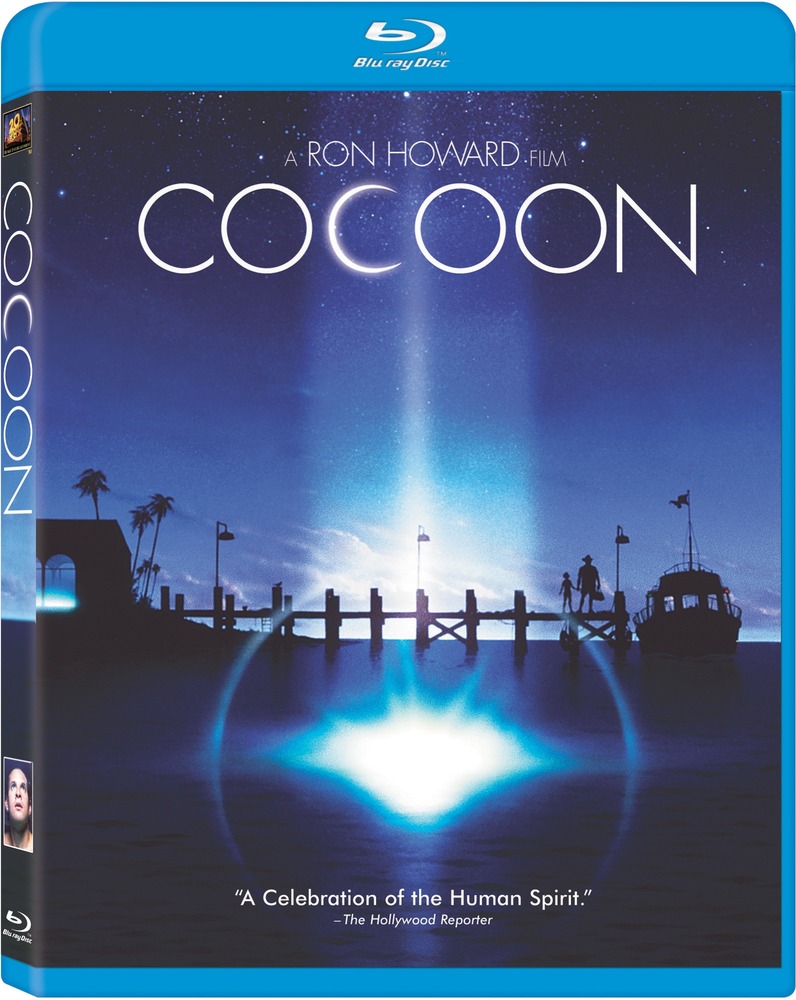 Ron Howard was a beloved child actor who showed some directing chops with [[[Splash]]], a fantasy-themed comedy but he truly showed that he was a director to be taken seriously with his follow-up, 1985’s Cocoon

. The movie was light-hearted, but a drama, which immediately showed his range. Additionally, Howard worked with a collection of veteran actors and he coaxed terrific performances from them all, resulting in Don Ameche’s Supporting Actor Oscar.

The movie is referenced now and then but has largely slipped from the collective consciousness, which is a shame, because it’s a nice story, well told, and worth seeing again. 20th Century Home Entertainment has released a 25th anniversary edition on Blu-ray and interestingly, rather then now-common combo pack, this a single Blu-ray disc retailing for the reasonable $24.95.

Watching the movie is a delight because we see long-gone veterans like Ameche, Hume Cronyn, Jessica Tandy, Jack Gilford, and Maureen Stapleton in poignant roles as seniors.

David Saperstein’s novel provided the springboard for Tom Benedek’s adaptation which posits that 10 millennia ago, beings from distant Antarea came to Earth and formed an outpost on what is now considered the lost continent of Atlantis. As the cataclysm claimed the land, all but 20 members of the exploration team left the planet. Those who remained behind were shrouded in cocoons, waiting for the day they could be brought home.

When four of their brethren return, led by Brian Dennehy, they rent a home, collect the cocoons and charge a swimming pool with lifeforce to sustain the 20 survivors until the Antareans could bring them home.

Nearby, though, is a retirement home filled with people looking at the twilight of their lives, but some refuse to give up without a fight. Ameche, Cronyn, and Wilford Brimley sneak off and take a dip in the neighboring pool, rejuvenated by the lifeforce. They’re spry, energetic, even amorous and loving every minute of it. When Dennehy discovers them, he decides no harm, no foul and lets them continue to enjoy themselves.

The one who can never take joy from life, Gilford, also learns Dennehy’s secret but stays out of the water. He sees the bleakness of life and inevitability of death so refuses to take a dip or even bring his terminal wife, Herta Ware to heal. Instead, he lets his feelings fester until he blurts out the secret and suddenly everyone else in the home wants a chance at a second life, setting up the moving denouement.

Actions, we’re shown, have consequences and Howard lets things play out nicely. It’s a relatively simple story, using a science fiction setting to tell a story about people dealing with aging and the end of their years. Even this second chance has them reflecting in touching ways, with one another, their alien hosts, and their families. There are many wonderful performances here, capped by Ameche’s winning role, but everyone rises to the occasion, even younger folk like Steve Guttenberg, in one of his less obnoxious roles.

You can’t help but like a film such as this. The video transfer is fine if unexceptional as is the audio aided by the Dolby digital. Sadly, for a 25th anniversary edition, they merely replicated Howard’s commentary and five featurettes from the 1994 DVD release, totaling maybe 20 minutes all told. While many of the performers are gone, some sort of look back was in order and this is a missed opportunity.