Review: The Unclothed Man in the 35th Century AD 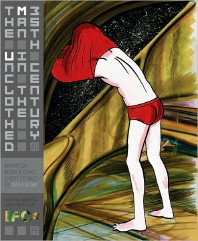 The Unclothed Man in the 35th Century A.D.

Dash Shaw seemed to appear out of nowhere with his massive 2008 graphic novel [[[Bottomless Belly Button]]] – but, of course, for those who were paying attention, Shaw had been an up-and-comer for several years before that, regularly contributing stories to the anthology [[[Mome]]] and active online. (This is the point where most reviewers would allow the reader to quietly assume that the reviewer – all-knowing, all-seeing – is one of the few who were paying attention, but that isn’t the case here. I first heard of Shaw when [[[Bottomless]]] arrived, just like most of you. Feel free to gloat in comments if you are one of the cognoscenti.)

As usual with explosions like that, the creator had other works floating around – either just starting (like Body World, Shaw’s online graphic novel which will be published as a book later this year), or those earlier short stories (from Mome and other places) – which could, and would, be picked up for print publication. And that sudden high profile also usually leads to new work – and it did for Shaw, who wrote, directed and co-animated a series of short movies for IFC.com called “The Unclothed Man in the 35th Century A.D.”

The book [[[The Unclothed Man in the 35th Century A.D]]]. is Shaw’s first book since Bottomless Belly Button, and contains one part to catch up with what Shaw was doing before Bottomless – eighty pages of short stories, mostly from Mome – and one part sidebar project: twenty-four pages of storyboards and animation art from the [[[Unclothed Man]]] films, including comics versions of parts of the story as well. The Unclothed Man material comes first, which makes sense, in that it’s the newer work, higher-profile, and gives the book its title, but also somewhat detrimental to the book, since it contains scraps from the creation of a different creative work in another medium. That first section of the book Unclothed Man is interesting primarily as a record of the animated series; it’s not a story in itself, but fragments of the telling of a story.

The bulk of the book, though, is Shaw’s shorter comics stories, starting with a recent, mature science-fictional cluster of stories, starting with the backwards-time family saga “[[[Look Forward, First Son of Terra Two]]]” and continuing through the multiple-plotline dystopian “Satellite CMYK” and on to the futuristic art-world “[[[The Galactic Funnels]]].” This is the creative heart of the book The Unclothed Man; the strongest and most clearly successful work here.

Next is one of Shaw’s most formally interesting stories, and one of his oldest to be reprinted here, “Cartooning Symbolia.” It starts off as an explanation of cartooning shorthand imagery – stink lines, “plewds of sweat,” and so on – but also tells the story of a pig-like cartoonist and his girlfriend, a relationship that ended because he relentlessly turned all of their moments into comics. This is heavy-handed and doesn’t entirely track, but it has the emotional force of a real lovers’ spat, and an energetically imaginative set of words to describe standard (and many new) emotional symbols of cartooning.

The rest of the book contains odder and less describable stories – one without a title about Hollywood writers and sound recordists that feels like a piece of something longer, a dreamed/imagined piece in bright blocks of color called “My Entire High School…Sinking Into the Sea!”, a nine-page comics adaptation of the TV show [[[Blind Date]]], and a set of storyboards for a film, called “The Uncanny Reproduction.” These feel more experimental, though it’s not clear when all of these were done. (Two are explicitly dated 2009, and so likely the newest work in the book; the other two have no dates. Once again I’ll note that, if I were King of Reprint Collections, it would be required by law to clearly note the first publication of everything included.)

Those readers who were hugely impressed by the scope and depth of Bottomless Belly Button will find the stories in Unclothed Man to be smaller and less impressive – though, paradoxically, the best stories in Unclothed are the science-fiction tales, which have more story-level invention and imagination than Bottomless – but that’s an unfair comparison to begin with, since short stories are not novels. Unclothed Man is an interesting, if quirky, collection of the work of a cartoonist who is still getting stronger and more confident. He’s done better work than this before, and will do better work again, but having the links in between is also useful and interesting.

Review queries may be sent to Andrew Wheeler at acwheele (at) optonline (dot) net.