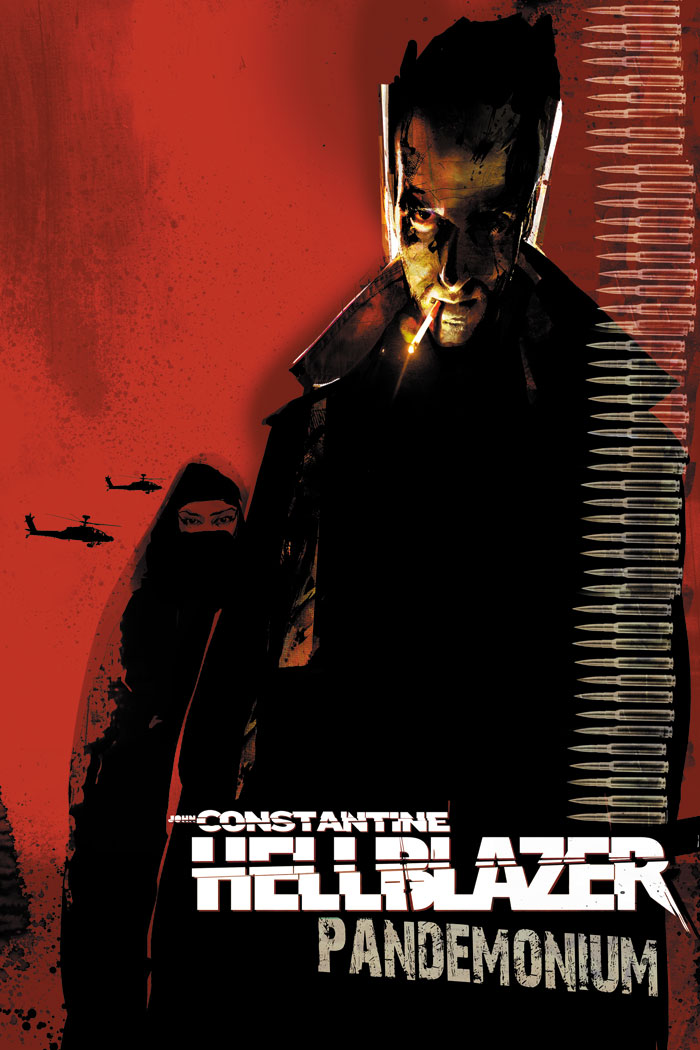 Although crated buy Alan Moore in the pages of [[[Swamp Thing]]], Jamie Delano was the first writer to tackle the punk rocker turned occultist on his own. He wrote the first year or so of the [[[Hellblazer]]] series which helped create the gravity that pulled several titles from the DC Universe into what is now Vertigo. To celebrate the character’s 25th anniversary, Delano has returned for a lengthy graphic novel, a long overdue achievement. With the rise of the format, Constantine lends himself to lengthier explorations of the darker corners of Earth and the black, fiery realms beyond our ken.

Delano slips easily back into writing the beloved bastard as he tricks the authorities, flips the underworld the bird, and once more risks his life to keep ancient evil at bay. This time, though, the British writer intertwines a Sumerian threat with the Iraqi conflict making this more topical than the usual stories (the last time Constantine dealt with current events, it was during Garth Ennis’ Irish issues).

With the wonderful artist Jock at his side, Delano begins the story in London where Constantine encounters a Muslim woman just before things go boom and he suddenly finds himself essentially blackmailed into helping the British military deal with the occult threat. With a fresh pack of Silk Cuts in his pocket, he goes to Hell, once more, and enters a high stakes poker game with a handful of demons in order to keep the ancient threat at bay.

Being a Hellblazer tale, you might imagine John Constantine has an ace up his sleeve and of course the ending keeps the world safe and allows him to have a final word or two for those who have tried to make him their pawn.  The page count allows more than the usual Constantine antics and commentary but what’s particularly nice is the evolving relationship with Aseera, the woman who caught his attention just before things began going downhill. Her beliefs and insights make for a nice counterpoint to John’s usual cynicism.

Delano and Jock don’t waste a panel and keep the story moving quite nicely. The review copy provided by Vertigo was in black and white but knowing the artist’s style, this will really sing in full color, more than justifying the price.

This is a strong, riveting tale and we can only hope the rest of Constantine’s anniversary celebration is equally as compelling.