Review: ‘Night at the Museum 2: Battle of the Smithsonian’ on Blu-ray 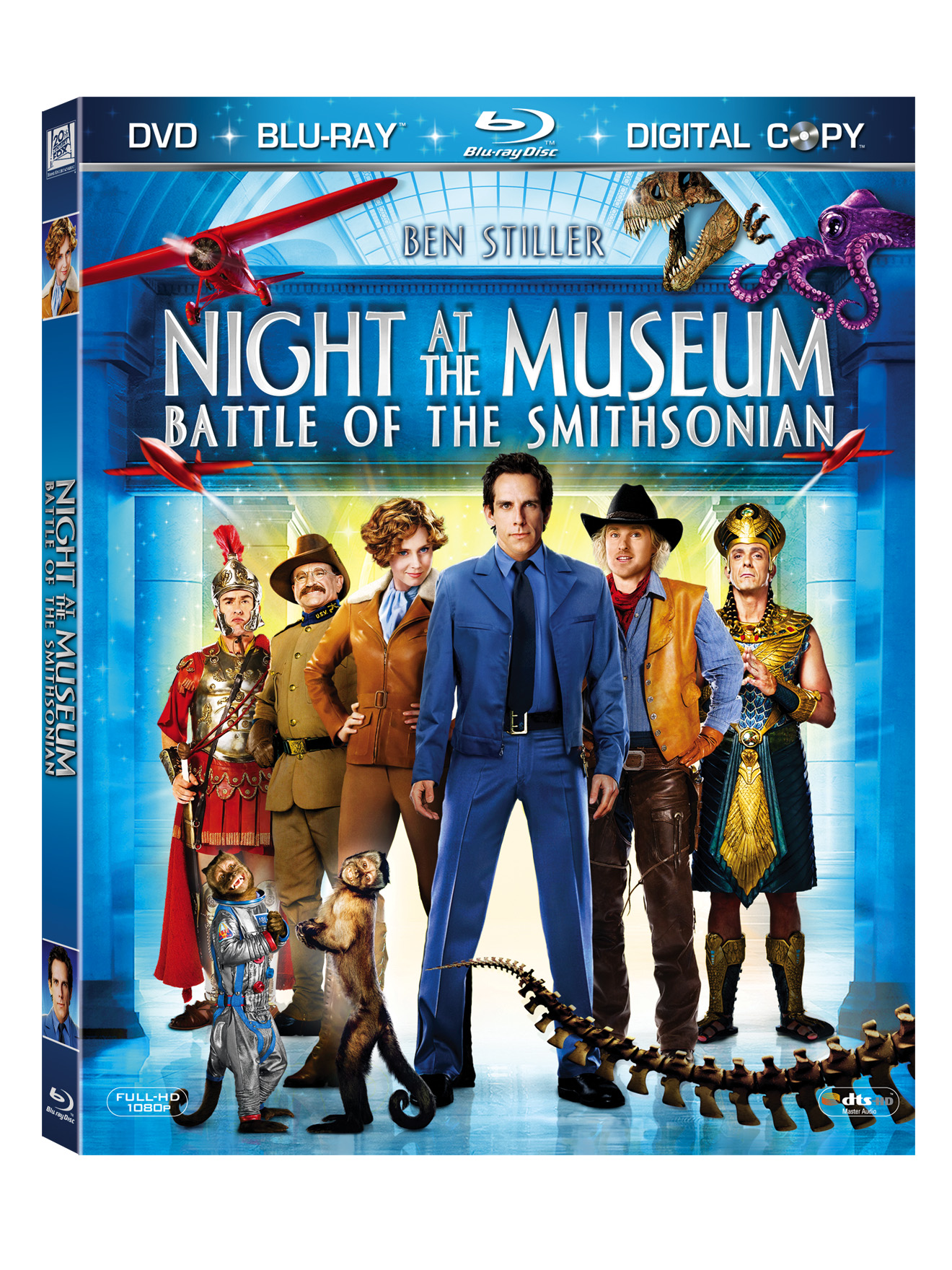 was a test to see if the sequel could be entertaining without knowing the ins and outs of the predecessor.

Thankfully, 20th Century-Fox sent over the Blu-ray disc, on sale this week, for review. The special edition has three discs: the film on Blu-ray with the usual assortment of extras, a disc with the film in Standard DVD and the now ubiquitous digital copy.

Overly, this is a mildly amusing film and does not make me miss the original in the slightest. The film tosses any sense of reality out the window from the get-go and expects you to be pulled along, not questioning the absurdities.

I did like how they recapped the first film via a conversation between “As Seen on TV” master Larry Daley and Mr. Pimp George Foreman. It was a lovely send up of those horrid infomercials. However, there’s no real connection between Larry giving up being a night watchman to becoming this successful-but-unfulfilled mogul so his dissatisfaction doesn’t ring true. Also, it was nice to see some semblance of a relationship between Larry and his son but then when he rushes to Washington, he seems to abandon the kid without a second thought despite no evidence of adult supervision. The kid seems there to help with the info dump and is then discarded, not even seen for the ending.

Instead, have to hurry to Washington since a chimp stole the magic Egyptian tablet that can bring the inanimate to life once the sun goes down. And somehow Kahmunrah, brother to last film’s Ahkmenrah turns up knowing all about the events that transpired. Hank Azaria gamely channels Boris Karloff to portray the power mad but not terribly bright Egyptian. He wants to open a portal to a nether-realm and take over a world he doesn’t understand.

The rest of the film is devoted to CGI-powered antics as Larry attempts to stop Kahmunrah as both call upon historic figures for help. By setting this in the Smithsonian, there’s a heavy American accent on the figures so we have Al Capone on one side and a plucky Amelia Earhart on the other. Interestingly, Amy Adams gives her Earhart a sense of verve that Hilary Swank never manages in the recently biopic bomb.

Amazingly, as the night progresses and we run from building to building and throughout the monuments, there are no other people. No homeless, college students, tourists, policemen…anyone. As a result, Abe Lincoln goes wandering from his monument to the museum and there’s not a single sighting or sense of panic.

The humor veers more to slapstick than the clever and the performances are uniform – everyone’s chewing the scenery as quickly as possible. The writing from Robert Ben Garant and Thomas Lennon should have been far sharper so the characters don’t spout anachronistic comments or play to the stereotypical information we know about the figures.

Everything that transpires is telegraphed and predictable right up to the ending that brings a sense of closure to Larry’s life.

Extras on the disc include commentaries from director Shawn Levy and one from the screenwriters and sometimes you think they made very different films. Then you have the 20 minute The Curators of Comedy: Behind-the-Scenes of Night at the Museum 2, a pretty funny Gag Reel, a dozen deleted scenes,Curators of Comedy: Behind The Scenes With Ben Stiller,Museum Scavenger Hunt Game, Cherub Bootcamp, Phinding Pharaoh With Hank Azaria, Monkey Mischief Featurettes, Historical Confessions: Famous Last Words, Secret Doors and Scientists,Cavemen Conversations: Survival of the Wittiest,Museum Magic: Entering The World of the Photograph, Director 201 With Shawn Levy, Gangster Levy, and finally the FOX Movie Channel Presents Featurettes.

In some ways, the plethora of extras inflates the importance of what is essentially a family comedy that makes no demands on any demographic. Still, the extras are the reason to have the film if you like any of the performers. Families can enjoy the film itself in any of the available formats.