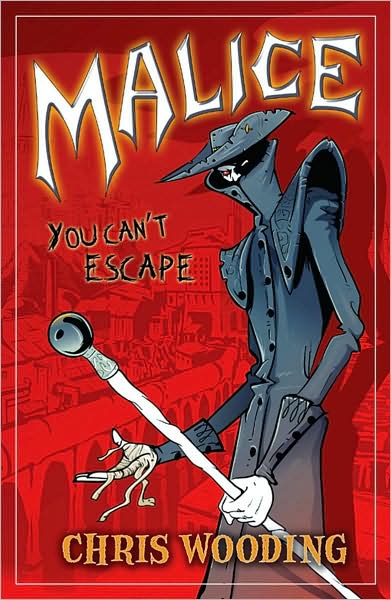 What if you could transport yourself to another world by following an incantation found in a comic book? Well, you might find the world a frightening and terrible place, just as children find in the new novel [[[Malice]]].

Chris Wooding, an accomplished young adult author, begins a new series this month with Malice, which mixes prose with comic book pages interspersed. Basically, children around the world have been reading this comic book, Malice, a cult title with each issue a seemingly disjointed series of eerie vignettes. What no one realizes is that if the children following the directions, they vanish and are transported to this other land. In the real world, they go missing and the few that return, have no recollection of where they have been but have been deeply affected by the experience.

Wooding’s novel focuses on the residents of the small town of Hathern, just as the young teen Luke vanishes. His friends, Seth and Kady, piece together he disappeared after reading the comic book and go on the hunt. Along the way, they find out who has been producing issues but necessarily why they are stealing children.

Only after Seth goes in search of Luke by entering the realm, does he begin to understand the malevolent forces at work, represented by Tall Jake, who has usurped control of this dark world. The world of Malice is a creepy place, patrolled by mechanical and non-human packs of beings, seeking the children who have wound up there. The children, meantime, fight for daily survival and swap stories –notably the rumors regarding the underground resistance force.

While Seth forges new alliances away from Earth, Kady begins to understand what’s happening but has too many questions, including trying to understand what the Queen of Cats wants with her. There’s a great revelation that takes the story in a different direction, keeping the pacing sharp.

Wooding, to his credit, creates credible, likeable characters and his vivid writing demonstrates the stark differences between England and Malice. His evocative writing creates a nice atmosphere and keeps you turning the pages, although as you near the end, it becomes clear this is just the opening chapter. A sequel, [[[Havoc]]], is announced on the final pages.

If only his words were matched by Dan Chernett’s illustrations. The book would have benefitted greatly by using an accomplished comic artist as opposed to a professional illustrator unaccustomed to working in the medium. As a result, his pages are poorly constructed, the storytelling is weak and the use of shadow and scratchy lines robs the comic sections of their power. Had the masters of macabre from Bernie Wrightson to Ben Templesmith been brought in, this would have complemented the prose quite nicely. A real missed opportunity.

The book is recommended for readers 12 and up and that sounds about right given the characters, pacing and description contained within.