The Marvel Encyclopedia, Updated and Expanded 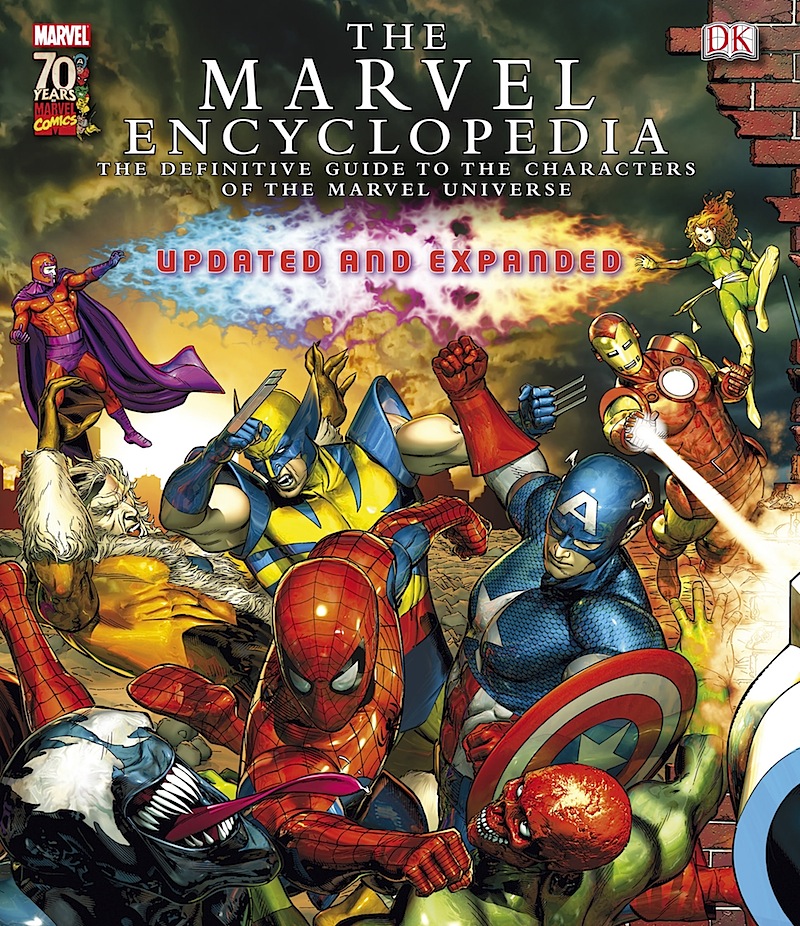 These days, you can’t follow Marvel’s or DC’s continuities without a scorecard and thankfully more than a few reference sources have arrived to help out. The latest is DK’s 70th Anniversary contribution, a revised version of 2006’s [[[The Marvel Encyclopedia]]]. What a difference three years can make to continuity.

The key difference in the editions is the addition of pages, bringing the total to a hefty 400 pages. DK did everyone a favor and kept the cover price consistent at $40. Frank Cho’s cover is replaced with a Brandon Peterson piece that attempts to reflect the full history of the Marvel heroes. Matt Forbeck deftly took the original text, written by a quintet of experts such as Tom DeFalco and Peter Sanderson, and brought dozens of entries up to date in addition to adding entirely new ones where warranted. The crack design team replaced only a handful of images to existing entries but where they expanded or added new entries, the art nicely reflects the subject matter.

Forbeck’s updates take readers into the Dark Reign era but merely its beginnings so many of the events in the second half of 2009 are not reflected in the text. It might have been better to cut things off after Secret Invasion. As it is, some key events — Aunt May’s wedding to J. Jonah Jameson’s father, Brother Voodoo not listed as next sorcerer supreme, Firestar’s cancer — are missing. I also think Emma Frost, Nick Fury, Rick Jones and Speedball’s current situations get short shrift. And while many new entries are welcome, some stand out characters are missing such as Jameson’s father, Peter Parker’s new supporting cast, Ezekiel, Valeria Richards and each member of The Twelve. Also, the war and western characters are barely represented which is a shame. Similarly, only a few of the 2099 and M2 characters are here.

New spreads covering the significant modern day events – Civil War, Secret Invasion, and Annihilation – make the book feel nicely up to date but then older events such as the Kree/Skrull War and Secret Wars now feel overlooked. It would have been nice if the Fifty- State Initiative spread actually listed which heroes covered which states or which humans were replaced by Skrulls in the SI spread but these are minor nits. A larger nit is that a few characters receive spreads showing Key Moments and while I agree that House of M is major, I refuse to accept Spider-Man vs. Anti-Venom a key moment. Fortunately, the book ends with a spread on the more prominent parallel universes which will help the less devout reader.

Production demands meant that many entries had artwork reduced to fit in new entries but overall the pages do not feel overly packed and are easy to read.  From what I can tell, just a few characters were dropped in favor of more current figures so say bye-bye to Marlo Chandler, Hornet, Libra, N’Garai, Candy Southern, and, Tana Nile.

Of the art chosen, I have very few quibbles over choices made but would have preferred a Gene Colan Dracula and would have updated the mis-proportioned Don Heck illo for Pepper Potts.

Clearly, this is a much neater and more effective updating than DK’s second edition of [[[The DC Encyclopedia]]] (which I was a coauthor on). You won’t want to miss picking up this fact-filled tome.