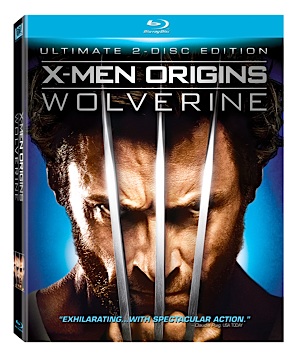 kicked off the summer season and much of the film review that follows originally appeared on my blog. This past week, 20th Century Fox Home Entertainment released the movie on DVD and Blu-ray, both containing a digital copy as has become standard these days. Since his introduction in 1974 through 2000, people were fascinated by Wolverine. He was a feral, edgy character at a time few other costumed crime fighters were. There was a tragic element to him since he could not recall his past. Through the years, writers teased us with bits and pieces about him, letting us know he was long-lived and had gotten around. But, just where did this Canadian come from?

After the success of [[[X-Men]]] in 2000, it became apparent there would be other mutant movies and the issue of Logan’s origin was no doubt going to be addressed. In 2001, Bill Jemas said the time had come to tell the origin. Better Marvel control the origin elements rather than some unfamiliar screenwriter so in many ways, his miniseries, [[[Origin]]], was a pre-emptive strike. And maybe it was just time.

The Paul Jenkins version beat out several others and became the one Andy Kubert drew in his gorgeous style. This is now the origin, like it or not, that every licensee is obligated to follow. All of this sets the stage for X-Men Origins: Wolverine

, a solo project that invited movie audiences to see where Logan came from and how he had his skeleton covered in adamantium.

Good thing there was a roadmap to follow because the changes from the comic showed that in other hands, telling his origin could be disastrous. Far too little is spent setting up James Howlett’s life in Canada before his claws first popped out. The family dynamic is given such short shrift that it felt sketched rather than written. I was particularly bothered by the decision to make Howlett and Victor Creed brothers, an unnecessary and overused Hollywood trope.  Yes, Sabretooth is Wolverine’s great comic book nemesis but he had nothing to do with the origins and shoe-horning him here doesn’t fit.

We know they’re both mutants, both feral in nature, something not well explored by the script. The title sequence successfully shows us how they stayed together, reached adulthood and seemingly stopped aging, but continued to sate their natures by going from war to war. Why they left Canada for America is unexplained nor are we properly shown how they began drifting apart and why Victor relished fighting while James had more of a conscience.  Had the movie taken the opening montage and really delved into his origin, we would have had a more dramatic character-driven origin rather than this testosterone-fueled film overstuffed with extraneous mutants.

James and Victor wound up as part of mutant military brigade under the command of William Stryker. We get to see some mostly familiar mutants including Wade Wilson, whose jabbering was perfect. Anyway, James reached his limit with the squad’s brutality and walked on them, and his brother. In the intervening six years, he found a quiet job as a lumberjack along with the love of a good woman, Kayla Silverfox, until his past came back to haunt him.

Stryker has manipulated James so he agrees to undergo the transformation into a living weapon. A military reason for the Weapon X program as opposed to the evil scientific cabal is another Hollywood cliché that was irritating and Stryker as the mastermind never seemed smart enough or motivated enough to be a real threat.

Bonded to adamantium, James Howlett has now rejected his past, adopting the name Logan and the codename Wolverine (the animal name came from that other Hollywood touch, a story told by his lover in the scene before she is killed). Now seeking Creed, who killed Kayla under Stryker’s command, the second half of the film becomes a revenge tale. 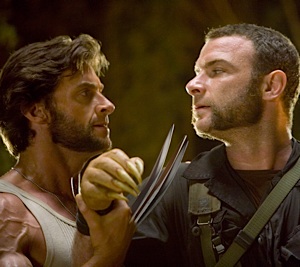 The trail to finding Creed reveals the existence of an island where mutants were being rounded up (and with Dominic Monaghan in the cast, I kept thinking of some other island). Apparently, the only person who knows the location is Remy LeBeau, adding yet another unnecessary element to the tale so the Wolverine origin is rapidly being becoming a team story.

Once he finds the island, he finds Stryker and Creed and several surprises I won’t spoil for those still planning on seeing it. Additional alterations to the origin tale, including how Wilson became Deadpool (although not named), also cluttered the story. In the end, as seen in the trailers, Wolverine cuts the captives free and an army of mutants, mostly familiar ones, run free. And again, for no obvious reason, Kayla is now a sibling with Emma Frost, a plot point that’s introduced and dispatched one wonders why they bothered linking them?

As for the memory problems that plague him, the rationale has to be the single weakest moment in the entire story.

The movie runs 1:47 and it moves. The problem is, it’s moving fast enough that these irritating bits occur only during the final credits, as we await that one final bit at the very end because we knew there was something. Anyway, it was entertaining and Hugh Jackman heads a well cast ensemble so it was easy to sit through the story.  The fights are nifty, things blow up real well, and we now see how Wolverine was set on the path that led him to Professor Xavier’s School for Gifted Youngsters in X-Men. But for a movie about Wolverine’s origin, we were also constantly distracted with extraneous mutants, stereotypical evil military people, good people arriving with targets on their chests from the moment they’re introduced and other bits that rob the movie of being special.

The extras are a nice mixed bag of stuff.

You have your choice of audio commentaries with director Gavin Hood going solo on one and producers Lauren Shuler Donner and Ralph Winter on the second; underscoring the rumors that Hood’s efforts were seen as disappointing to the production team. You learns some interesting factoids regarding movie production but nothing specific to Wolvie and the X-comics.

Blu-ray fans can find as supplements to the film during a viewing, including X-Connect where Donner and Hood point out where this film actually meets the previous three X-Men films; The Director’s Chair features Hood holds forth once more in exclusive to the disc commentary differing from the audio found in both formats and directly addressing the changes that took this film away from its comic book roots;  and Hood presides over Pre-Visualizing Wolverine which is another look at the production process using 3D animatics; and finally the so-so X-Facts. Hood’s goals
are solid ones but the execution never achieves those ideals.

Aficionados will enjoy the Live Lookup option which allows you to get additional info on any actor tagged on screen and brings up their IMDB page. You can do this by chapter or for the film as a whole.

As one expects, you receive about ten minutes’ worth of Deleted and Alternate Scenes, emphasizing the latter and here’s where you can see the ending you missed by watching the other one in the theaters. Those who got the Japan ending know that it will directly lead into the anticipated sequel.

The Roots of Wolverine: A Conversation with Stan Lee and Len Wein really should have featured Roy Thomas, Len, and Herb Trimpe. Stan was pretty much gone by the time Wolvie was introduced whereas it was Roy who suggested the name and Herb who drew the introductory tale. Len is an engaging raconteur and it’s nice to see him get credit unlike other writers and artists who were missed on other films.

Wolverine Unleashed: The Complete Origins is about 12 minutes of looking at the various concepts bandied about in the course of developing the feature film. Once the film was in pre-production, you learn how Jackman trained to look so lean and mean.

The Weapon X: Mutant Files is nearly an hour long collection of shorts that takes the above and expands it with more of the cast chiming in. Anyone interested in the stars or how films are made today will glean some useful information but overall, this just feels long. Fortunately, they are sub-divided so you can spread these out over viewing or just watch the ones that interest you the most.

Of course there’s a detailed look at the signature helicopter scene and that’s short and punchy.

Finally, there’s the Fox Movie Channel Presents – World Premiere, a six minute look, should you care who wore what at the Tempe, Arizona event.

If you missed the film, by all means see this. If you’re a diehard Jackman or Wolverine fan, it’s a must have. For everyone else, don’t expect brilliance but a fast-paced popcorn film.