Review: ‘I Sell the Dead’ 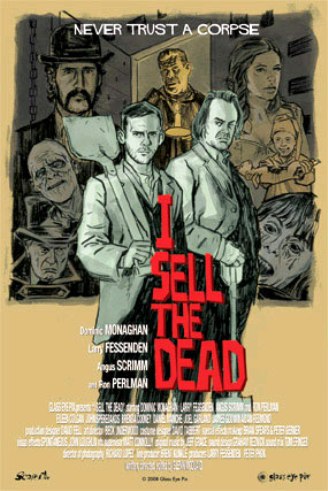 Are you looking to round out your Summer with a campy “horror” movie? Look no further than [[[I Sell the Dead]]]. This amusing film, written and directed by Glenn McQuaid, follows the recollections of a young grave robber named Arthur Blake (Dominic Monaghan) on the eve of his execution.

Set in 18th century England (some of our group thought Ireland), the general campy tone of the movie is hinted to early on when Father Duffy (Ron Perlman) is on his way to hear Blake’s confessions and passes what appears to be the skeletal remains of a chihuahua in the dungeon. In recounting how he became a grave robber, we are treated to humorous flashbacks of how Blake became a grave robber and, later, a “ghoul” – one who acquired and sells the undead. We soon discover that Blake and his grave robbing partner, Willie Grimes (Larry Fessenden) are up against a rival gang of brutal ghouls who are happy to use any means necessary to get their hands on the undead.

The film is chock-full of vibrant (and often drunk) characters. It is also well-stocked with monsters and over-abundant artificial fog somewhat reminiscent of classic campy horror films. I Sell the Dead does not fail to deliver the laughs they seem to be aiming for. The film also uses a very stylized method for changing scenes, wherein the end of a scene goes still and is then inked over to have the look of a scene from an old pulp comic. If you are looking for a modern, action-packed horror movie with a lot of shock and gore, this is not the film for you. Fans of Dominic Monaghan will enjoy getting to see him on screen again, and his comic timing is excellent as always. Those who prefer classic horror films or who want a break from the ordinary will find I Sell the Dead clever and amusing. If you are planning to see a fun and different flick with a group of friends, check this one out!