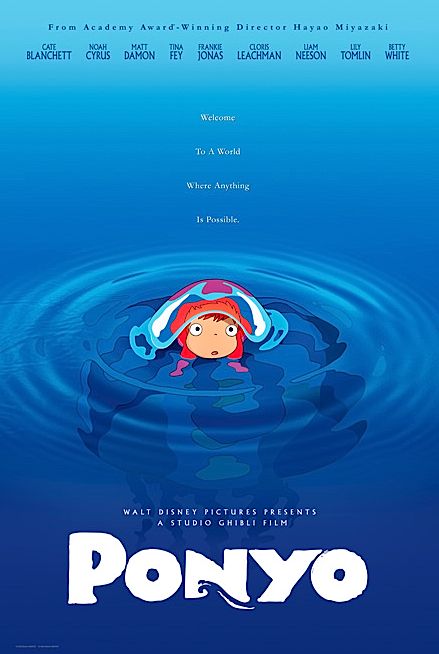 In advance of its August 14 limited release, Hayao
Miyazaki’s latest film [[[Ponyo]]] made its East Coast debut at Symphony Space in Manhattan on Sunday, August 9, to the great delight
of those of us who have been waiting too long for a Miyazaki film, thanks to
the legal issues surrounding [[[Tales From Earthsea]]]. Free posters were given out
to several people waiting on line. and plush Ponyos were tossed into the
audience, one of which was claimed by one of my companions in an impressive
high catch.

The title character, Ponyo, is apparently the oldest and
most powerful of the many girl-faced goldfish daughters of the sea goddess Gran
Mamare and Fujimoto, a human-hating, hollow-cheeked wizard who lives
underwater. Curiosity brings Ponyo to the surface and gets her stuck inside a
jar; a 5-year-old boy named Sosuke rescues her, dumps her in a pail, and feeds
her a ham slice. These deeds are apparently enough to win Ponyo’s heart; she uses
some of her father’s magical elixirs to turn herself adorably human and show up
on Sosuke’s doorstep. Unfortunately, her act upsets a natural balance, putting
most of Sosuke’s town underwater and threatening further damage unless Ponyo
declares his love for her. Yes, you got that right. He’s five, and he’s got to
promise to love her always—whether as a sister or as a future bride, it’s not entirely
clear. How many of us have declared their eternal devotion to someone we met at
the age of five? How many of us are even still friends with someone we met at
age five? (I’m still friends with one woman I met at age seven, and that’s
really pretty impressive, I think.)

As other reviewers have mentioned, Ponyo is essentially a
riff on [[[The Little Mermaid]]], but without the singing of the Disney movie or
the walking-on-knives and rigidly Lutheran moralizing of the original story. Frankly,
some appropriately directed moralizing might have been what this story needs (over and above
the usual love nature, hate pollution message that’s present in all Miyazaki
films).

Disney produced the English-language version of Ponyo;
these are the same people who were so disturbed that the 13-year-old witch
protagonist of [[[Kiki’s Delivery Service]]] was drinking coffee, they awkwardly wrote the
English dub to indicate that she was drinking hot chocolate instead. I wouldn’t be
surprised to hear that execs had considerably more ethical qualms about this
film, but given the international box office and prestige that Miyazaki gained
in previous efforts, decided to stifle them.

I know that mores differ from culture to culture, which is
why no one cavils at the father bathing naked with his two young daughters in
“[[[My Neighbor Totoro]]].” It’s clearly an innocent, loving scene. I know, too, that Americans have burnished the phenomenon of “helicopter parenting” to the highest of glosses. However, there are a number of incidents in “Ponyo” that I had a real difficulty getting past. Sosuke’s dad is a ship’s captain, and his frequent absences mean that Sosuke’s volatile mother is practically a single mother, and she frankly doesn’t seem up to the task. Her breakneck driving while her young son is not wearing a seatbelt (forget about sitting in a child seat in the back) was seriously disturbing, and that’s before she decides to speed through a flooded-out section of the road blocked off by safety personnel. Then there’s her decision to leave these two 5-year-old children, Sosuke and Ponyo, alone at night
so that she can offer help to the nursing home where she works, even though
other staff members already stated their decision to remain behind. Did I
mention that Sosuke has access to matches? In addition, all of the other adults
in the town seem to have no problem with Sosuke and Ponyo wandering around
unsupervised, even in the middle of an epic natural disaster. Fantasy films
(well, nearly all films) require a certain suspension of disbelief, but my
strong impulse on several occasions to call Japan’s equivalent of CPS made
maintaining that suspension really, really tough.

Despite all that, there were several amusing and lovely
moments in the film. Ponyo’s joyful innocence is incredibly appealing, particularly
in a marvelous scene where her chubby, bloomer-clad legs race across the tops of
the waves flooding the town. Naturally, the art is absolutely sumptuous.
Miyazaki eschews his perennial obsession with the air for an equally obsessive
focus underwater, populating a lush sea world with all manner of lovingly
detailed swimming creatures, as well as the wizard Fujimoto’s flipper-propelled
boat. (Two other Miyazaki motifs are also missing from the film: there are no
cats and the ham is the only reference to pig.)

Disney does its usual high-budget casting for the English dub,
with Liam Neeson as Fujimoto and Cate Blanchett as the sea goddess (typical
roles for both); Tina Fey is Lisa, Matt Damon is Sosuke’s dad Koichi, and Frankie Jonas of the Jonas Brothers is
Sosuke. Betty White, Cloris Leachman, and Lily Tomlin voice the elderly ladies
at the nursing home.