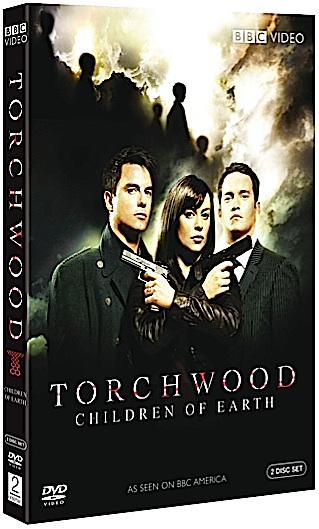 for just a five episode third season. Then, word began leaking out that [[[Children of Earth]]] would be a five-part event, airing on consecutive nights. Turns out, it was following an increasingly popular television event format for the budget-conscious British networks so we were being asked to trust them.

Now, a mere four days after the event aired on BBC America in the States, BBC Video is releasing the story on DVD. This is one that will be worth seeing more than once.

The first two seasons of the [[[Doctor Who]]] spin-off were uneven affairs, as it dealt with darker and more adult themes but also couldn’t find a consistent tone. With the latter episodes of the second season, it seemed to be hitting its stride as they dealt with the death of one member of the team and then losing a second.

[[[Children of Earth]]] opens some months later and while the
immediate sting of losing two close allies has worn off, the team has
yet to be repopulated despite their mission begging for a full force.
As we pick up, there’s actually discussion over the need for a doctor
and they identify Rupesh Patanjali (Rik Makarem) as a candidate but
we’re all somewhat surprised to learn he’s a government mole, designed
to infiltrate Torchwood for reasons unknown.

We never find out because all of a sudden, every child on the planet
is controlled by an alien presence and they speak in unison, warning
that the aliens, dubbed the 456, are returning. Every time they freeze
and begin to communicate, it’s eerie and frightening, setting an
ominous tone. And that’s when the British government should be turning
to Torchwood to be dealing with extraterrestrial menaces but instead, a
crack Black Ops team led by Johnson (Liz May Brice) is out to
exterminate the trio of remaining agents. In a clever way, they implant
a bomb in Captain Jack Harkness (John Barrowman) and in an even
cleverer way the team discovers it just before their Hub in Cardiff is
blown up.

Over the course of the five episodes, the characters are beaten down
time and again, but being Torchwood, they dust themselves off and never
give up. Given the smaller core cast, it was nice to see Rhys (Kai
Owen) get more to and be integral to the story. There are nice moments
between the characters as well as some satisfying moments when the
indefatigable team turns the tables on their attackers.

But the spine of this story is children. Yes, all of the children on
Earth are threatened but there’s new life as Gwen (Eve Myles) discovers
she’s pregnant and we learn that Jack has been somewhat distanced from
his daughter and grandson. We also nicely get to focus on a handful of
the children affected by getting glimpses if Ianto’s niece and nephew
along with the children of John Frobisher (Peter Capaldi), the
bureaucrat handed the unenviable task of negotiating with the aliens
once a representative arrives on Earth. There are lovely moments here,
especially when one has to be sacrificed and the repercussions the act
will have.

The notion that Jack has children was worth exploring, especially
when it became clear he would outlive them all and that caused
incredible strains. It’s interesting to learn his daughter’s mother was
also Torchwood and actually died of natural causes, noted as a rarity
for the team. Ianto (Gareth David-Lloyd) also comes to realization that
his relationship with Jack is ephemeral at best and colors his actions.

Since many may not have seen the entire miniseries as yet, I won’t
discuss all the plot points but the benefit of producing a five-part
story is that scripters Russell T. Davies, John Fay, and James Moran
have time to develop the themes and the character interrelationships.
There are grace notes throughout and everyone of the regulars gets
something to do along with the guest cast, which also includes Cush
Jumbo as newcomer Lois Habiba, who is exactly where Gwen was in the
very first episode. There’s time for action and time for tears, time
for twists and time for the familiar bits of business.

By
shooting this as, essentially a five-hour feature film, the set
decorators, production designers and special effects people have a
chance to really delve into their work and on screen, the production
values have that feature quality with a sustained mood from director
Euros Lyn. The end result is a dark, occasionally frightening story
that lives up to the premise of Torchwood, raising the stakes in a new
way.

The quintet of episodes is supported with a 31 minute [[[Torchwood Declassified]]],
which you should see after the miniseries, not before. The documentary
delves into the making of and shines the spotlight on every aspect of
the production including the nods towards the guest cast and the supple
voice of 456, Simon Poland. One aspect I wish they addressed was when
blowing up the Hub. They also destroyed all the technology they
archived, preserved, and used as needed. And what of secrets that might
have survived? And where are the creatures locked up?

You
can’t ask for a better event for the series and it’s nice to know this
is not the end of the team, decimated and demoralized as they are. At
Comic-Con, it was pretty much confirmed there will be more in some way, shape, or form.