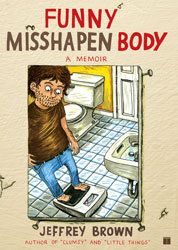 One of the really interesting aspects about the growth in graphic novels is that more and more people are using the form for memoirs and autobiographical works. Will Eisner explored growing up in the tenements, kicking things off, and since then we have had utterly fascinating works that detail romance, aging, life on the streets and the like.

Jeffrey Brown has been mining his experience in numerous works and has made a name for himself with his books, beginning with [[[Clumsy]]], which has been acclaimed since its release in 2005 and has remained in print since Top Shelf acquired rights in 2007. Brown has done short and long works, all with observations on life and work and art. His work has won him numerous accolades and he has even gone on to direct a music video for Death Cab For Cutie.

hit my desk, I knew nothing about Brown. As a result, the book, now available from Touchstone Books, was a window into a new world and one I was pleased to visit. Brown’s growth from doodler to artist no doubt mirrors the journey many working artists took, but watching him lurch from school to work to art was interesting, since they all wound up informing his work.

Brown’s style is a little on the crude side, but he keeps his page design fairly consistent, mostly the six panel grid. He doesn’t try and confuse with pyrotechnics but fills every panel with detail. His simple style manages to convey time, place, and emotion so one is never confused. The lettering could be cleaner and better space for legibility, but there’s an earnest feeling to the drawings, letting us watch him try and fail, finding his way. The story is told in chapters and in a non-chronological way but by the time you finish the 308 pages, you can put the pieces together and see what he has accomplished.

The adversity he faced included his own slacker ways through college, fueled by disinterested and clueless art professors. His diagnosis and handling of Crohn’s Disease is largely confined to one chapter but clearly affected everything that followed. Similarly, we get glimpses at friendships and lovers, all of which were influential but the book keeps returning to Brown’s herky-jerky path towards working as a professional artist. His trial and errors are exposed along with the tremendous support he received from artist Chris Ware.

There are moments of humor and times you shake your head at how stupid he was for wasting so much time getting drunk, but all in all, you find yourself cheering Brown as he found acceptance for his work, and finally a point of view to his artwork that culminates with the arrival of Clumsy from the printer.

For those who aspire to working in the field, this is a good travel guide and for those of us who like to see how others live and learn, this is a good picture of life in the 1990s. The engaging book can turn most into fans of Brown’s work.