Review: ‘The Best of Simon and Kirby’ 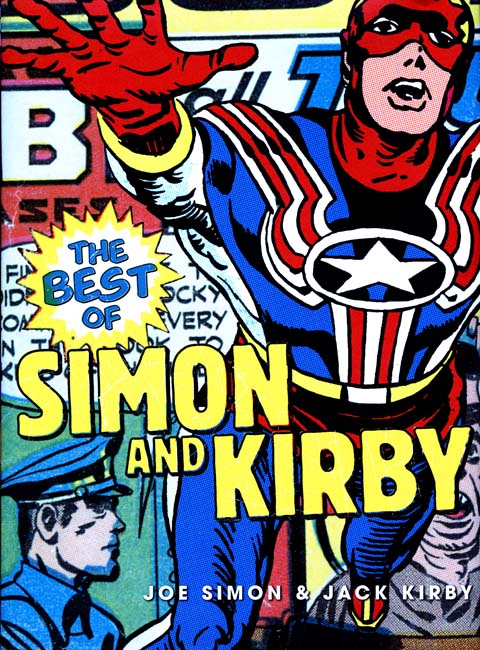 Joe Simon and Jack Kirby have been the gold standard for partnerships in the comic book field. Their work ethic, their creations, and their longevity speak volumes about the duo and speaking of volumes, they are likely the only ones to get DC and Marvel to allow stories from their archives to share two covers,

Titan Books has just released the first volume in a six book set celebrating the collected works from Simon & Kirby. The Best of Simon and Kirby

(240 pages, $39.95) is a delightful sampler from the many genres they mastered. Forthcoming will be Joe Simon: The Man Behind the Comics, a more comprehensive autobiography than his previous effort, followed by five volumes focusing on super-heroes (two books), romance, crime, and horror.

The oversized book (9.25” x 12.5”) allows the artwork to breathe, showing off the vitality found in every panel. Harry Mendryk has lovingly restored each page, a project he did out of love for the material and has since turned it into a profession.  Between Mendryk’s work and the color restoration, each story has that Golden Age feel with the larger dot patterns and somewhat closed up line work.

As selected by project editor Steve Saffel, the stories in this book cover the genres – Heroes, Science Fiction, War, Romance, Crime, Western, Horror, and Humor. Each chapter has the stage set by — who else — Mark Evanier, who quickly recaps how the pair’s career evolved, and how they moved from company to company, genre to genre.

We get a sampling of three or so stories per genre plus some covers and it’s just enough to whet your appetite.  As one would expect, the adventure heroes shine above all else. The energy in their work is clear, the figures bursting from the panels. We can see Sandman, [[[Captain America]]], the Vision, Fighting American, and the Fly in derring-do.

The other stories, though, are the revelations as we see that no figure is at rest. Each panel is composed with figures in motion as if standing still was against some Simon & Kirby law. Page composition was fluid and inventive as the pair experimented with keeping the reader’s eye in motion, much like their characters.

Things moved, and they had to since the stories rarely ran over 9-10 pages each. We meet the characters, get into the situation, and before you know it, the story ends. Characterization, if there was any, was all surface and the dialogue was perhaps the weakest aspect of the collaboration. Both were strong draftsmen and inventive storytellers, but all the dialogue sounded somewhat the same.

As creators of the romance comic field, the two told confessionals, as they got in touch with the feminine sides (if that was possible). One such tale, “Weddin’ at Red Rock!” mixed romance with the old west with a nice surprise ending. And it was nice to see that while it was not Kirby’s forte, he could draw an attractive woman when pressed.

About the one genre where Simon excelled and Kirby faltered was the humor field. While Simon created and executed Sick for years, the stories seen here are pale imitations of Mad, with nothing new added to the mix.

If you only know the legendary Simon & Kirby team for their work on Cap or the Newsboy Legion, this book is a must-read.  You gain an entirely new appreciation for their efforts and Titan is to be commended for reminding us about the field’s pioneers.