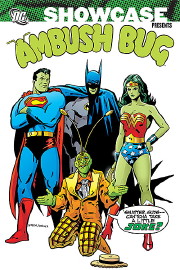 Plot & Pencils by Keith Giffen, Script by Robert Loren Fleming, Inks by Bob Oksner (for most of the stories)
DC Comics, March 2009, $16.99

We all have to look back at the comics of our youth once in a while. It’s not always a pleasant experience, particularly when we’re reminded of what no-taste cretins we once were. But, once in a while, it’s possible to look back and discover that our taste wasn’t that bad, that something we remember as funny was actually clever and inventive as well. Even then, though, we might have to wade in pretty far before we get to the good stuff.

Ambush Bug started off as a random villain in a minor issue of a minor DC comic in late 1982 – DC Comics Presents #52, at that time the [[[Superman]]] team-up book – written by Paul Kupperberg, though the Bug was created by penciller Keith Giffen. He was there purely as an additional complication, as the A story in that issue saw a rampaging Negative Woman (from the then-new incarnation of the Doom Patrol) trashing Metropolis while Supes and her teammates tried to stop her. (And that issue is very of its time, with acres and acres of tedious explanatory dialogue like “The name’s Joshua Clay – Tempest to you, Superman. The lady calls herself Arani, or Celsius, take your pick! Put us together an’ you get the Doom Patrol” and similar decaying-Silver-Age tediousness.)

The Bug came back to DC Comics Presents slightly wackier, but still vaguely villainous, seven issues later, with Giffen taking over plotting as well and getting Paul Levitz to write an ostensible Superman-Legion of Super-Heroes team-up. It turned into a chase-the-wacky-villain around plot, something like a minor ‘50s Joker story. Kupperberg grabbed the Bug another six months later and made him wackier still for an issue of [[[Supergirl]]].

And then Giffen took the Bug back for good, putting him in three short stories for [[[Action Comics]]], where the core Bug team – Giffen on plots and pencils, Robert Loren Fleming providing script, and Bob Oksner on inks – came together. Giffen’s panels shoved into each other, eliminating gutters most of the time, and his Munoz-influenced period, all big noses, tight close-ups and odd angles, began – all of which gave the Bug’s stories a dark, cluttered, deeply nonheroic look. Oksner chipped in by dropped pots on ink on every page to fill Giffen’s blacks. And Fleming brought a light touch to the prose that made the stories funny and not just amusing.

So there were three eight-page stories in Action – possibly the best Bug stories, since they were short enough to both be fully anarchic and not wear out their welcome – a full-length team-up with Superman back in DC Comics Presents, since the Bug was a hero now – and then his own four-issue miniseries in mid-1985. A special and a sequel six-issue series followed through the end of 1986. And then…nothing for a couple of years. The Giffen/Fleming team did a short story for the retro series Secret Origins in 1990, and then got another special in 1992, but the Bug no longer fit into the DC universe the way he had in the beginning.

Looking back, Ambush Bug is very clearly a pre-Crisis character, one of the last flourishings of the anything-goes, multi-universal DC Universe of the Silver Age. He knew he was in a comic book, but that wasn’t a Grant Morrisonian metafictional trick – it was the wink from a vaudeville comic who sees the hook coming and ducks under it. The first miniseries revels in the silly continuity of the old DC Multiverse, dragging out one bizarre character after another as if to give the Bug a pedigree and show that he’s not nearly as silly as he could be.

By the second miniseries, the fact that Giffen and Fleming couldn’t get permission to use any major characters was becoming a running joke. DC had gotten more buttoned up and tied down, and there was less room for a character like the Bug – and editors and writers had control of characters, so John Byrne could prevent Superman, the Bug’s perfect foil, from ever showing up again. The plots – where you could find them amid the chaos – got darker and darker, with the Bug becoming a punching bag, both for the other characters and for the universe. The stories were still funny, but the humor got darker and the Bug kept on the run (or dead) more often than not.

The final special backs off the darkness a bit, blending in a surreal plot about an immortal Julie Schwartz (the original editor of the Ambush Bug stories and by that point semi-retired to be DC’s Goodwill Ambassador) and featuring some nicely pointed satire about the Image creators. (Particularly pointed because Giffen scripted a few pages himself – badly, playing up his image as a non-scripting artist – in emulation of Todd McFarlane and Rob Liefeld.)

Once Fleming came on board, the Bug was consistently funny and inventive, as Giffen plotted bizarre transitions and scenes knowing Fleming would be able to keep up with him. Some of those stories are better than others – the longer issues, like the first special, have sections that feel stretched – but they’re all of a piece. The secondary characters – like Quantis, a giant koala, and Argh! Yle!!, the Dr. Doom-ish intelligent sock – are wonderfully nutty, and show Ambush Bug’s debt to the great funny series of the decade before, Howard the Duck.

The Bug might have had a longer career, or a more happy one, if the Crisis had happened later, or if Giffen had thought him up a few years earlier. But it didn’t, and he didn’t, and so this is what we have of the Bug (besides a current mini-series that’s less successful, and still-unfinished as I write this). Humor is hard to sustain; I doubt an ongoing [[[Ambush Bug]]] series would ever have been any good. A series of back-ups would have been ideal – but the world of comics was moving decidedly away from back-ups in 1986. Still, there are nearly five hundred pages of comics here, and about four hundred of them are wonderfully funny and quirky; that’s better than can be said about a lot of series.

As usual with the [[[Showcase Presents]]] volumes, the stories are printed without frills: in black and white on mediocre paper. That detracts from a lot of the jokes – particularly those on Tony Tollin, the original colorist – but it also gives Ambush Bug an odd legitimacy – it now looks so much like the standard reprints of older comics, that it seems to slip in as a very late goofy Silver Age book, the spiritual cousin of Inferior Five or Super-Turtle or Bat-Mite. And in this age of [[[Super-Dickery]]] and [[[What Were They Thinking]]]?!, remember that Ambush Bug was making fun of the DC Multiverse first, from the inside, twenty-five years ago.

Andrew Wheeler has been a publishing professional for nearly twenty years, with a long stint as a Senior Editor at the Science Fiction Book Club and a current position at John Wiley & Sons. He’s been reading comics for longer than he cares to mention, and maintains a personal, mostly book-oriented blog at antickmusings.b
logspot.com.