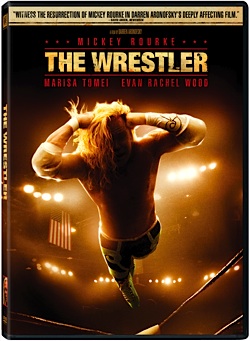 In our world, there are costumed champions fighting the good fight against costumed evil doers, done in public and for our entertainment. We call them professional wrestlers but given their names, attire, and storylines, they truly are comic books brought to life.  Unlike comic heroes, though, these players age and fade away, to be replaced by a new generation with new names, not retreads.

Frank Miller’s [[[The Dark Knight]]] was the first real look at what happens to an over-the-hill hero. The body is slower to heal, the acrobatic daring-do that came so effortlessly leaves the body drenched in sweat.

Wrestlers, especially those doped up on steroids, watch their bodies break down and get reduced to the independent circuit for a few hundred bucks a night or signing autographs at lightly attended local events. It’s a sad life, ripe for exploration as a film and Darren Aronofsky wonderfully covers this in The Wrestler

. While everyone made a big deal about Mickey Rourke’s comeback performance, the film itself was the real revelation. It felt like a documentary, entirely shot with handheld cameras, sparing in its soundtrack, and unflinching in the portrait of an aging star who seems good at only one thing. If anything, the movie is a bookend to [[[Rocky]]]. While the Sylvester Stallone film ended with the once-in-a-lifetime championship bout, [[[The Wrestler]]] ends with a rematch of two former warriors 20 years past their prime.

It’s clearly a sad life, as Randy the Ram works during the week at alocal grocer, spending what little money he earns on training,supplements, and tanning to be ready for the weekend matches around theeast coast. His only friends are the promoters and fellow wrestlers;he’s estranged from his adult daughter and has difficulty connectingwith Pam, the stripper.

These two women help showcase how muchhe has lost and how desperately he’s hanging on to what he has left. Evan Rachel Wood as Stephanie is angry and needs time to let her guarddown and accept her father’s attempts to reconnect after a near-fatalheart attack. She’s full of bitter disappointment. Pam, like Randy, is aging in her profession, no longer hot and desirable to the clientelebut having no other marketable skills, continues to strip to supporther 9 year old son. In fits and starts, she accepts Randy’s friendship and then his romantic interest, but possibly too late.

Aronofskyhas written and directed a satisfying drama about a profession that hasrarely been covered in sports films. He gets wonderful performancesfrom his three leads and then fills out the movie with real wrestlersand supporting players who add to the film’s despondent tone.

The DVD release, now available, is as sparse as its star. There’s a solid 42-minute Within the Ring featurette plus a music video of the BruceSpringsteen single. That’s it. The Blu-ray disc (not reviewed) only adds a Wrestling Roundtable.

We cheer our heroes, boo our villains and never stop to wonder what happens when the fame fadesaway. Now we know and it’s a worthy lesson.