Review: The Arcade of Cruelty 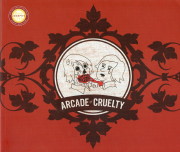 Joseph Patrick Larkin is a self-obsessed, creepy, sexist shut-in with voyeuristic tendencies. And those are his good points.

I only know this because I’ve just read his self-published book [[[The Arcade of Cruelty]]] – but, let me back up immediately, because “self-published” will give you a certain image, and this book doesn’t fit that at all. It’s immaculately well-designed, looking for all the world like the catalog of some very, very unlikely traveling museum exhibit. It has a real ISBN, the unlikely and wildly inaccurate category of “Queer Studies/Occult” on the back, and a little log on the front proclaiming it the new selection of “Joseph’s Book Club” (with a circular logo that looks not at all unlike that of a different book club, one run by a TV host hose name begins with O). In the middle of all that, on the otherwise classy cover, is that serviceable drawing by Larkin of a zombie tearing out someone’s (his?) throat.

Larkin’s art is all at about that level: he’s not a great artist by any stretch of the imagination, but he’s reasonably good at crude depictions of appalling things – and, besides, the writing is carrying most of the weight here, anyway.

And let’s talk about that material, shall we? Arcade of Cruelty is structured as a retrospective of the life of Larkin, who supposedly died in late August of 2007, and was discovered as a great artist only after his death. (Unfortunately, he didn’t see fit to extend that conceit into Nabokovian territory and create a persona to “edit” the book, which could have given us a secondary viewpoint – all of the captions and introductory material is from essentially the same point of view as the “Larkin” pieces.) So Arcade of Cruelty begins with pages that Larkin defaced in his junior high school yearbooks – which, if the point is to immediately lower the expectations for the entire book, succeeds brilliantly, because they’re about as good and interesting as the graffiti of any other twelve-year-old. Following that, we move into Larkin’s high school years, some collages and other artsy stuff he did in college, selections from his “beat-off notebooks” (collages of clipped images of women, mostly of celebrities and underwear models but with a few that I think were his high school classmates), and, here and there, some actual cartooning.

All that other stuff serves to bulk out the book, and to establish that Larkin doesn’t care what we think about him – or, to be more precise, that he wants to present himself as a misogynistic, alienated loner. Since we only know about Larkin from what he tells us here, it’s entirely possible that he’s actually a sixty-three-year old grandfather, deacon of his Cincinnati church and CEO of a major flooring-products manufacturer, happy and contented and filled with joy about life. But I seriously doubt it. The presented Larkin may be an exaggeration – I certainly hope it is – but the general outline is probably close to the real Larkin.

So the center of the book is Larkin’s cartoons, which are crude, with humor entirely drawn from their shock value. Larkin is squarely in the tradition of John Callahan (and, to a lesser degree, Sam Gross) that way; when these kind of cartoons work, there’s a balance between the immediate laugh and the subsequent reaction of “but that’s not funny.” Unfortunately, there’s no sign in this book that Larkin is aware of either of those cartoonists, or of other precursors like Gahan Wilson and Charles Addams, and his work usually misses that first laugh; it mostly isn’t funny. (He does get some good ones in, though, particularly at the end where he imagines a number of other cartoonists’ reactions to 9/11.)

Larkin talks in his interstitial material about being obsessed with women and sex – and yet being mostly sexually inexperienced – which comes across in the cartoons. Larkin’s cartoons about women almost all have the actual or implied punchline “women are cunts,” which is funny perhaps once. The repetition takes the joke from offensive to tedious very quickly, until the reader realizes that Larkin really doesn’t know much about women, or relate to them, or understand that they’re individual people who have their own specific needs and wants. (Of course, this, like most of my review, applies to the Larkin as shown in Arcade of Cruelty; again, this Larkin is a character, or at least a pose.) So: Larkin in the book wants to screw women, but hardly ever gets the chance, and it’s usually lousy when he does…which is their fault. Ha. Ha. Ha.

Larkin relies far too much on using words for their pure shock value without making an effort to build a real joke around them, as in the mostly unfunny section of rape jokes. And his drawing often isn’t up to the challenge of supporting his jokes; he relies on close headshots far too often when he needs to show a larger scene. It’s not that he couldn’t make funny jokes out this material – he just hasn’t actually done so.

Look, I’ve got nothing against edgy, nasty humor – I’m part of the Eisner Award jury that just stuck such masterpieces of good taste as [[[Petey & Pussy]]], [[[Arsenic Lullaby]]], and [[[Chumble Spuzz]]] on the ballot – but neither Larkin’s drawing nor his writing are good enough to support the jokes he wants to tell. His book design could be, though – so perhaps he should refocus his efforts in that area.