Review: A Pair of Jokers 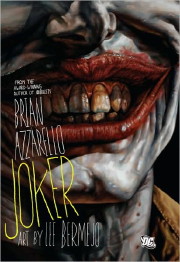 The Joker has always been Batman’s most iconic and popular villain. We can argue why this is so, but it’s been true since at least the ‘70s, and shows no sign of changing any time in the near future. And so, with a major movie coming out last year with a high-profile Joker (though no one knew just how high-profile it would eventually be, after Heath Ledger’s surprise death and a billion dollars at the box office), DC signed up some more Joker-centric projects. Who could blame them?

This one was billed as the closest thing to a direct tie-in with that [[[Dark Knight]]] movie, and this [[[Joker]]] could function as a sequel – the Joker gets out of Arkham as the story begins. It’s pretty blatant, actually, with the Joker looking as close to Heath Ledger as a jumpy lawyer would allow, scarred cheeks (not an element of any previous Joker incarnations I can recall), and a brief Riddler cameo seemingly planned as a Johnny Depp casting call. (On the other hand, Two-Face is still alive in this story and Batman hardly appears at all – just at the end, when Azzarello was nearing the end of his page limit and nothing else would bring the story to any kind of conclusion.)

Joker is not precisely Joker’s story, though: it’s yet another worms-eye view of a superhero universe, the story of small-time hood Jonny Frost (and why, after seventy years of pulp comics, are we still stuck with dumb names like that?), who wants to be bigger than he has any right to be. So he volunteers to pick up the Joker when he gets out of Arkham, and he becomes the Joker’s right-hand man, sort-of. Then there’s a lot of violence – mostly against Two-Face’s gang – to show us how twisted and sociopathic and sneaky the Joker is.

Problem 1: in no plausible universe would this Joker be released from an insane asylum. Even if he were, there would be follow-up visits with a psychiatrist, or something. This Joker just walks out the front door, as if he’s gotten a “You’re sane – come back when you’ve killed another thousand people” certificate and a shiny gold star on his permanent record. And then he’s killing people – in obvious ways that trace back to him immediately – without even a mention of the police. It’s a blatant Idiot Plot.

Problem 2: Jonny has no duties and no responsibilities; he wanders in and out on the Joker’s entourage at will and whenever it best accommodates his internal monologues and Azzarello’s desire to stick him in scenes with Two-Face or whoever else he can think of. Sure, Joker is a lunatic. But even a lunatic needs to have somebody next to him running things, and there’s nobody there.

Here’s the problem: [[[Batman]]] stories can have the old crimelords – guys named dumb things like “Moroni” who are connected to City Hall and corrupt cops and so on, but conduct their business mostly quietly and among themselves – and it can have the screaming psychotic costumes that steal diamonds and slaughter thousands with poisoned fish and so on. Both of those things are fine. But you can’t combine them. The Joker is not the criminal mastermind of Gotham City; he’s way too disorganized to keep the numbers-runners and pimps happy, to keep the whole mechanism of bribes and nepotism greased. He just can’t function in that role, and anybody in crime in Gotham would know that.

So Joker is a swell tour of loony city, for those who like such things. But it makes very little sense as a story, even leaving the occasional undertone that the famous characters simply can’t be killed, as if Azzarello’s internal monologue – or the incessant phone calls from his DC editor – are breaking through the surface of the story. 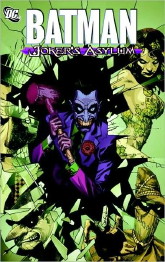 And this miniseries was on the other side of the equation – it ran up to the release of the movie, a thinly veiled sequence of one-shots featuring some of the obvious major villains (Two-Face, Poison Ivy, Penguin, Scarecrow) in vaguely EC-inspired stories all “hosted” by the Joker.

Each issue had a completely different creative team, and an utterly different visual style, but they all had the same skeleton: this particular villain does really nasty things to random bystanders, and then there’s some kind of twist ending. (Don’t worry: the twists are all pretty obvious; they won’t tax the little gray cells of any Batman readers.)

So Scarecrow torments a group of teens who themselves were going to torment the requisite mousy girl with glasses. And Penguin falls in love with a woman he bought from the supervillain supply shop (I swear I am not making that up), but then gets unhappy when she learns what an obsessed nutjob he is. Poison Ivy sets out to kill three developers who destroyed the forest where she got her powers and…well, that’s pretty much it, actually. Two-Face finds a guy who has precisely the opposite disfiguration as he does, and plays the usual post-[[[Saw]]] mind games with him until Batman shows up to do some punching. And, in the opening (and weakest) story, Joker torments the contestants on a game show – but he’s not as bad as the producers are! (One must wonder if the writer of that story has had more rejections from Hollywood than usual recently.)

These are not horrible stories; some of them have quite stylish art. (Not the Joker story, though, which is uniformly, and oddly, the weakest of the bunch.) None of them say anything that wouldn’t have been derided as a horrible cliché in a 1955 comic book, though. But somehow I doubt [[[Batman]]] readers are looking for anything new from their caped crusader, not on his seventieth birthday.