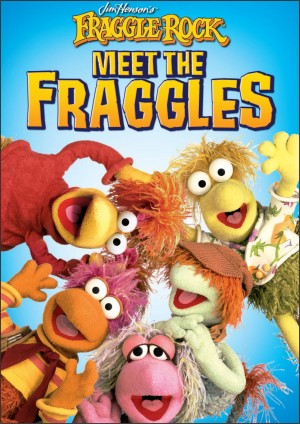 One of the most amazing things about the talented and long-missed Jim Henson is that he was always creating something new, exploring news forms of storytelling and puppetry. While he may have started out with single characters, such as Kermit, he went on to create characters that hawked cereal and interacted with humans on Saturday Night Live. In between, he also helped pioneer engaging and  educational children’s television with Sesame Street’s inhuman inhabitants and created a universe of Muppets. When HBO was looking for original fare in the 1980s, it made perfect sense that they turn to Henson who whipped up a brand new universe of characters, the Fraggles. His Fraggle Rock lasted five seasons and 96 wonderful episodes.

Coming this week is Fraggle Rock: 30th Anniversary Collection, including every episode plus recently discovered behind the scenes interviews, a collectible Red plush keychain, and an all new exclusive Fraggle Rock graphic novel featuring a parent-friendly activity guide. That’s a lot of fun puppetry for the nostalgia-minded.

Also being released is Meet the Fraggles, a six episode sampler for those uncertain if today’s young will respond with the same delight. Wisely, Vivendi Entertainment includes the pilot episode so everyone of the cast is introduced, including the human Doc, who never sees the inhabitants, although his Muppet dog, Sprocket, does.

Much as the residents on Sesame Street were there to help teach numbers and letters, the mixed races of Fraggles were designed as an allegory to the human world. Henson was determined to demonstrate mankind’s interconnected nature and the episodes are fun, but touch on complex issues. Living in their system of underground caves and tunnels, the Fraggle subsist on radishes and Doozer sticks, made from ground up radishes. They can share their dreams if their heads touch one another as they fall asleep.

The series focuses predominantly on Gobo, the leader; Mokey, highly spiritual and artistic; athletic Red; nervous Wembley; and, Boober, the depressive. Whereas the Fraggles were carefree explorers, they frequently encountered the Doozers, who are workers. As a result, there is a great deal of misunderstand and incomprehension between them, allowing the lessons to be learned. Then there are the rules of the Universe, or so claim the Gorgs. Junior Gorg, Pa Gorg, and Ma Gorg are several times the size of a Fraggle and consider them pests.

Described by Henson as “a high-energy, raucous musical romp. It’s a lot of silliness. It’s wonderful”, it began production in March 1982 and debuted on January 10, 1983, becoming the template for many international co-productions that added their own unique elements. The six episodes included on the sampler are culled from the first 37 aired on HBO and nicely focus on the different Fraggles.

We have “Beginnings” that has Doc (Gerard Parkes) and Sprocket set up an old room as a workshop where they discover the first in a series of holes that turn out to be access points to Fraggle Rock. In “Boober’s Dream” we learn that he has a fun side, a split personality named Sidebottom,. There’s also a nice nod to Henson’s other 1980s creation when they go to the drive-in and see a clip from The Dark Crystal. The most charming of the bunch may be “Red’s Club”, where she wants to lead a club that forms without her.

There are no extras on this inexpensive disc but well worth a look if you’ve never experienced these before.