After skipping town last week, I’m back with an all-new spate of reviews for this week’s comics issues. Lots of super hero fare this week, with a few studs and a whole lot of "meh." 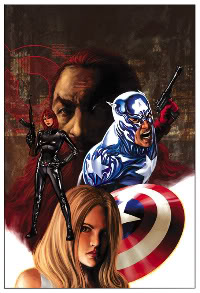 Book of the Week: Captain America #36

— I know, I know. Not a very out-there choice. But, c’mon, this is simply the best superhero book coming out right now. Ed Brubaker sets it up perfectly to test Bucky, the new Cap, by pitting him against some serious supervillains. And we get to see how Bucky is different from Steve Rogers, for good and bad.

And while Bucky brawls his way through that challenge, the defining moment of the issue comes when Bucky can’t summon the Captain America aura to calm a riotous crowd. And, if that’s not enough, Butch Guice’s fill-in art is so good that I didn’t realize he’d replaced Steve Epting until I looked back at the credits.

Oh, and then – SPOILER – there’s that little cliffhanger that a certain dead person might not be so certainly dead.

The Brave and the Bold #11 — Here’s another "can’t go wrong" series (at least until Mark Waid jumps ship). The Challengers see just how tough Megistus is (and just how crazy), then Superman and Ultraman have a zany little team-up only after Ultraman impersonates Clark and runs roughshod through the Daily Planet newsroom. The too-big, too-fun antics culminate in one of those straight-from-the-silver-age moments, when Megistus throws a Green Lantern (the actual lantern, not a hero) into the sun and turns it green. Bad news for Ultraman and Superman.

— I’d be calling this book the best of the week if it weren’t for a weaker than usual outing from artist David Aja. His work isn’t as polished as usual, which means it’s still decent but not great. That aside, this Seven Cities of Heaven storyline is finally coming together in a big way. What’s really remarkable about this issue is how Brubaker and Matt Fraction keep up the excitement with only a couple punches thrown. It’s a perfect setup to the big brouhaha coming down the pike next issue, and offers the line of the week when Danny finally reveals his plan to the villainous Xao: "So we can get out, you dumb son of a bitch."

Batman and the Outsiders #5

— Remember when the most famous character on this team was Nightwing? Then Batman came along, and now Green Arrow is joining the mix. So this is basically Justice League juniors (a point the writing team either intentionally or unintentionally makes through a villain’s banter). This issue was too inconsistent both in writing and in art, the inclusion of villains like Gunhawk and Militia made it seem like a 1995-throwback and the appearance of Ralph and Sue Dibney as spirits who possess other people was just creepy.

New World Order #2 — A kind of intriguing idea that grasps for too many straws and comes back with too few. The quality just isn’t there all the way around.

Checkmate #24 — DC’s espionage team is still chugging along as the crazy serpent cult unleashes half-person, half-reptile creatures throughout the world. Checkmate organizes a mass superhero response, though the story never captures that global scope. It’s also a bit talky. And the line "How do you fight bad religion?" in reference to a would-be suicide bomber was too shallow of a parallel to current events.

— My notes on this issue read as follows: "What the hell?"

Flash #238 — A new writer and new direction, as Tom Peyer takes over for Waid (read our interview with Peyer right here). Wally is still Flash, though he’s broke and has a family to feed. I like that Peyer knows what he wants to do and pushes a new style, though it didn’t entirely work for me. A lot of that had to do with the art, which ventured too far toward cheesy for my tastes.

Ghost Rider #21 — Jason Aaron is a perfect fit for this title, as he brings the comic fan mentality of having as much fun as possible to the book. Evil nurses hellbent on killing Johnny Blaze? Check. All seems lost until they threaten the skullcycle, leading to the line "Nobody touches my ride." My only problems: The side story isn’t effectively incorporated, making the reading too herky-jerky, and the inking and coloring didn’t work.

Justice League of America #19 — This series is essentially a much better done comic book version of the old Superfriends cartoon… for good and for bad. The good is that it’s entertaining and never overly dour. The bad is that it feels dumbed down and the resolution is unsatisfying.

, DC has a new kids’ book out under that title. And like the old cartoon, it’s perfectly fine if utterly innocuous. The $2.25 price point is a good choice, though.