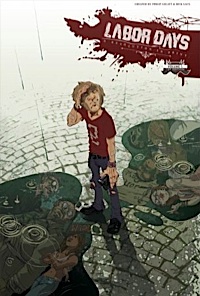 Some kinds of double standards will never die. Take a brutish young American male – dull, unattractive, drunken, and stuck in a dead-end odd-jobs business – and he’s both boring and contemptible. But turn him into a London boy, with the same face and job, demeanor and intellect, and suddenly he’s a hero. This hero.

He’s Benton “Bags” Bagswell, the man who put the “never” in ne’er-do-well. And these two New York-based creators knew that if they made him a Londoner, made him a British boy, then he’d be loveable rather than the lumpish prole the identical New Yorker would be.

Bags opens the story on a morning after the night before – his girlfriend has just dumped him for terminal being-Bags reasons, and a package has been left on his front step, for him to take care of professionally. (On the first page, we see Bags’s flyer, which says “I’m your next handyman for hire! Benton Bagswell’s the name. Are your chores bores? No job is too mundane for me!” Now, I haven’t hired a handyman in some time, but I thought they generally list things they’re reasonably good at, such as carpentry or plumbing or C# coding or knitting, rather than proclaiming that they’d do anything at all, as long as there’s a quid in it for them. One wonders if this approach works for Bags, and, if so, why? It reads very close to the kind of code used for drug transactions and other nefarious activities.)

But, as it is, Bags is unfazed by a job to hold onto a videotape for one day, for an unknown person, and be paid twenty pounds eventually. The tape, is, of course, a quintessential Maguffin, and very quickly – and confusingly, since the early pages of this story have a staccato rhythm that covers ground quickly but doesn’t always let the reader be clear on what’s just happened – a large number of people want to get it.

Bags is shot at, kidnapped, beaten up, and run around over and over again for the next hundred pages, as various factions – some of which make more sense than others, though none of them make a whole lot of sense – chase after him and the tape for their own ends. He gains a mild love interest, whom I’m sorry to say – this is exactly that kind of book – is freckled, wears glasses, and is tougher and stronger than he is in all ways. He also becomes the sidekick – unwillingly, and only more or less – to Rick Stryker, who claims to be a CIA agent. (This may be a private joke, but “Rick Stryker” was also a very minor porn actor about twenty years ago.) It goes on that way for five issues worth of story, so I hope you’ll forgive me if I don’t enumerate every bar-crawl, firefight, and bit of witty repartee.

It’s all poised halfway between melodrama and farce – never quite silly enough to be funny, nor grounded enough to be thrilling. It does tell a complete story, and ends in a place that the reader could easily walk away from, which is rare in a “volume one.” But it’s clear that the story of Bags and his girl Victoria will continue, and that they’ll be on the hunt for History – and I’m afraid I do mean History with a capital “huh.”[[[ Labor Days]]] is an entertaining adventure story, but it does have ambitions, so far unfulfilled, to be more than that. And Bags is a pretty unpromising series character.