Review: ‘The Martian Confederacy’ and ‘Jobnik!’ 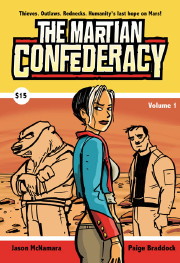 These two books have very little in common on the surface, but, beneath that…they deeply have little in common. But they’re both fairly new, not all that well-known, and self-published by their respective female creators (with an asterisk in the first case, which I’ll get to) – so that’s good enough for me.

The Martian Confederacy: Rednecks on the Red Planet, Vol. 1

[[[The Martian Confederacy]]] cannot be adequately described by the phrase “The Dukes of Hazard on Mars,” but it’s a good first stab. Our two heroes here aren’t brothers – one of them, Spinner, is actually an anthropomorphic bear, though the other, [[[Boone]]], is the expected tough-but-tender he-man type. And the closest thing to a Daisy Duke is Boone’s roommate, the android woman Lou – come to think of it, maybe she fits better in the “other Duke brother” slot.

Well, anyway, this is a story of beaten-down good ‘ol boys and girls battling the corrupt leadership – as personified by “the Alcalde” (whose name I can’t find, if it’s ever given), who calls himself “the legislative, judicial, and executive arm of Martian law” and also mentions that he’s the only lawman on the planet, though he scrounges up some additional muscle late in the book when he needs them. (Even assuming that his official position does give him power, he’s amazingly arbitrary and capricious in his “law enforcement” – the kind of cop who doesn’t survive long in a society where anyone other than him has a gun. I’m deeply surprised that he hasn’t woken up dead a dozen times before this story begins.)

Mars is owned outright by a small number of really nasty corporations, who keep the entire population – how large a population is not quite clear – in essentially indentured servitude, as the rich tourists come from Earth during the high season once a year. (Implying that the writer McNamara either doesn’t know much or doesn’t care much about orbits.) It’s 3535, after the usual humorous loss-of-all-data and resulting reborn society with quirky touches like “shatners” for money. And there are lots of anthropomorphics, who may or may not be an underclass even within the downtrodden Martian population. (They have their own bars and the Alcalde hates them – but plenty of groups have their own bars, and the Alcalde hates everyone.) And even odder things, like the woman Sally, who has heads and arms growing out of each end of her torso and split personalities to match. (Try not to think too much about her plumbing issues – that way lies madness.)

Confederacy opens with the Alcalde discovering that the proverbial lone scientist – called “the Professor,” as of course he must be – has discovered a moss that will hyper-oxygenate Mars’s atmosphere, growing very quickly and making the currently too-thin air hefty enough to breathe without apparatus (and thus damaging the profits of one of the aforementioned evil corporations). The Alcalde murders the Professor, smashes his samples, and burns down his home – but some of the moss may have survived. And, of course, our heroes were the Professor’s friends, so they investigate and get into trouble themselves.

Again, I’m not entirely clear on how the Alcalde can be 1) the entirety of the Martian government, 2) publicly elected, and 3) a violent, repressive asshole. But he is, and he does. But he does get his in the end.

[[[The Martian Confederacy]]] is a story I suspect I wasn’t supposed to take as seriously as I have here – it’s an adventure tale about the usual rag-tag band of rebels battling the evil bosses, and it works well on that level. (When I start talking about the plot of anything, I need to pick it apart – it’s a sickness, I think.) Braddock’s art is dynamic and energetic, and the whole thing is colored in tones of red – which keeps printing costs down, gives an atmospheric “Martian” feel, and adds more visual interest than pure black & white would.

This does say “Volume 1,” so there will probably be more. The major conflict of this book, though, is over, so it does stand as a complete story. (Any second volume would need to be about something at least slightly different – though the heroes are still available for whoopin’ and hollerin’ and raisin’ hell.) 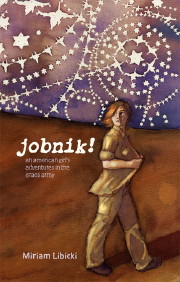 On the other hand, [[[Jobnik]]]! is non-fiction, completely the work of one creator, and collects the first six issues of a self-published comics series. So it’s a bit more serious to begin with than The Martian Confederacy is, being set in the real world among (presumably) real people and events.

The creator is also the main character – a younger version of the cartoonist, Miriam Libicki, during her time serving in the Israeli Defense Force in 2000 and 2001, as the second intifada began. But Libicki was what was called in a prior war a REMF, and what her fellow soldiers in Israel called a “jobnik” – a rear-echelon soldier, a desk jockey, safely back from the fighting.

Libicki doesn’t specifically show a desire to be fighting directly – though there’s a lot of casual racism and dehumanization towards Palestinians among her fellow soldiers, as you’d expect in a time of conflict – but does believe that she was given a minor, unskilled job because of a psychological appraisal. The implication is that she disagrees with the appraisal – “overly emotional…possessed of anxieties (especially social), unable to form interpersonal bonds, sexually conflicted” – but the following pages show that the younger Libicki was at least partially all of those things.

The events of Jobnik! are mostly set on her unnamed base, where she feels alone, unloved, and unrespected, working as the only secretary in an infirmary. (It’s not quite clear whether Libicki has too much or too little work – or even both, in turns – but she doesn’t seem to be doing her job well, as her superiors see it.)

These six issues cover about five months, in which Libicki tries, but mostly fails, to connect with her fellow soldiers (including some sexual encounters in which she’s much more used than using). And then she takes a trip to Toronto, Canada to attend a convention of fans of the band Moxy Fruvous – this takes up the entire sixth issue, and is a big change of gears. Libicki is seen again loosely tied to a social group, but she’s more naturally part of it, a friend rather than just someone else who happens to be there.

The events are all separated, though – Libicki today isn’t drawing conclusions from these experiences in her past, just presenting them. This might be because she isn’t trying to portray a particular slant on her own life, or just that she hasn’t figured out what these experiences meant to her yet. Either way, Jobnik! sometimes floats in air, with stories that may be true, and may have happened to Libicki exactly this way, but don’t clearly lead from one to the other or to any conclusion.

Libicki’s art is soft and rounded, in what look like pencils rather than inks – her people are doughy and heavy-lidded, almost like fabric dolls or uncooked bread. It’s a different look for a group of soldiers, but it can be difficult to tell her characters apart – particularly the different men of the base, whose attitudes towards Libicki are all very similar.

Jobnik! isn’t great, but Libicki does have a perspective rarely seen in American comics, and is telling a story from her own experience rather than the fifth-hand version of someone else’s. And that’s enough to make it worth reading, and to be worth wondering where she will go from here – what other stories will she have to follow once she’s run through her IDF experiences?