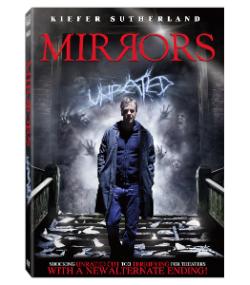 Mirrors]]] are a reflection of reality or can be twisted into something that reveals another way to look at the world.  Ever since they were invented, the Greeks first thought your soul might be trapped within.  Through the years, stories have been told about what mirrors do or do not reveal.  Demons were thought to be revealed by mirrors while vampires do not cast reflections. It’s a rich subject that can make a wonderful thriller or horror movie.  The summer 2008 Mirrors, directed by Alexandre Aja, is not a worthy addition to the sub-genre.

Largely based on 2003’s [[[Into the Mirror]]] from South Korea, the movie involves a mirror universe, a demon, a divided family, and lots of ominous music.  Keifer Sutherland stars as Ben Carson, a New York police detective currently on suspension and taking a job as a night watchman at an abandoned department store to support his family.  Carson’s a mess.  He’s defined by his job and without it, he began drinking which led him to be thrown out of his home by his loving wife Amy (Paula Patton), deprived of access to his two children.  Instead, he’s sleeping on his sister Angela’s (Amy Smart) couch and ripe for a mental breakdown.  As a result, he’s slow to accept that he’s seeing things in the mirrors that remain remarkably clean.

Over the course of nearly two hours, he learns that there’s a malevolent spirit trapped in the mirror world and has been accessing the real world through mirrors to manipulate various people to try and free it.  Being the good cop that he is, Carson traces the building’s history and learns it was once a psychiatric hospital, and its unique treatment room remains intact.  He then traces the key patient who was treated there and learns she had been possessed by the spirit but it was cast into the mirror and others will continue to suffer and die until the demon is vanquished.

Over the course of nearly two hours, the audience is treated to a tremendous amount of unexplained characterization and world building.  Carson’s predecessor sends him a box of clippings that provide a key clue, but since it was shipped after his death and to someone he never met, we’re never told how that worked.  We know little of this mirror world and how some they move through space and time, which becomes a vital plot point towards the climax. The police investigations into some of these incidents, including Angela’s death, never seem to be carried out.

The most satisfying thing about the film is the final scene and even that leaves one scratching your head because it defies the film’s shaky internal logic.

Sutherland is either pathetic or frenetic and never anything in between while Patton at least shades her character with more subtly.  Smart is wasted since she’s given nothing to do but has a nice death scene.

The movie creates a nice mood in the burned out department store but nowhere else and Aja’s direction is fairly flat. The heavy handed music from Javier Navarrete does little to help set the mood since it’s ominous at all times.

The single-disc from Fox Homes Entertainment, on sale this week, comes complete with two versions: the theatrical and an unrated version that’s just a wee bit longer and offers nothing compelling.  Extras include a 48-minute Making Of documentary that shows how earnest the filmmakers were; an 18-minute piece on mirrors throughout history, and an assortment of deleted and alternate scenes which make for interesting viewing but none would have made the film any more entertaining.