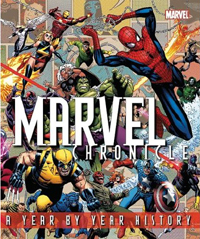 Marvel Comics kicks off their 70th Anniversary celebration with [[[Marvel Chronicle]]], a wonderful hardcover book, published by DK Publishing. The coffee table book comes in a hard box complete with color and black and white reproductions of Jim Cheung’s frenetic cover. (The diecut M for the front cover is a nice touch.) As is sadly too often the case these days Stan Lee’s introduction is full of bombast and enthusiasm but tells us nothing new.

The book is a year by year account of the company from its humble beginnings as an offshoot of Martin Goodman’s pulp magazine line to its place atop the comic book heap in 2008. The book nicely spans from 1939 through June 2008 (following cover date convention).  Each decade has been handled by one of four writers – Tom DeFalco, Peter Sanderson, Tom Brevoort, and Matthew K. Manning – and provides month by month highlights with copious illustrations.

The chapters on the 1940s (Sanderson) and the 1950s (Brevoort) are the most interesting in how they show the company’s breadth, lack of depth, and ability to flood the market with titles on whatever is popular at the moment.  While it’s fascinating to see the seldom seen funny animals and teen humor characters slowly replace the super-heroes, it’s also interesting to note that after [[[Captain America]]], Sub-Mariner, and the Human Torch, the company failed to score another major hit character for decades.  The write ups also nicely tell us which characters, creators or innovations get revived in the future.

Marvel, of course, finally came into its own with [[[Fantastic Four #1]]] and the set-up is wonderfully handled by Brevoort, who notes that when the company was forced to cut its output to eight titles a month, Stan Lee took the opportunity to get better as a writer, and use only his best artists – Jack Kirby, Steve Ditko, and Don Heck for the most part.

Once the FF hits, the book devotes four pages per year and things get hectic as the pace quickens.  But, at the same time, we lose the leisurely passage of time and getting to know the players.  While the ‘50s gives the late Joe Maneely his due, the Marvel Age stalwarts such as John Romita, Gene Colan, Jim Steranko, and Herb Trimpe get a nod but little else. Instead, we’re treated to entries noting the arrival of Blizzard and Stilt Man.

Similarly, the context of the comics is somehow lost as the pace quickens and while Manning’s later chapters do a terrific job shoehorning in the rapid release of new titles, characters, and concepts, perspective is also lost.  Maybe one or two items per year should have been trimmed in favor or analysis.

Every now and then we get two page spreads that blow up a page or cover but they seem like space fillers and don’t’ tell us much.  It’s not until a spread talks about John Buscema’s influence that the spreads become useful.

Since this covers Marvel’s history, it’s nice to see mention of its licensed titles although I feel [[[G.I. Joe’s 1980-s]]] influence is underplayed.  Also, several facets to Marvel’s growth are missing such as the Spider-Man album from the 1970s, the two 1960s prose novels,  Pocket Books line of prose novels from the 1970s, the Japanese live action [[[Spider-Man]]] television series and the comic strips.

Being a celebration, Marvel’s missteps such as the [[[Clone Saga]]] or the [[[New Universe]]] are severely underplayed as were the editorial excesses of Jim Shooter and later B ill Jemas.

The above are nitpicks.  The books Is a treasure trove of familiar and unfamiliar facts and information.  Each year comes with a sidebar chronicling current world events so you can follow the evolution of the world and the Marvel Universe.  The graphics chosen allow every artist a moment to shine making this a celebration well worth putting on your bookshelf.

If you don’t have this yet, make certain you e-mail Santa immediately.