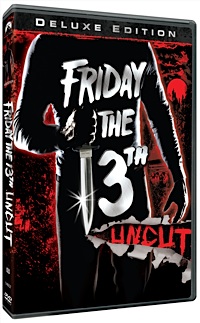 , they were merely trying to cash in on the success of John Carpenter’s [[[Halloween]]]. The seasonality for horror and the death of the promiscuous were copied along with the plucky virginal heroine.

What they did, though, was layer it with an interesting story of a mother’s grief for her son, the only thing to sustain her for two decades. Betsy Palmer gave a nice performance as the murderous mom, grounding the story more than it probably deserved.  The movie, shot on a shoestring budget, went on to become a major hit and an unexpected series for Paramount Pictures.

With Platinum Dunes, Michael Bay’s schlock remake arm, striking fresh gold with the remake this month, Paramount Home Video released the first three films in the series as deluxe editions. Under the snazzy lenticular covers are the same quickly made, poorly acted and over scored films, with a smattering of extras.

The first film told a story with a beginning, a middle, and an end as a group of teens attempted to reopen Camp Crystal Lake, long closed after two counselors were brutally murdered in 1958.  “Camp Blood”, as the locals called it, needed some TLC and they were readying it a new summer but one by one, the teens vanish, killed by an unseen assailant.  Along the way, we get our requisite one scene with a bare boob, lots of talk about sex, and a group of under-developed characters headed by the heroine, Adrienne King.

When we learn that the grieving mom was behind the deaths, blaming careless counselors on her son’s death, you feel something for her.  And once she’s dispatched, of course, you get the shock ending straight out of Carrie.

The second film picks up immediately after, just months after the first ends.  Adrienne King is still recovering from the emotionally difficult period but gets one final shock at finding Betsy’s severed head in her refrigerator (starting the whole women in refrigerators trend, I suppose) and Jason actually alive and seeking his own revenge. 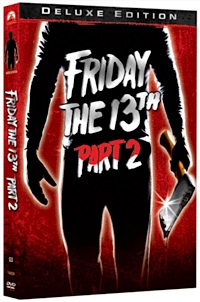 Paramount decided the second film would feature Jason, which chased away Cunningham and Miller. Smart men.  After all, this now asks us to expect that both Jason and Mrs. Voorhees lived off the wild in the woods for two decades, never coming across one another. We see where Jason lived, somehow crudely living off the land without being taught to read, write or use technology.  (Where Mrs. Voorhees lived or how she survived was never addressed.)

We return to the lake but a different camp site with the same warnings from the local crazy man. Interestingly, the comely teens assembled for counselor training aren’t the first to die but the crazy man and the local sheriff.  That a lawman is dispatched early on with no response from his brethren shows the lack of attention given to the story.

With a larger ensemble of ciphers, we watch Jason kill them one at a time with no thought given to why he is killing.  Mom’s been avenged and he had made a life for himself.  Was his death at the hands of careless counselors fueling this mania? Not once is a theory offered up.  Instead, we watch as Jason kills one after another until all that is left is Amy Steele.  She smartly tries to pass herself off as Mom and their showdown is the most interesting part of the second film.  Jason is hacked, slashed, and left for dead but his body is never recovered nor are the police even looking for him.

By then, the film was raking in such big bucks that Paramount wanted more, figuring they could squeeze one more film from the character. Hedging their bets, they opted for the fading fad of 3-D for this one, which saw Steve Miner once more behind the camera to direct. 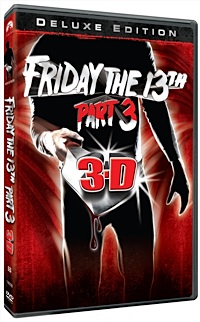 We’re years later and our troupe of non-entities head out to a new lake and a weekend of fun and sex.  Jason spoils all of that as he chases and dispatches the kids who also have to contend with a stereotypical Latino gang just for variety. The 3-D effects add some fresh shocks to this and this is the film where Jason finally dons his signature hockey mask. Chris, played by Dana Kimmell, has had some horrible experience two years previous, and is returning to the scene of the incident and faces down her psychological issues, which makes her the most interesting of the three heroines although her final scene on the lake is reminiscent of the first film and pushes her over the edge.

Of course, the movie did so well that a series continued until we got Jason X and then things have circled back to remaking the first, although they forgot to bring in anything resembling a rational excuse for Jason to be doing his thing. (And since I was working at [[[Fangoria]]] at the time, it was a kick seeing the magazine get a shout out about an hour in.)

Overall, the packaging for the deluxe editions is handsome enough and they come with a variety of extras making the set worth owning if this is your thing. If you have previous versions, there’s little in any of these to make owning the new ones compelling.

The first film restores some extreme seconds of gore and violence but none make you recall what you missed in the theater. The transfer is also looking pretty sharp. Extras here include a reunion panel from 2008 featuring a handful of the filmmakers plus actors Adrienne King, Betsy Palmer, and Ari Lehman, who played Jason for ten seconds in the film. Fresh Cuts: New Tales from [[[Friday the 13th]]] has some one on one interviews but they repeat some of the same stories and you long for the featurettes from the 2004 box set of the films. You get a short interview with Cunningham which offers little in the way of insight. Rounding out the disc is [[[Lost Tales From Camp Blood: Part 1]]], a slasher short by Andrew Ceperley that feels tacked on and has nothing to do with the franchise.

Part II has more minimal extras, dropping the meager ones from the 2004 box set. We get an improved screen transfer then a few new featurettes. The best is Inside Crystal Lake Memories, where author Peter M. Bracke discusses some of the backstory to how the franchise came to be and how the sequel came about. He offers some thought behind the odd ending which felt like a scene was missing, which is true. You also get Friday’s Legacy: Horror Conventions with cast and crew reminiscing plus Jason Forever shot at a Fangoria Con reunion of Jasons panel.  Then there’s the irrelevant [[[Lost Tales from Camp Blood Part II]]].

For the 3-D film, you get the least amount of goodies since the disc offers you a 2-D and 3-D option. The 3-D plays fairly well on your TV and laptop and you get two pair of glasses so you can watch with a date. The only extra is a theatrical trailer.