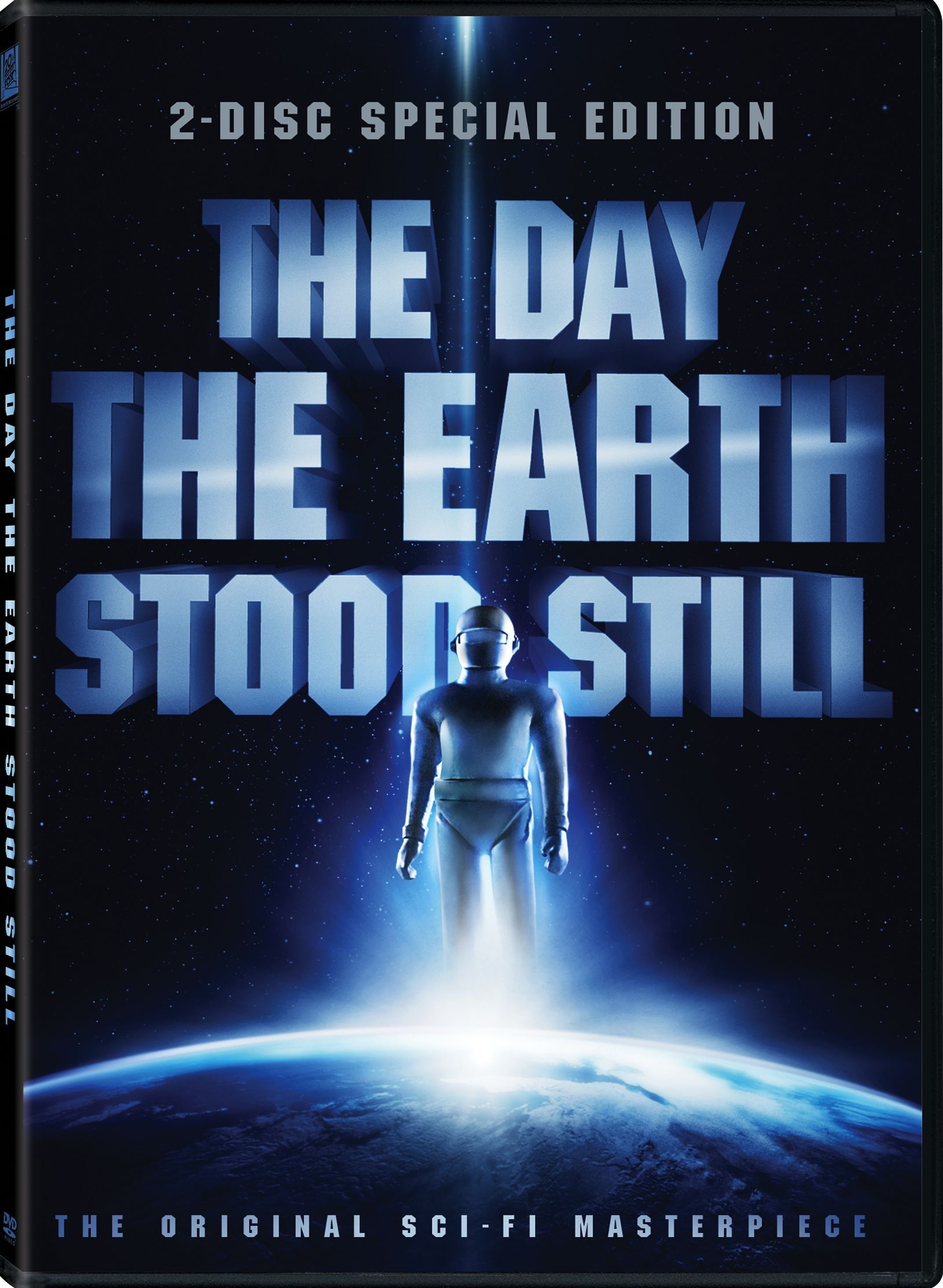 The very best science fiction comments on today’s problems wrapped around a provocative story involving characters and situations that people can relate to.  They are also snapshots of moments in time and The Day the Earth Stood Still

is a wonderful look at America between the end of World War II and the Cold War that gripped the world for decades.

There are few genre films of this era that hold up today and if you have never seen it, this two-disc commemorative set, on sale today, is well worth your attention.

The film is loosely based on a Harry Bates short story but thoroughly rewritten by Edward North and directed with a documentary and film noir feel by Robert Wise.  The tale of first contact is nothing new, but it’s all in the telling.  In this case, the film and its characters take matters very seriously. Wise is to be credited for giving us a culturally diverse montage of reactions throughout the movie, so we’re reminded that the arrival of the flying saucer affects everyone living on Earth.

Wise and Fox’s executives were smart to cast newcomer Michael Rennie as Klaatu since audiences had no preconceived notions when they see him, as opposed to Spencer Tracy, who we learn in the extras, wanted the role.  His lean figure and serious demeanor made him appear otherworldly and human at the same time. He’s paired nicely with Patricia Neal as a widow raising her young son, Bobby (Billy Gray).

So typical of mankind, no sooner does Klaatu emerge from the starship than a nervous G.,I. fires and wounds him, activating his security robot, the mammoth Gort.  When Klaatu asks the President’s secretary to arrange a meeting with world leaders, we get a little political satire as leaders of state put ego ahead of statesmanship. Klaatu decides to go out among mankind and find out something about the people of Earth and there he takes up residence at the boarding house where Neal lives.

The scenes of Klaatu and Bobby touring Washington are nice as we see things through fresh eyes which leads Klaatu to find Prof. Barnhardt (Sam Jaffe), the stand-in for Albert Einstein, the era’s recognized smartest man alive. Fear wins the day as Klaatu is shot once more but miraculously survives in time to deliver a warning.  Mankind’s use of atomic weapons must never expand into space, threatening the galactic peace.  If they cannot do this, the planet will be reduced to a cinder. And then he leaves, mission accomplished.

Sure it’s a cautionary tale and far more simplistically told than the remake coming December 12 which changes fear of warfare to fear of ecological disaster.  Still, for its time, the movie is quite sophisticated in its script, direction, acting and message.  There’s an ironic moment as we see medical staff marvel over Klaatu’s prolonged lifespan as they light up cigarettes.

The first disc opens with Exclusive First Look At The New Movie [[[The Day The Earth Stood Still]]] which probably should have followed the feature.

The extras put the film into context starting with archival commentary from Wise (who died in 2005) and Nicholas Meyer (who followed his footsteps as a Star Trek director). The Making of The Day the Earth Stood Still does a nice job telling you the basics behind the film’s history but it’s the second disc that gives you “Decoding ‘Klaatu Barada Nikto’: Science Fiction as Metaphor” giving you the historic perspective.  The first disc also offers up “The Mysterious, Melodious Theremin” which even puts Bernard Hermann’s haunting score into perspective.

On the second disc there’s also a fairly rote look at the history of flying saucers plus bio pieces on Bates and North.  North made an anti-atomic bomb documentary, [[[Race To Oblivion]]], starring Burt Lancaster, this is also included.  Original trailers and a 1951 Fox Movietonews  round out the visuals. Still galleries including lobby cards, one sheets and the complete shooting script.