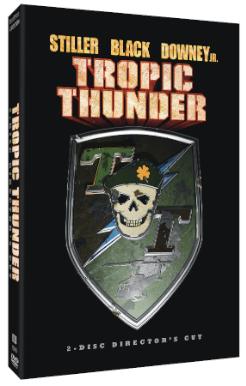 Movies about movie making can be filled with inside jokes that lose the audience or use the miniature world of a set to tell a dramatic story.  Then there’s [[[Tropic Thunder]]], a broad comedy poking fun at multiple Hollywood types in one stroke.

Ben Stiller, aided and abetted by Justin Theroux and Etan Cohen, wrote a movie about a stereotypical misfit cast that is making a war story but find themselves in a real jungle battle.  Not the most original of ideas, but as handled by the ensemble, it’s remarkably refreshing and entertaining. When the film opened in August, it was like a tonic to the explosive super-heroic fare and lackluster comedies.

The movie sends up Apocalypse Now, Full Metal Jacket, and other modern day war dramas, not just in structure, but in the way scenes are staged, lit, and performed.  There’s affection here, respecting the source material but using it as a launch point for some strong satire.

Stiller is joined by Jack Black, Robert Downey, Jr., Steve Coogan, Jay Baruchel and Danny McBride as the actors who are either over the hill, uninsurable or so full of themselves that there’s a wonder how the studio green lit the project in the first place.  First-time director Damien Cockburn (Steve Coogan) is in over his head with the uncontrollable cast and mounting budget issues.  He’s supported by his dancing producer is played with delicious irony by Tom Cruise under pounds of latex and steals every scene he’s in.

Everyone else has heaped superlatives on Downey as playing an actor who turns himself black to play an African-American character so I’ll skip him and note that Baruchel, McBride, Coogan and Brandon Jackson are relatively new to me and rise to the occasion, not letting themselves get overshadowed by the more recognizable names. Nick Nolte has a small role and seems interested in spoofing his career.

The film is clearly not for everyone but film aficionados will enjoy it along with fans of Stiller, Black and Downey.  The Director’s Cut is 13 minutes longer and the only version included in the two-disc set.  In most cases, scenes are a little longer.  One key addition is a party sequence that spotlights the actors before they begin shooting the troubled film.

The fun continues in the second disc filled with features.  Divvied up into bite sized chunks, you can see how the film was conceived, designed, shot and edited.  Extended and deleted scenes come with some good commentary and an alternate ending shows they made the right choice. The cast each get a profile and there’s a fun mockumentary, [[[Dispatches from the Edge of Madness]]], satirizing documentaries the Eiropean host goes in search of Cockburn during the troubled production.  There are other features to round out the disc and are the usual assortment we’ve come to expect.