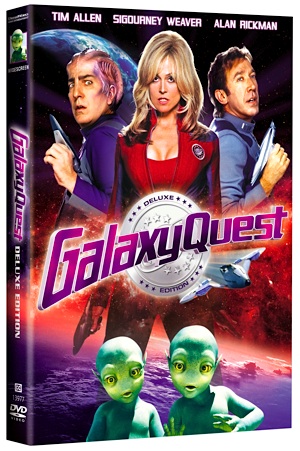 does not turn 10 until Christmas, but with all the [[[Star Trek]]] hoopla this month, Paramount Home Video wisely releases the 10th anniversary edition on Tuesday.

This love letter to [[[Star Trek]]] and its fans was the commercially successful and satisfying in joke-filled story of the actors from a cancelled science fiction classic being recruited by interstellar fans in their time of greatest need. Can actors rise to the role of hero? Well, we pretty much know how this will end, but still, getting there is great fun.

Opening with a science fiction convention that is remarkably true in feel, the movie shows us how trapped the performers feel in these roles, along with the petty squabbles that have plagued them for years. Tim Allen plays William Shatner, or that is, the Shatner who felt trapped by Captain Kirk before letting himself in on the joke and embracing it. There’s the marvelous Alan Rickman as Alexander Dane, would be Shakespearean actor, trapped under the latex of his television alter ego, and hating every minute of it.

While some of Star Trek’s supporting players embraced their cultural status and used it with success, none of these performers have had similar luck and are reduced to store openings and convention appearances for income.

Until they board the real NSEA Protector, built with remarkable fidelity by the Thermians, who hope the stellar adventurers can help them avoid being conquered by a hostile race. From that point to the conclusion, we see these people grow and learn, while we cheer their every step. Writers David Howard and Robert Gordon take the fan experience and bring it to life, with tremendous affection. Director Dean Parisot is also fully committed to respecting the source material and has great fun while showing tremendous respect for his audience.

The cast is filled with wonderful performances from Sigourney Weaver, Tony Shalhoub, Sam Rockwell, Enrico Colantoni, and Missi Pyle. A young Justin Long fills in for those of us in the audience, using the fan collective to help save their beloved heroes/

Some have hailed this one of the best Star Trek movies ever made and in many ways they’re right. The movie succeeds in being rewatchable – in snippets on cable as you surf – or all the way through as on the DVD.

Affordably priced at just $14.99, the movie comes complete with a slew of new featurettes so the celebration continues. Historical Documents: The Story of [[[Galaxy Quest]]] features fresh interviews with Gordon and Parisot along with members of the cast and Star Trek writer/director Nicholas Meyer. There is also Never Give Up. Never Surrender: The Intrepid Crew of the NSEA Protector, By Grabthar’s Hammer, What Amazing Effects, Alien School – Creating the Thermian Race, and Actors in Space. All provide interesting comments and an appreciation for the filmmaking process.

When Sigourney Weaver couldn’t attend her agent’s birthday party, she got help from Daryl Mitchell to craft a rap then was backed by Sam Rockwell, Missi Pyle and Mitchell. The short clip is very entertaining and shows some of the camaraderie that happens during a shoot.

From the 2000 DVD release are the deleted scenes and the theatrical trailer. All in all, this is a nice tribute to a terrific film, one that belongs in your library.