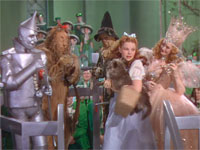 This past weekend I was in California to attend my brother’s wedding. It was a lovely afternoon; they held the ceremony in the upstairs loft apartment attached to the back of their house, and the reception in their back yard. I still can’t figure out how they fit 120+ people in that space, but they did. And my brother looked so ecstatic, and my new sister-in-law so beautiful, and I remember thinking, “He’s finally paired off the way Robin and I are! Another happy ending!”

On the plane ride back to New York, JetBlue’s satellite TV reception wasn’t working properly on many of their channels (aside from that our flights were terrific, and I highly recommend JetBlue — there’s no first class to fight through and get sneered at, the seats were comfy with plenty of leg room, it’s the first time I haven’t had to ask for a seat belt extender, and the new T5 terminal at JFK is spiffy indeed) so the crew arranged for us to see the normally-charged second-run films for free. Comics geek that I seem to be less and less, I opted not to watch The Incredible Hulk, in favor of back-to-back viewings of Get Smart and Baby Mama.

I enjoyed both movies more than I thought I would. I like how Get Smart was updated for the 21st century just enough to have Maxwell Smart be internally believable as mostly competent but just a little accident-prone. Lots of identification there, you betcha! And although the age discrepancy between Steve Carell and Anne Hathaway saddened me, at least there was a decent in-story explanation for it. Besides, they’re both fun actors to watch, and easy to root for as they follow the formulaic plot to its climax and wind up (as did the characters in the original series) together, set to have further open-ended adventures.

Baby Mama was a terrific vehicle for all the main actors involved, wasn’t anywhere near as cringeworthy as the ads made it seem, and had a Happy Ending. Multiple Happy Endings, in fact, all featuring the apparently ultimate goal of all women — to give birth. The premise had Tina Fey’s character unable to conceive, but (and I don’t think I’m spoiling something which was pretty heavily telegraphed throughout the film) she winds up pregnant towards the end after, of course, having established a Real Relationship with a guy (is it my imagination or is Greg Kinnear always cast as the thinking woman’s love interest?) who doesn’t hesitate to call her a dick when she acts like one (probably my favorite bit of dialogue). Anyway, amid the smiles and occasional chuckles there’s even a running gag about how fertile a decidedly middle-aged Sigourney Weaver is. It seems in Hollywood every woman gets pregnant right away, preferably after she’s fallen in love with the right guy — a pretty tortuous theme for someone like me who’s wanted a kid as much as Fey’s character did but lives in the real world.

But there’s something inherently appealing about pairing off, whether with your True Love or a Mini-You, signifying completion. Hey, I’m a sucker for happy endings too. I often lament that more comics don’t have happy endings or, for that matter, endings of any kind. Most Big Two stories prefer to go the serial route, like soap operas and, well, life.

So maybe comics have the right idea after all, concentrating on happy voyages rather than happy destinations.

As you’ve probably figured out by now, this is the last week that I and my fellow ComicMix columnists will be writing for you. To tell you the truth, the timing of this closing chapter works out pretty well for me. Throughout most of my tenure here I was waiting for the other shoe to drop at my last job, then unemployed. The side effect of those undesirable situations was that I had more leisure time to write than I now have at my present position. But my current employer is robust in a downturned economy, I’ve become a “go-to” person for coworkers, I’m as indispensable to my bosses as I can make myself in a few short months, and I’m very, very content.

This doesn’t mean I’ll never write a pop-culture column again. But first I think I want to get back into my fictional writing for awhile. Far too many ideas are still in the germination stage, and I eagerly anticipate the challenge of bringing them to fruition. Plus there’s real life to deal with, beginning with finding out whether we’re going to have more hard times ahead of us as a country or whether the man we elect next Tuesday can turn things around for the better. Even if things don’t go as we wish electorally, autumn is still in full glorious foliage, and Hallowe’en this coming Friday will mark the start of the most fun holiday season I’m expecting to have in years. The adventure of my life continues, even when it’s not captured in pixels.

But of course there’s always my blog, where I’ll concentrate the majority of my non-fiction essay writing once I find myself with leisure gaps in my hectic days. I still manage at least one post of new content daily on Pen-Elayne on the Web and, as the ComicMix chapter of my life comes to a close, I’m hoping to ramp up a bit more there, if only to use my singular soapbox to post all the things I’m forgetting to say here!

And hey, I’ll still be around in person. Robin and I are attending the National the weekend of November 15 and 16, and the first issue of the Peter David-written Sir Apropos of Nothing, on which Robin does full art (pencils, inks and colours) will debut in your local comic shop on Wednesday, November 26 (the day before Thanksgiving). And we’ll probably take in next year’s New York Comic Con, although it’s going to be weird (a) paying my way and (b) not hanging out in the ComicMix office.

It’s been a great ride, 88 columns for me in about a 20- month span, and I’ve really enjoyed it. I especially want to give Mike Gold a huge online hug for approaching me in early 2007, asking me to be one of his paid writers, and assuring me that, as far as he was concerned, I belonged alongside the likes of big-name comics pros like Denny O’Neil and John Ostrander and Michael Davis. I couldn’t have asked for a bigger ego-boost, and it couldn’t have come at a better time.

I also want to thank the rest of the ComicMix staff for their continued friendship, patience and understanding during my many transitions here. Lastly, I’m very grateful to every It’s All Good reader and commenter out there for your enthusiasm, your wit, your intelligent feedback and your indulgence. It’s been a very happy voyage indeed, but we’re coming in for a landing now. So as I used to say in my old INSIDE JOKE self-publishing days at the end of every cover essay, “see you in the funny papers!”

Elayne Riggs has her tray table locked and her seat in the upright position. She expects to give birth to lots more essays and stories before her final destination. She thinks she’ll miss you most of all. But don’t worry — it’s all good.

Elayne Riggs is the creator of the popular blog Pen-Elayne on the Web. She was a founding member of Friends of Lulu, an organization dedicated to increasing the involvement of girls and women in comics, as readers and creators. She is married to inker Robin Riggs, with whom she shares two cats, and has odd love/hate relationship with Hillary Clinton.