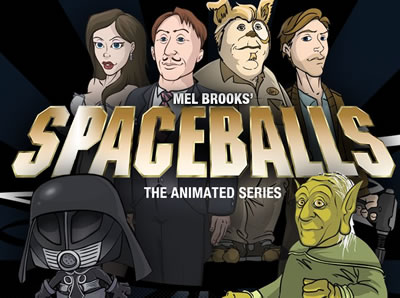 There was once a time when Mel Brooks was considered a pioneer of comedy, a trendsetter in satire,  even a spoof master, but if the debut of [[[G4’s Spaceballs: The Animated Series]]], that time has long passed. This was a perfect example of how NOT to reinvent a franchise. It was bound to happen with films being made of Broadway shows and Broadway shows being made of his films that Mel Brooks (who is not only attached as Executive Producer, but also reprises his roles as Scrube and Yogurt) would try to reinvent the [[[Spaceballs]]] film with a poorly produced animated series, but whether it was a lack of his own creativity, or the network’s inane intention to hit a demographic, this show was terrible.

The series is supposed to follow the events of the film, provided that the ending never happened, and Lonestar and his band of heroes gets in wacky misadventures every week to foil the plans of Dark Helmet and President Scrube. There are various minor pop culture and [[[Star Wars]]] references, but it’s hard enough to get through the “jokes” as it is.

It’s unknown what legal issues went on during the production, but this show was originally slated to be released sometime in 2007, and then, without mention, disappeared until recently. The series has the feel of a flash-made web series, and is even edited for release on the G4 network. This only hurts the show more because instead of getting the vulgar visual humor, we get cut-and-paste images and voices that were changed in postproduction for the G4 demographic of boys under the age of 17.

The show could actually work, if they didn’t trade in the impeccable timing and vaudevillian dialogue of the movie with boob jokes and outdated Star Wars Episodes 1-3 references. The voicework falls in line with the poor production, as Brooks comes back to voice his characters President Scrube and Yogurt, while Daphne Zuniga comes back for Princess Vespa. The show, as a whole, is just awful and probably won’t last very long. If one day they decide to drop the censor bars and release the series on DVD or the web, it may be worth a watch, but until then; it should probably be avoided. RATING: 0/10