Right off the bat, to put to rest an already angry legion of fans who want to know why this movie exists instead of Allan Heinberg’s [[[Young Avengers]]] or even Tom DeFalco’s [[[Avengers]]] Next as a series or movie, know that this animated film is a great self-contained story done in the vein of Marvel’s other animated DVDs, and deserves a close look from anyone who can call themselves a Marvel–or even an animation fan. With that said, this story is not for any fan who cannot take themselves out of the grown-up world of [[[Skrulls]]] and [[[Hulk Wars]]]. In order for an adult to enjoy this, you need strip down to your inner child (metaphorically speaking) and watch the movie with a purely childlike mindset. 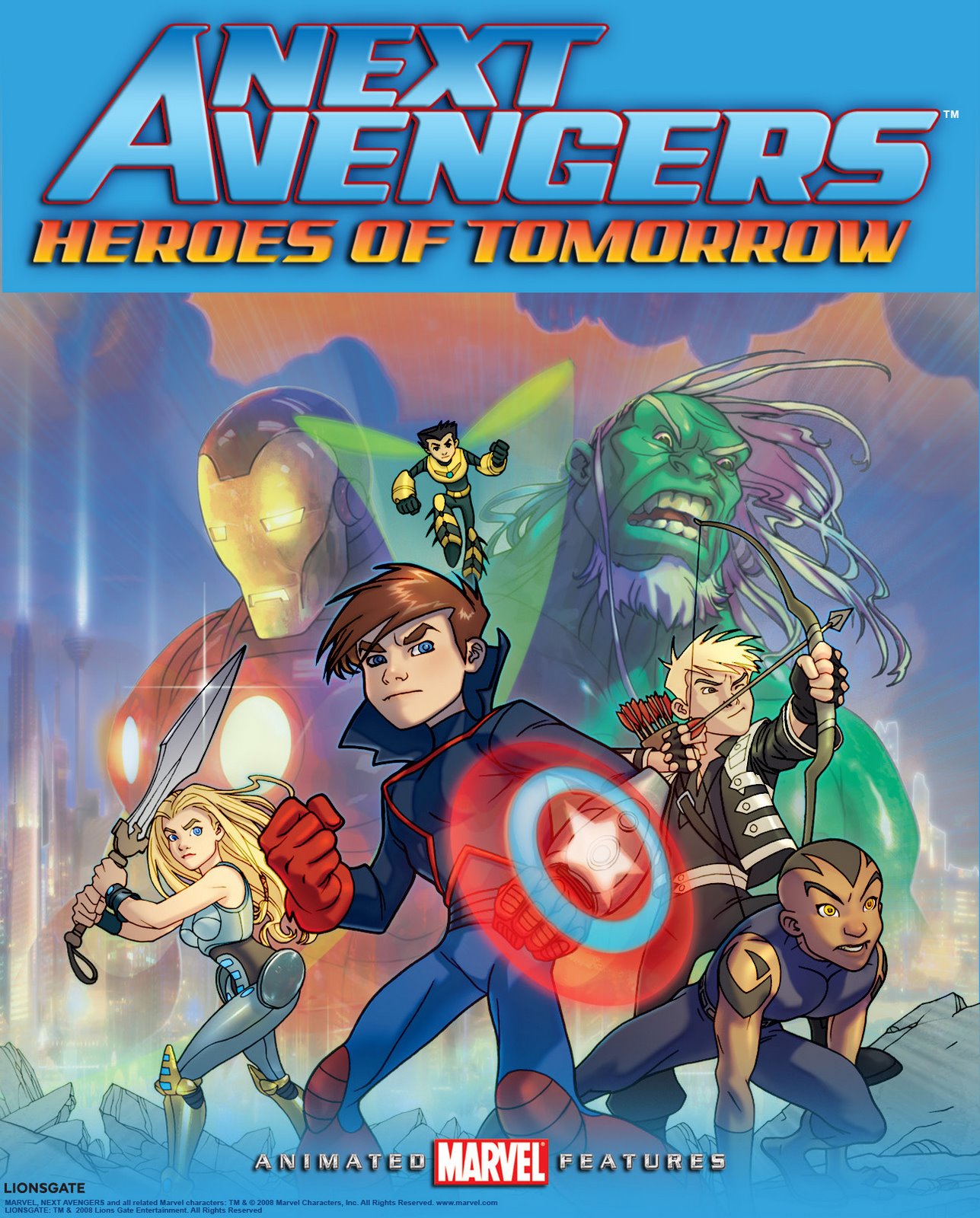 The plot takes place in the future of an alternate reality where five of the original eight Avengers have been killed off by Ultron, but not before most of them produced offspring that Tony Stark whisks to a secluded location, safe from the arms of evil. They are raised by the aging [[[Iron Man]]] and trained to use their powers, as James Rogers, son of [[[Captain America]]] and Black Widow; Pym, son of Giant-Man and Wasp; Azari, the son of Black Panther and Storm; and Torunn, the daughter of [[[Thor]]], who didn’t die, but just left Earth one day. Each of them posess an amalgam of their parents’ powers, and even some of their personality quirks as well. Their hideout becomes compromised, Iron Man gets kidnapped, and the kids must then go for the rescue, running into fellow heroes like an elder Hulk and Clint Barton’s son, Francis, taking the helm of Hawkeye.

The great thing about movie is the way they depict the “age of heroes” in the beginning of the film as a bedtime story to the children. The mythos is described almost biblically by referring to the Avengers with names like the Soldier, the Knight, and the Ghost (Cap, Iron Man, and Vision respectively). There are certainly enough wacky “kid” moments and bright colors to keep anybody under the age of 13 interested, but that stays balanced by the amount of mature themes throughout the film, such as abandonment issues, and a rite of passage subplot. The film touches on the subject of death and heroism that most kids would understand, but is clearly meant for adults.

The animation is the same used for Marvel’s [[[Ultimate Avengers]]] films, like a Japanese/American animation hybrid. The strongest element here is  BBC composer Guy Cichelmore’s (Ultimate Avengers) score. This sold the entire film in its epic interpretation. The voice work is mostly done with Marvel and Lionsgate’s in-house talent. Going in the opposite route that DC Animation had gone, the company uses mostly unknown actors and professional voice actors rather than pull in celebrity names. Much like the other Marvel animated films; this was the weakest element in the film, leaving us with a poor-sounding [[[Hulk]]] and Iron Man.

Overall, the film may borderline puerile at times, but makes for a nice competitor for DC’s leading animated series [[[Teen Titans]]]. There is certainly potential for a franchise here, and will most definitely do as well, if not better than the aforementioned show. It should also be mentioned how “ironic” it is that the only two established heroes that are alive and kicking throughout the film are the only two that had a major motion picture this year.There is certainly plenty of action and violence for us adults, and more than enough geek-fodder for the die-hards. A clear recommendation for any true Marvel fan. RATING: 8/10