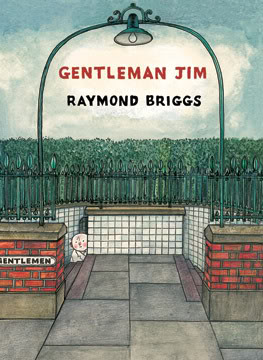 Like so many of the great cartoonists, Raymond Briggs operates almost in disguise, using his innocuous-appearing drawings and simpleton characters as a front while he delivers thoughtful commentary and a piercing wit.

The British pioneer of the graphic novel field (he was, at the very least, a contemporary of Will Eisner’s, though Briggs is too generally labeled a children’s book creator) offers up this sneaky blend of the adult and childish in the reprinting of [[[Gentleman Jim]]] (Drawn & Quarterly, $14.95).

The eponymous Jim is a bathroom cleaner with fantastic ambitions — in his mind. For years he’s been content to only dream of trying on a new career, and one day he finally decides to make those dreams real.

What follows is a seemingly childish series of adventures, as Jim attempts to enter unrealistic careers (a cowboy, a painter, a soldier) but is stymied at every stop.

Eventually he becomes dedicated on being a highwayman, stealing from the rich to benefit the poor. He buys fake weapons, creates a preposterous costume and brings home a pathetic donkey, then embarks on his misadventures.

Of course, this enterprise fails as well, which makes a simple enough little story. But what makes it so appreciable to a more mature audience — beyond Briggs’ delicate and beautifully composed art — is how he uses Jim as a foil to poke at the bureaucracies, laws and stuffiness of modern society that tamp down anyone daring to be odd.

Much as Charles Schulz and Richard Thompson instill children with adult sensibilities to great effect, Briggs does the reverse, making Jim both adult and childish, even giving him a baby’s broad face.

Like so many of Briggs’ characters, this allows Jim to be foolish and stupid but still endearing, a loveable bumbler who is deeply wise in his simplicity.