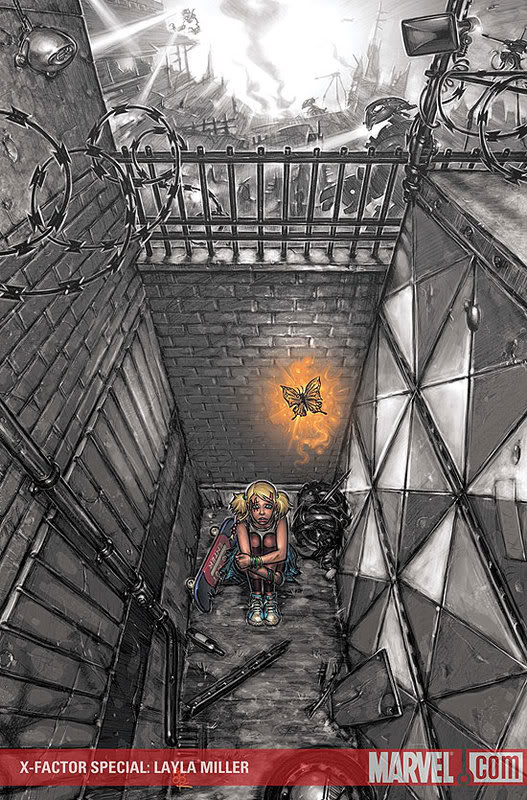 Though you can’t go to a comics convention panel without hearing some fan decry crossovers, it’s readily obvious why they keep appearing and tying up comics series: Crossovers sell.

As editors and creators quickly point out, slapping an event label on a comic cover can immediately boost sales by a healthy margin. And when books are struggling for readers, those opportunities are hard to pass up.

But for those who closely follow a particular series, crossovers certainly have the potential to seriously gum up the works, which is made evident with perfect clarity in the two issues of X-Factor released last week.

The issue from the main series has the main team in Detroit, sort of teaming up with She-Hulk to take down a Skrull attacker. The other, a Layla Miller special, has that character still stuck in the future, having some very strange adventures and knowing stuff.

The series proper has been one of my favorites since it started up again a few years ago, with Peter David knocking out  some of the best superheroics seen this decade. His scripts are smart, funny and well crafted, and continued reading makes clear how good he is at plotting stories out in the long term.

But the past two Secret Invasion tie-in issues have been easily the worst of the run, in part because of sub-standard art and in part because the Skrull situation feels as forced as it is. Even Jamie Madrox’s patented monologues lack their usual flair.

This is then highlighted (or perhaps lowlighted) by the brilliant Layla Miller issue, which is clearly Miller in more unadulterated form. Layla — herself a deus ex machina from House of M, another event/crossover — has been a driving force of X-Factor. But for now she’s relegated off to an alternate future, not coincidentally by the last X-Men crossover, Messiah Complex.

All told, the past year and a half of X-Factor has seen it cross over with three events (Civil War being the only one I haven’t mentioned yet). For fans of the series, all we can do is wonder what the book might have been if David had been left to his own devices.