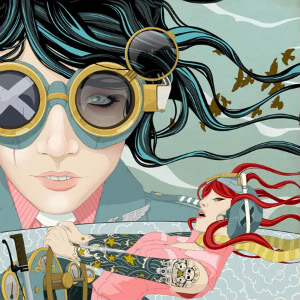 The past few months have brought a swell of attention to indie comics writer Elizabeth Genco, who scored a coup by having a story included in the Tori Amos Comic Book Tattoo collection from Image Comics, and then her graphic novel Blue — a modernization of the Bluebeard legend — sold well in part thanks to a plug from Brian Wood.

Genco took the time out of her busy schedule to chat with ComicMix about her music-infused projects and what it was like to work with an idol in Amos.

ComicMix: Let’s talk about the Tori Amos project first, since it’s the book of the moment. How did you get connected to that gig? Were you a fan of Amos previously?

Elizabeth Genco: I’ve been a fan of Tori’s for almost 15 years. Both she and her music have been hugely influential, especially in my creative life. Tori is very smart about how to create a creative career while staying true to your vision, and I learn from her. Of course, like many of her fans, her music has helped me through some dark times.

As for how I got involved, a few years ago, editor Rantz Hoseley and I got acquainted via Warren Ellis’ old board, The Enginge; he and I have been pals ever since. When he extended the invitation, I jumped onboard immediately.

CMix: How did you approach the assignment? Comics is such a visual medium, it’s not that common to hear creators be inspired by sound.

EG: I want to say that I’m not inspired by sound so much as I am by words — that is, lyrics. But the interesting thing about lyrics, of course, is that they take on a completely different meaning when you add the music. I would even go as far to say that 99 percent of the time, song lyrics are incomplete without the music. (Music is a huge influence on me, and I’ve aspired to be professional musician at several points in my life, especially when I was very young. So I’ve thought about this a lot, actually.)

Music inspires my writing quite often, and the process is usually the same. A line will capture my attention, and I’ll start noodling — following the thread, seeing where it goes. In this case, I decidedon the song and then went looking for that line.

As for the song itself ("Here. In My Head"), well, I spent all this time going through Tori’s catalog trying to find the right one before going, "Duh!" It’s been my favorite Tori song for years, so it wasthe obvious choice.

CMix: Can you shed a little light on your story in the collection?

EG: "Here. In My Head" has always been a song of longing for me, a song about being so hopelessly caught up in someone that they’re with you all the time, even when they’re not with you. It’s about a relationship that’s firmly one thing when you want it to be another thing, a much deeper and bigger thing, but the boy has someone else on his mind. And so he goes about his business in his oblivious guy way, thinking things are what they are, when they most certainly are NOT. And every move he makes just twists the knife.

He’s not trying to be an asshole. You’re friends, right? It just sucks to be you. And when you have to decide if you’re going to give up being human forever, it’s worse. The line I eventually hit on was, "You’re counting my feathers as the bells toll." Our girl is part bird, part human.

CMix: Have you had the chance to meet Amos? Were you worried about how she’d react to your story?

EG: I met Tori at San Diego when I was a part of the panel. She is positively lovely, of course. So warm and generous, and such a presence.

I’ve heard several of the creators talk about how they were terrified of not living up to the source material. It’s kind of funny, perhaps, but I didn’t feel that way. I absolutely did feel that I needed to bring my A game. But I just wasn’t intimidated by this project. On the contrary, it felt really natural.

Maybe it’s because sometimes music has this way of bringing you closer to its creator. Of course I would never presume that closeness in real life! But Tori does feel like a friend, having really grown as a person with her music over all these years. And just knowing how much she values artistic freedom took a lot of the pressure off. So I put my focus on telling the story.

CMix: It seems like celebrity-attached comics are becoming more common as the medium grows. Is that kind of project something you’d like to do again?

EG: I would love to! Of course, it would entirely depend on the who. There is talk here and there about a Tom Waits book, for example. Waits, Pixies, or my favorite lyricist ever in the history of anything, Elvis Costello… I’m there.

CMix: Onto Blue… You based this on the old Bluebeard tale, right? That’s not a  very well-known story. Why was it important enough to you to update it? 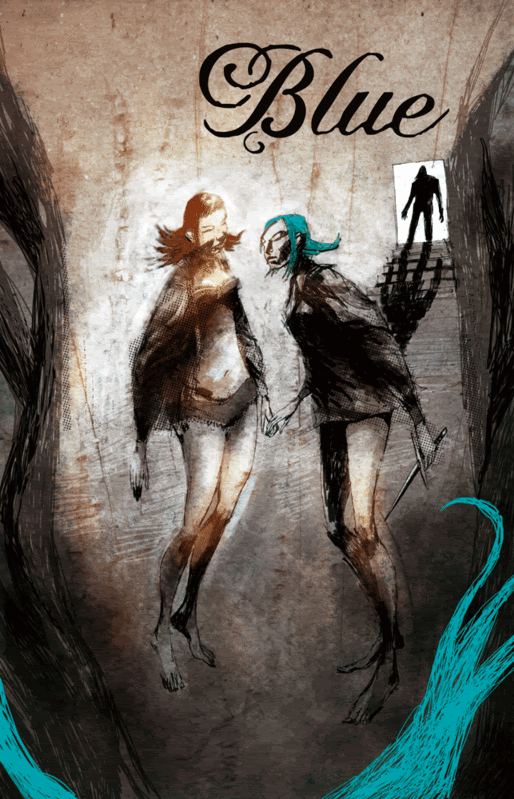 EG: Fairy tales, folk tales, ballads, myths and old stories — these are my muses, background music and instruction manuals. I can’t remember how I originally came to Bluebeard. I did a version of Red Riding Hood, too (Red, illustrated by Kevin Colden — it’ll be in the No Formula anthology due out soon), so I may have been thinking about predators when the idea first hit me.

The Bluebeard ending has always bothered me. In the most popular old version of story (from Charles Perrault), the young woman is rescued from her fate in this total "deus-ex-machina" kind of move. I guess that’s where it really began. So I started noodling, and found a story about a girl who needs to get the hell over herself and draw on her own resources. That’s really want it’s about — finding that strength in yourself when it’s all-or-nothing. Not usually the theme of Bluebeard, but the story was just a starting point, of course.

CMix: Your version is quite a bit different, maybe most notably for the protagonist’s ability to change into animals. How did that element work itself into the story?

EG: Shape-shifting tends to work its way into a lot of what I do, because personal transformation is one of my Big Themes. Entelechy, which is a concept from Aristotle. Potential made real. How we become what we are becoming. Shape-shifting is a great metaphor for that, so it shows up a lot. (It’s in "Here. In My Head" too.)

CMix: Again, music played a role in this story. Was that your intent from the get-go?

EG: Actually, no! That came later, my first envisioning was a lot different. But I used to be a busker, playing fiddle in the New York City subways. I think I drew on some of that.

CMix: How did you get connected to the artist, and how does the final art fit with what you’d envisioned for the story?

EG: Sami and I found each other on The Engine (I think!). In my dreams, I couldn’t have asked for more, art-wise. He was just perfect for it.

CMix: The book has had a nice reception, including a shout-out from Brian Wood. Have you been surprised at all with how it’s done?

EG: Oh, gosh, I didn’t know what to expect! I still don’t. Brian’s support really meant a lot to me and I know it has helped the book.

I’ll say, too, that I’m absolutely positively over-the-moon thrilled with the production value of the thing. The book is gorgeous. Joe Pruett at Desperado really took a chance on us with that spot color, and I’m so grateful. Meanwhile, Sami just knocked himself out, from beginning to end. I felt like the luckiest girl in the world on the day that comps showed up, let me tell ya!

CMix: Do you do any writing outside of comics? And how did you get into comics?

EG: How I got into comics is a long story… way too long to tell here! I will say that it involved having a crush on someone. I’ll also say that I’ve been reading comics for years and years. I was one of those sisters-with-a-brother-who-is-into-comics.

I do lots of writing outside of comics, too — probably way more than I should! (I’ve begrudgingly come to accept that "just one passion" is not my path.) I have prose projects that I have picked up and put down over the years.

I actually find prose fiction to be much more challenging than comics. No pictures means no cheating — i.e., no artist to help you pick up the slack on creating those perfect images in the reader’s mind.

CMix: Anything else you’re working on now?

EG: Yes! And I have a couple more things coming out soon. One is a story over at Smith magazine, for their Next Door Neighbor series. The other is No Formula, an anthology of stories from The Chemistry Set, a Web comic collective I co-founded. (No Formula is also from Desperado Publishing.)

As to new stuff, at last count, I have five short stories in the works. Sami and I really like working together, so we’ll be doing a short for Weird Tales magazine. Kevin Colden (another Chemsetter and past collaborator) and I will be creating a piece for an anthology due out next year (I don’t know if it has been announced yet). Andrew Drilon, John Bivens and Mario Boon are all either working on shorts of mine, or are patiently waiting for scripts.

I’m also hard at work on two graphic novels. One is the next fairy tale project, which will be my attempt at bringing some old school urban fantasy spirit (a la fantasy luminaries Terri Windling, Midori Snyder, Charles DeLint, etc) into the comics world. In other words, expect fairies! Only not the happy, sugary-sweet Victorian kind.

The other book is called The Kiss. It’ll feature Aphrodite, and lots of pretty girls making out!