Is Hillary Clinton Really The Thing? By Dennis O’Neil 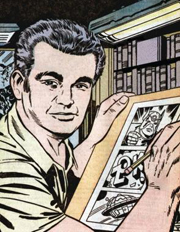 I never talked to either Jack Kirby or Stan Lee about politics, so I don’t really have any idea where they stood on the subject. My guess would be that following their political spoor wouldn’t take you very far west and that they didn’t have much sympathy for the hippie-rebels of the 60s (and here allow me to blush and hide my face). After all, they and their parents (and my parents) fought for a place in the American mainstream because, finally, acceptance meant an increased chance of survival and for those outside the tribe, who suffered the Great Depression, not surviving seemed to be a real possibility. Then here came the snotty kids with their tie-dye and their girly haircuts and their wiseass slogans saying that a place in the tribe was not worth struggling for – in fact, the tribe itself was stinking of corruption.

Both generations were, in their own way, right; both had a piece of the truth.

Stan and Jack were – are – of the first of the two generations and so they were – are – probably politically a bit to the right of me and maybe you (and my parent and most of my siblings.) But events of the past week make me guess that their greatest creations were liberals. I refer to the Fantastic Four who, along with Spider-Man co-launched Marvel Comics, as one or two of you might have heard. True FF aficionados know, and perhaps relish, the tendency of the members of this supergroup to squabble among themselves. Two of the four, The Human Torch and The Thing, seem particularly apt to indulge in petty argumentation.

Remind you of any particular political group?

Yeah, right. Liberals. Witness the recent news: Ms. Hillary Clinton’s die-hard supporters are threatening to vote for John McCain, the Republican candidate, unless Ms. Clinton’s presidential aspirations are accorded full acknowledgement at the Democratic convention, which will be soaking up media time in about two weeks. This despite the fact that Ms. Clinton has already lost the nomination to Barack Obama, whose crew must be thinking harsh and uncharitable thoughts about the Clintonites.

Want more? Okay, early last weekend the one-time contender for the Democratic nomination, John Edwards, did not manage an end run around some tabloid reporters who confirmed rumors that this upstanding Democratic paragon, who had made a mighty noise about family values and, yes, The Lord, had dallied carnally with a campaign aid, a woman hired to shoot pictures. Of course, such dalliance seems to often come with the politician’s territory; many, if not most, of our Alpha Pols dallied thus, and were good leaders anyway. But did the story have to break a fortnight before the convention and thus give Obama’s enemies a shiny distraction from matters such as a faltering economy and an unjustified war?

The Torch and The Thing bitch a lot, but they keep their pants on and when Dr. Doom is pounding the door, they unite to face the common enemy.

Any of my fellow liberals feel like reading a comic book?

RECOMMENDED READING: Plato and a Platypus Walk into a Bar… by Thomas Cathcart and Daniel Klein.

Dennis O’Neil is an award-winning editor and writer of Batman, The Question, Iron Man, Green Lantern, Green Arrow, and The Shadow – among others – as well as many novels, stories and articles. The Question: Epitaph For A Hero, reprinting the third six issues of his classic series with artists Denys Cowan and Rick Magyar, will be on sale in September, and his novelization of the movie The Dark Knight is on sale right now. He’ll be taking another shot at the ol’ Bat in an upcoming story-arc, too.