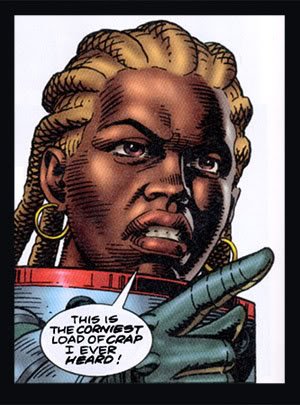 Dark Horse was nice enough to compile a full list of the publisher’s announcements out of San Diego (including a new Martha Washington — at right — book).

That’s very appreciated, as the lunacy of Comic-Con made it impossible last week to keep up with everything every publisher was doing — though our ComicMix team did their best to bring you as much news as possible.

Any publishers who want to send over similar news dispatches can hit us up through the usual channels.

After the jump is Dark Horse’s complete news breakdown, listed by day.

AppleGeeks vol. 1- A collection of the webcomics published on applegeeks.com in 2003 and 2004. Drawn by Mohammad F. Haque (Hawk) and written by Ananth Panagariya, AppleGeeks falls in the category of computer humor about college students and their homemade robots. The book will include creator commentary and other bonus material, including a pinup gallery. It will be printed in full color and will go on sale in June 2009 for $14.95.

Mister X Archives and New Series- Dean Motter’s alternative comics masterpiece Mister X is being reprinted and bound in a brand-new hardcover archives series, along with brand-new stories to be written. Mister X Archives will feature the artwork of young superstars Jaime Hernandez and Dave McKean. And now, after 25 years of waiting, fans get a new taste of Mister X. Motter returns to write and draw an all-new story starring his most influential creation. Archives will be released in the fall of 2008.

Spawn of Domo- This spring saw the release of an 8” limited-edition flocked vinyl Domo in a myriad of custom colors (including the SDCC Exclusive Yellow Domo) that was met with extreme enthusiasm from the vinyl toy community—in many cases selling out before they hit the shelves. This fall, Dark Horse will release a new collection of brilliant custom-colored flocked Domo in 5.5” vinyl figures. In addition to the Classic Brown Domo, the 5.5” figures will be available in Olive Green, Ruby Red, Earl Grey, and Polar White. Each of the custom colors will be limited to 800 pieces worldwide, except the white variant, which is capped at only 500 pieces. Look for additional custom color variants from at least two selected retail partners.

Vampire Hunter D Bust- Dark Horse Deluxe has just announced they will be releasing a black-and-white variant of the Vampire Hunter D bust scheduled for release in November 2008. Based on the character by Japanese author Hideyuki Kikuchi and illustrated by Yoshitaka Amano, the 8.5” variant bust will be limited and numbered and will include a certificate of authenticity. Edition size to be determined.

B.P.R.D.: 1947- After the overwhelming praise from fans and critics alike, Josh Dysart returns to the Hellboy universe for B.P.R.D.: 1947, the follow-up to this year’s acclaimed B.P.R.D.:1946 series, chronicling the early exploits of this organization, founded by Professor Bruttenholm—occult investigator and guardian of the infant Hellboy. This new series picks up the following year, after the Nazi Project Vampir Sturm threatened to destroy the fragile peace following the end of the second World War. A year later, the fledgling B.P.R.D. learns that there are creatures far older—and far more dangerous—than Hitler’s creations, as a lone vampire nobleman ruthlessly hunts the survivors of the Third Reich. Mike Mignola, along with Josh Dysart, plot out the next chapter in the history of comics’ not-so-secret organization. This time, sequential heartthrobs Gabriel Bá (Umbrella Academy) and Fábio Moon (Sugarshock) come on board to handle the artistic duties. Arriving on shelves in June 2009.

Boris Karloff’s Tales of Mystery- Dark Horse will be collecting this long-gone, but not forgotten, Gold Key series, bearing the namesake of one of the earliest and most recognizable faces of horror. The newest addition to the Dark Horse Archives program, and following on the heels of the legendary Creepy and Eerie, these highly sought-after comics are most well known for their stunning cover art. All 97 issues will eventually be collected in a series of beautifully bound hardcover books. The first volume hits the shelf in 2009.

Cages TPB- Dark Horse Comics is reprinting Dave McKean’s masterpiece, Cages, in a ten-issue comic book limited series. It was originally released between 1990 and 1996 and Cages is the only work that McKean has both written and drawn. McKean is possibly the most widely known of the current artists creating comics for adults; he painted the covers of all 75 Sandman issues and has also drawn The Black Orchid and Violent Cases. Cages is due to be released in the summer of 2009.

New Creepy comic- The new Creepy will be a quarterly black-and-white anthology closely mirroring the aesthetic of the original magazine, but in standard comic-book size. This will be the first new Creepy story in more than 25 years and will be published on MySpace Dark Horse Presents in October. The comic book will come out in the spring of 2009. There will also be a two-page introduction to the newly extended “Creepy family,”illustrated by Jeff Preston.

The Marquis- Guy Davis’s creator-owned masterpiece comes to Dark Horse, with a new deluxe edition collecting both of the previously released Oni volumes. This upcoming collection, entitled The Marquis: Inferno, collects both TPBs, Danse Macabre and Intermezzo, and will feature a new cover design, as well as an introduction by Mike Mignola. Dark Horse will also announce the upcoming third volume, The Marquis and the Midwife, to be released in 2010.

Frank Miller: The Spirit Storyboards- Dark Horse proudly presents an insight into what promises to be one of the hottest films of the year, and the directorial mind of Frank Miller. This book will collect every single storyboard drawn by the comics legend himself, as well as the full screenplay for the film. Featuring beautiful, fully inked and detailed artwork in Frank’s inimitable, larger than life style, this book will be an essential edition to any collection. Arriving in stores in 2009.

Shinjuku- Dark Horse Comics is proud to introduce Shinjuku, the first totally original project by Yoshitaka Amano in nearly a decade. Set in the year 2020, Shinjuku is the story of Daniel Legend, an American Special Forces soldier turned licensed private bounty hunter. He is a loner who travels the globe capturing criminals and now must journey to Shinjuku, Tokyo, to save his sister. Armed with his wits, metal storm pistol and a mysterious, cryptic five-year-old postcard, Simon sets out to save his family and accidentally saves the world. Shinjuku is set for release in the summer of 2009.

Star Wars: The Clone Wars- Dark Horse Comics will showcase the first look at the highly anticipated The Clone Wars comics and digest series! Each will be the perfect compliment to Lucasfilm’s highly anticipated CGI-animated The Clone Wars movie and television programs! With Henry Gilroy handling the story for both new series, the digests will feature art by Matt and Shawn Fillbach, with Scott Hepburn penciling the comics. While the digests feature standalone stories designed to be read in any order, the comics will tell an ongoing story set between Attack of the Clones and Revenge of the Sith. Both new series are sure to please a whole new generation of Star Wars fans of all ages. Each is set for release in the month of September.

The Adventures of Blanche HC- Dark Horse Comics and iconoclastic cartoonist Rick Geary are proud to present The Adventures of Blanche. Long out of print and collected here for the first time, these quirky and nostalgic tales of Blanche get the deluxe treatment in this hardcover volume featuring an all-new introductory story. From New York to Hollywood, and all the way to Paris, Blanche embarks on the extraordinary adventures of an equally extraordinary woman of the early twentieth century. Blanche is due to be released in early 2009.

[Check out the ComicMix interview with Rick Geary on this one!]

Rex Mundi: Hill of Martyrs- Rex Mundi returns to its roots with a brand-new Brother Matthew mystery. A servant girl is brutally murdered in an elite Paris hotel. Mystified by the horrific crime, the Inquisition puts Brother Matthew on the case. Matthew’s partner? None other than the cheerful Inquisitor Moricant! In celebration of the final chapter of this critically acclaimed series, Dark Horse, in conjunction with Comic Book Resources, will present Brother Matthew: Hill of Martyrs completely free online, every week in between Rex Mundi issues 13 and l4. The story will begin on CBR exclusively on August 20.

World Embryo- Dark Horse is proud to present World Embryo, the latest creation by Daisuke Moriyama (Chrono Crusade). This is a majorly dark seinen series. In a time where heroes are unrecognized and forgotten, viruses can be transmitted by a cell-phone call, and unseen monsters hunt the innocent, the fate of the world rests in the hands of a secret organization called FLAG and on the shoulders of a high-school teen. World Embryo is scheduled for release in the summer of 2009.

Devil- Dark Horse Comics and Madhouse Studios (Trigun, Hellboy Animated, Tenjho Tenge) team up to release a series by Japanese manga author/illustrator Torajiro Kishi, created exclusively for publication in the United States. An incurable disease called Devil’s Possession is rapidly infecting the population with symptoms that cause slow and painful death. The discovery of a unique category of the infected, the Class-S Devils, raises the question of whether the infected are victims of the virus or a new breed of human predator.

Rapture- Rapture is a story that takes place one year after a century-long war between superheroes and villains nearly decimated the earth . . . then they all disappeared. Like a Rapture, the Powers were just gone. Everything else, no matter how crazy or fantastic, is really the backdrop to the love story between Evelyn and Gil—two mortal survivors of the superhero apocalypse. Rapture is about how Love and Power are forces that can possess you and make you do things you don’t want to do. You would destroy everything to keep it and even destroy yourself to get rid of it. This story is about the worst breakup ever.

Neon Genesis Evangelion: The Shinji Ikari Raising Project- Dark Horse is proud to present Osamu Takahashi’s manga Neon Genesis Evangelion: The Shinji Ikari Raising Project. Inspired by the final episode of the Evangelion TV show, this manga series imagines a story where the anime’s lead characters, Shinji, Rei, and Asuka, didn’t live the brutal existence of the main saga, but, rather, lived in an alternate world where friendship and romance could be as important as their task to pilot the Evangelion. The series is slated to kick off in summer of 2009 and carry a cost of $9.95.

The Spirit- DH Deluxe presents two highly collectible items from Frank Miller’s film adaptation of Will Eisner’s The Spirit. There will be a full-size, limited-edition statue, sculpted by character artist Kolby Jukes, as well as a limited-edition bust sculpted by Oluf Hartvigson, both depicting the likeness of Gabriel Macht as the Spirit, in a dramatic pose envisioned in the moody "neo-noir" palette Miller brings to the screen. In addition, there will be a unique, light-up journal featuring a classic Spirit silhouette on a background of twinkly snow illuminated by a timed sequence of concealed LED lights embedded in the cover.